Cause and extent of petroleum spill remain unknown 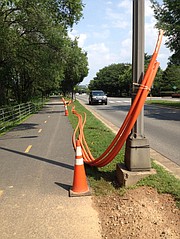 Four Mile Run is normally a scenic stream that divides Arlington and Alexandria, but on July 1, the public was told to stay away from the area due to contamination from a petroleum discharge. Arlington County Fire Department and the Department of Environmental Services (DES) set out containment booms but advised the public to remain out of the water until July 4. One week later, the full cause and size of the spill remains under investigation.

“The investigation is ongoing, so the exact quantity of [petroleum] is unknown, but this is considered a smaller spill,” said Jessica Baxter, a spokesperson with Arlington DES. “There is no evidence of new or continuing discharge.”

Baxter said the containment booms were sufficient to control the contamination.

While the DES continues to inves 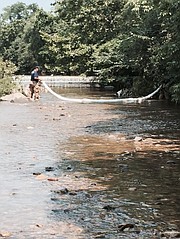 tigate the full extent of the spill, the Arlington County Fire Department is investigating the source of the spill. Sarah Marchegiani, a spokesperson for the Arlington County Fire Department, said that the nearby Automotive Express at 2705 South Oakland St. had been seen by Fire Department officials spraying a motor down with oil and improperly disposing of petroleum discharge. However, Marchegiani currently believes the incident with Automotive Express and the larger spill are unrelated.

“That was one source identified,” said Marchegiani, “but we don’t believe that it was the cause of the larger spill.”

According to a tweet by the Arlington Fire Department, the spill entered the stream through a nearby culvert and likely originated from being dumped or spilled into a manhole. The stream was re-opened to the public on July 4.