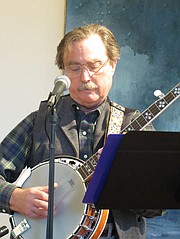 At “Wailin’ Ghosts of the Civil War,” a small group of Alexandrians gathered to hear the music and poetry of the Civil War on July 9 at the Athenaeum. Edgar Poe, a South Carolinian banjo player, performed songs from the Civil War between poetry from the era read by Peter Lattu, a local poet.

“The Civil War is still very much with us,” said Poe. “We still have streets named after Confederate generals, the wounded from Manassas were brought to this very building. It’s hard to escape it, it’s all around us.”

The performance opened and closed with a poem by Poe in tribute to the victims of the recent shooting at the Emanuel African Methodist Episcopal Church, titled “Nine Dead in Charleston.” Lattu also included poetry connected to local events, such as a poem about the shooting of James Jackson and Col. Elmer Ellsworth at the Marshall House during a Union attempt to remove the Confederate flag from the building. The selection of poetry also included poetry about the lives of women and African Americans during the Civil War, an approach Lattu said was encouraged by his wife, Alison Lattu. Part of the poetry selection included the Gettysburg Address accompanied by Poe softly playing the Southern anthem “Dixie” on the banjo. While it wasn’t a poem, Peter Lattu said he still felt it was important to include the address.

“It seemed appropriate to have an acknowledgement of the dead, and Lincoln said it best,” said Peter Lattu.

Danielle Weintraub said she thought the performance was fantastic and deserved a better crowd than the four Alexandrians who’d turned out to watch the performance.

“I really enjoyed it,” said Tony Bates, “I’m just sorry the audience was so small.”