Column: By Right Development: Does It Work for Chesapeake Bay?
Votes

Column: By Right Development: Does It Work for Chesapeake Bay?

By right development refers to projects that are permitted under their current zoning and do not require any legislative action by the Board of Supervisors or the Board of Zoning Appeals. 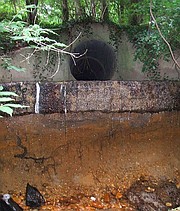 They are approved administratively and do not require public hearings.

The Fairfax County Zoning Ordinance designates five areas of the county as Commercial Revitalization Districts (CRD). Richmond Highway is one such district and the purpose of these designations is to encourage economic development activities in certain of the older commercial areas of the county.

Highlights of CRD Provisions for By Right Development basically incentivize developers by a lessening of standards for development as would be required in non CRD areas and is advertized in their brochure as a benefit to developers.

While this practice seems necessary to spur development there is an overlooked aspect that is actually detrimental and costly to the communities meant to benefit from the economic development.

The instance involving the Kings Crossing development where JBG Rosenfeld built the second Wal-Mart on Richmond Highway on the footprint of an older ‘60s era shopping center under their current zoning was a by-right development that did not require any public hearings. As a consequence the developer was not required to do any infrastructure improvements involving storm water thus leaving in place a 50-year-old storm water system that is acknowledged by Fairfax County agencies as being detrimental to the Belle Haven watershed. There are two major outfall pipes that empty directly onto land that was donated to Fairfax County for the purpose of becoming a community park. The combination of water volume during rain events and direct flow from parking lots into these pipes both severely erode and pollute Quander Brook. By right development under these circumstances is essentially a free pass for businesses to pollute.

This kind of problem is manifest throughout the Commonwealth in municipalities and cities with older developed commercial and residential areas and is a contributing factor to the low report card grades assigned to the Chesapeake Bay and its tributaries on an annual basis. Just how can state government and county governments pass legislation and ordinances to protect the Chesapeake Bay yet not plug this point source pollution hole into the bay tributaries?

Pope Francis recently said “Creation is not a possession, which we can rule over at will; nor, even less, is it a property for only a few: Creation is a gift, the marvelous gift that God has given us, so that we will care for it and use it for the benefit of all, always with great respect and gratitude.” Where is the respect and gratitude for this once pristine watershed in one of the Commonwealth’s richest counties?

Such by right development is a consequence of Virginia being a Dillon Rule State. The Dillon Rule limits a local governing body’s ability to address local issues using local strategies exercised under its police power. As a result, a locality’s ability to address local issues is at the mercy of the General Assembly. A locality’s governing body does not have broad general authority to adopt whatever ordinance it deems appropriate or desirable. The Virginia Chamber of Commerce has stated that the Dillon Rule “represents a positive tradition of legislative oversight” and encourages economic growth through a consistency in laws throughout the state.” Right now it appears that we have a consistency of laws that permit developers and businesses to pollute with encouragement from the Commonwealth. This is both a local and a state issue that needs more scrutiny and the commitment of elected officials to put an end to a pollution loophole that must be stopped. I look forward to hearing candidates for state and county offices to address how they will use their office to tackle this glaring problem.

Part 2 will focus on possible solutions to address this issue.

The author is a Mount Vernon resident since 1981. A retired science educator from Prince George's County Public Schools, he taught K-12 science at the Howard B. Owens Science Center in Greenbelt, Md., as well as community college, university and adult education classes in natural history, physical geology, ecology and environmental science.