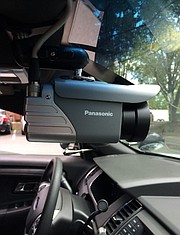 Police cruisers in the in-car video program have both front- and rear-mounted cameras that can swivel from side to side.

In a January 2015 informational video, Fairfax County Police said around 600 of the department’s cruisers, spread across all eight law enforcement districts, were equipped with in-car video recording devices. Updated guidelines for the video program were announced as General Order 430.8. It can be found online here.

In the five-minute video, officers explain how cruisers with the system have both front- and rear-mounted swiveling cameras linked to a digital video recorder and wireless microphone worn by the officer. The camera program was phased in over a 10-month period beginning in September 2013.

As soon as an officer starts the video, or recording starts automatically, the previous 30 seconds are captured as well. This is possible because the digital video is constantly running, just not constantly recording.

The 30-second add-on allows officers a better chance to document the offense they’ve just witnessed, and for judges or juries to have a more complete picture of whatever interaction took place between the alleged offender and officer.