A month for spiritual renewal. 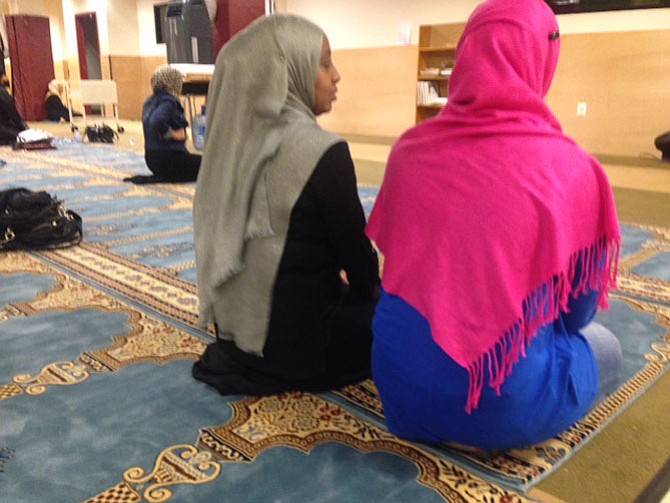 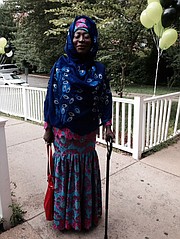 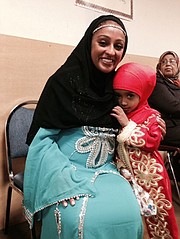 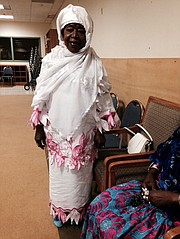 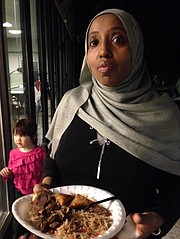 Amal Yousef at an Iftar dinner at the Muslim American Society Community Center. 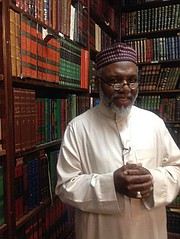 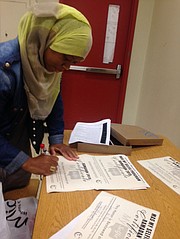 This Friday marked the end of Ramadan, the month of fasting, for Muslims. For many area Muslims, Ramadan has meant going without food and drink from sunrise until sunset. Many evenings were spent at their local mosques praying, visiting with others, and eating iftar dinner, the first meal after breaking a day’s fast.

During one such evening iftar, a young Arlingtonian family from Ethiopia, Amal Yousef, her daughter Lula, 13 and son Nadim,10, make their way through crowded food lines at the Muslim American Society Community Center (MAS). The center, holds prayers, has programs and events for Muslim families from all over the region. The Yousefs are here many evenings during Ramadan. Samosas, rice, soup, and fried breads, and meat dishes line the tables.

After a long day of fasting that started around 5:30 a.m. ended around 8:30 p.m., Amal gets a plate of food. Even still she waits, allowing her food to grow cold as she takes time to speak about her experience during Ramadan. “It’s a time for recharging yourself for the next 11 months. It’s like 30 days of training,” she said.

The training she speaks of goes beyond not eating or drinking. Ramadan is meant to be a time for spiritual renewal and reconnecting with the community. During the fasting hours Muslims are expected to abstain from smoking and sexual activity and curb negative acts such as gossiping and backbiting. “Ramadan gives you an opportunity to think about a higher power,” said Imam Johari Abdul-Malik at Dar Al-Hijrah Islamic Center in Falls Church.

During Ramadan, “You try to help others. You practice charity, even if it’s just offering someone a smile,” said Yousef. “You’re concentrating on your prayers. It’s a time to look beyond ones own needs.” As she abstains from food she says, “I think about the poor and kids who don’t have.”

She encourages the same for her children. Both Nadim and Lula are fasting. “Going to the masjid everyday. Being with your friends,” says Lula when describing what she likes about Ramadan. What’s been hard about fasting? “Being around people when they’re all eating,” she says.

During Ramadan Yousef takes care to go the extra mile when she cooks. She awakens her son Nadim early in the morning for suhur (the meal just before sunrise) to eat. “They want different things to ea,t” Amal says of her children’s appetites. “So, I start preparing it. I have to do it. They deserve it,” she laughs.

Many of Lula’s Ramadan afternoons have been spent at MAS in its My Selfie program for middle-school aged youth. The program is designed to create a sense of community among Muslim youth while promoting leadership skills and empowerment. In the spirit of Ramadan, Lula along with the other My Selfie participants created a free library, which they erected outside of the MAS center. The idea is to promote the exchange of books among MAS members as well as with the broader community.

“The library is for everyone.” said Shelly Mckinney, My Selfie’s founder and program director. “Our goal was to have the kids give back their community.”

“I helped with the library a lot,”, said Lula. “I helped sand it and paint it.”

The Muslim holiday, Eid Al-Fitr, marks the end of the month of Ramadan. For Muslims around the world, the day includes prayer, family and friends coming together, and activities and gifts for children. On the morning of Eid Al-Fitr, women stream into the prayer room at the MAS center. “It’s a day with no worries,” said Fatima Mangera, sitting awaiting the Eid prayer with her daughters and newborn son.

“It brings you great satisfaction after a whole month of fasting and hard work,” said her daughter, Raieesa Norat, 13.

Eid Al-Fitr prayer in Northern Virginia can often feel like an international event. “It’s a blessing. It’s like being in Mecca (the Muslim holy city),” said Mangera about the international ambiance. She and her family moved to the area from the United Kingdom. For most cultures Eid Al-Fitr is a day to wear one’s best. A menagerie of colors and fabrics swirl and flow about the prayer room. Each woman is in the traditional festive wear of her country.

Mariatu Kargbo and her sister Memuna Mustapha, awaiting prayer, are bedecked in colorful African garb with neatly wrapped headdresses. They are from Sierra Leone. “We cook and eat. Then we give out food,” said Mustapha.

Two seats away is Neda Samuels, a band of sparkling crystals is strung across her forehead, her outfit is encrusted with intricate beadwork. She is from Yemen. “It’s a happy day,” she said. “We decorate for the kids. We eat breakfast. The kids open their gifts. We try to do activities and play games,” she says while pulling her young neice Ayha Kaid, 4 in close for a hug.

“We are sad to see Ramadan end. For Muslim people, we miss the atmosphere,” said Laila Hussein. It’s the afternoon on Eid Al-Fitr, Hussein and her granddaughter Farah Hisham, 10, of Crystal City are shopping at Target in Potomac Yards. They are from Yemen. “We give money. Men give the women and children money,” she said.

What will young Farah do with her Eid money? She smiles: “I’m going to buy a chair for my doll.”