Mount Vernon: Not Willing To Wait 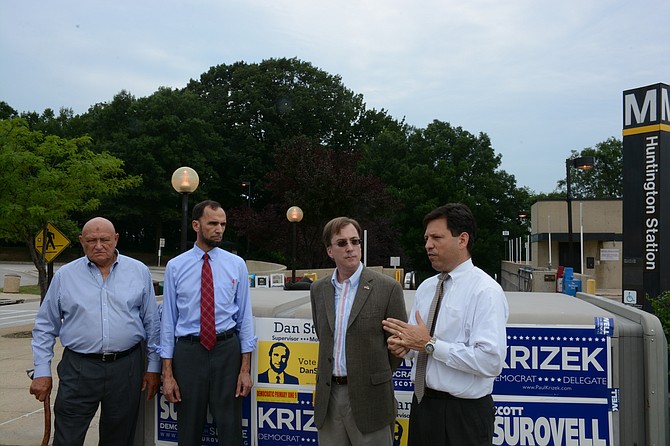 From left: Supervisor Gerry Hyland (D), candidate for Mount Vernon supervisor Dan Storck, candidate for 44th District delegate Paul Krizek and candidate for 36th District senate seat and Del. Scott Surovell (D-44) are in favor of speeding up the timeline to bring bus rapid transit and an extension of the Metro Yellow Line in the Route 1 corridor. Photo by Tim Peterson.

Waiting at least 11 years for implementing a Bus Rapid Transit system along the Route 1 corridor and 25 years to extend the Metrorail Yellow Line to Hybla Valley is too much time. That was the sentiment expressed by four Democrats who met July 21 at the entrance to the Huntington Yellow Line Metrorail stop.

Del. Scott Surovell (D-44) recapped the November 2014 conclusion of a $2 million Route 1 Multimodal Study that analyzed options for relieving crippling traffic throughout the major roadway. The analysis resulted in a four-phase proposal including widening Route 1 to six lanes, adding a Bus Rapid Transit program and extending the Yellow Line.

The plan “is hampered by the current timetable,” said Surovell, who is also a candidate for the 36th District state senate seat.

“This is a quality of life issue for those living in Mount Vernon, Prince William and Stafford,” Surovell continued. “People waited decades for a blueprint and this recommendation finally provides a vision for the future of our community. We can’t afford to wait 25 years to fully implement it.”

Paul Krizek, who is currently running unopposed for Surovell’s 44th District delegate seat, said of Mount Vernon, “With Fort Belvoir employing more people than the Pentagon and limited transit options, commuters and residents face some of the worst traffic in Northern Virginia.”

“We’ve been patiently waiting for our opportunity here,” he added. “We’re no longer that sleepy bedroom community.”

Mount Vernon School Board member Dan Storck, who won the Democratic primary for Mount Vernon district supervisor, said, “The key part is to get our fair share down here. We need a public commitment now. It simply can’t wait. The expansion of our public transit system and widening Route 1 creates jobs and new opportunities for all of Fairfax County, especially our residents along the Route 1 corridor.”

Outgoing District Supervisor Gerry Hyland (D-Mount Vernon) momentarily lightened the tone of the press conference, referring to the bicycle racks near where the men were standing. “These are three candidates who don’t soft-pedal on the issues.”

More seriously, Hyland commented on Route 1 traffic that is “completely deadlocked” and that “moving the timetable up is absolutely necessary for the future of Mount Vernon and Lee Districts.”

Surovell believes it would be feasible to implement Bus Rapid Transit throughout the corridor within 10 years and to have Metro in 15 years. This would require rapid work to modify the county’s Comprehensive Plan and, more importantly, getting creative about funding sources.

Some of the delegate’s ideas include pushing the project to the “head of the line” in Virginia’s $300 million transportation fund, the Virginia Commonwealth Transportation Board, the Federal Transit Administration’s “New Start” program, local government and the United States Army.

Dumfries Mayor Jerry Foreman is a Republican running against Surovell for the 36th District Senate seat.

“Residents and business owners that drive and work along the Route 1 corridor are tired of funding studies and want to see results with construction and congestion relief,” he said in an email. “That’s why I have been a leading voice in support of HB-2 (Funding the Right Transportation Projects), HB-599 (Transportation – Long Range Planning) and HB-2313 (Transportation – Revenues and Appropriations) and of a cohesive, regional approach to improving the Route 1 corridor, and a supporter of high-speed commuter trains to ease traffic congestion. As a commissioner on both the Northern Virginia Regional Commission and the Northern Virginia Transportation Authority, I understand transportation is a regional matter.”

In an email, she said, “A business owner said to me today: ‘Just drive to Fairfax and see utilities are underground, intersections and medians are beautifully landscaped and maintained. Why has Mount Vernon District been left behind? Why does our district have the most antiquated-looking road system in the entire county?”

Gandee agreed with the Democrats, that she’s not for “waiting another 10, 20 or 40 years to get us the transportation infrastructure needed for economic development.”

On the topic of bus rapid transit, she added, “It makes more sense to add the bus lanes now and take advantage of the growth of Fort Belvoir to expand economic development for our Mount Vernon business community. We should be planning for hotels, restaurants, tech business and all the support services needed by Fort Belvoir. It makes no sense to me to start construction of Bus Rapid Transit lanes at the Beltway and work south when road construction is happening now in the southern part of Richmond Highway.”

Future action being taken at the county level, Hyland said, is a 14-person transportation task force focused on Route 1 set to meet in August. The task force is made up of citizens, planning commissioners, a representative from the Southeast Fairfax Development Corporation, among others.

“Then the board would have something to base a decision on,” Hyland said.

A summary of the of the Route 1 Multimodal Study is available online at www.drpt.virginia.gov/media/1556/route-1-executive-brief-february-2015.pdf.