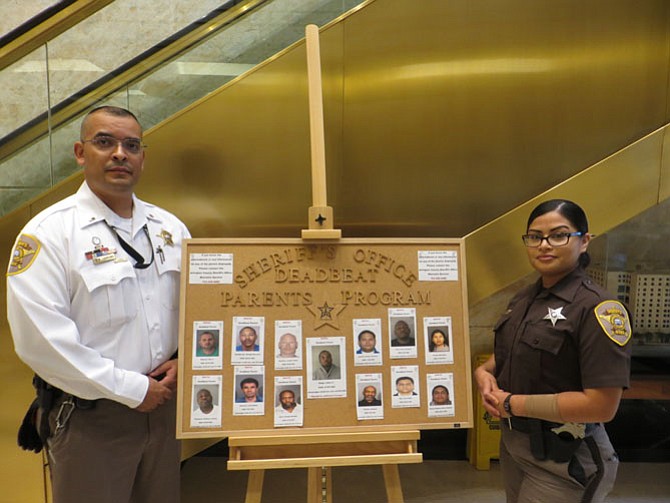 Lt. Richard Laureano and Deputy Daisy Barbadillo with the Deadbeat Parents board. Photo by Vernon Miles.

You should always pay your child support. But if you live in Arlington, you might want to take special care that the check in the mail makes it out on time. If you’ve been ignoring the court warnings about falling behind on payments, there’s a good chance your face could be on the Arlington Sheriff’s Office’s “Deadbeat Parents” wall.

The program, started in 1996, targets enforcement of outstanding court-issued warrants for parents who are delinquent in their child support payments. The Sheriff’s Office distributes “Top 5 Most Wanted Deadbeat Parents” posters and fliers throughout the area.

“We have to investigate and execute a lot of addresses that aren’t valid,” said Barbadillo.

Once the police determine that the parent doesn’t live at the listed address, the police go to social media. The police have several online outlets they use to investigate current whereabouts of the parents in question, but often it can be as easy as checking Facebook.

In cases where it isn’t easy, Barbadillo says their next step is to cross the courtyard to the jail and see if the parents had previously been arrested. If they had, Barbadillo says she checks the visitors and contact lists. Often, though, the “deadbeat parent” comes to them, in one way or another.

Many of the cases are resolved when the parent is arrested for another crime, and it’s discovered that he or she is also delinquent on child support payments. But Barbadillo also says one of the most common cases is that someone either failed to realize they were behind on their payments or underestimates the gravity of violating a court order. Once they’re contacted by the Sheriff’s Office, many parents immediately turn themselves in and pay what they owe, Barbadillo says. Many owe money from years ago and didn’t realize that the overdue payments don’t expire when the child turns 18. This is why, when calling employers searching for the employee, Barbadillo says she’ll never tell them why she’s looking for the individual. If the parent is holding down a steady job, Barbadillo says she wouldn’t want to compromise that in an attempt to extract the due payment.

According to Lt. Richard Laureano, parents who can’t make the payment because of job loss or other circumstances can petition a judge for a reduction in payments.

“We’re enforcers of the law,” said Laureano, “the court establishes the restitution.”

There’s no equivalent program in the rest of Northern Virginia as aggressively pursuing “deadbeat parents.” Barbadillo says budget cuts at many departments have been a major reason. But Major Susie Doyle, director of administration in the Arlington County Sheriff’s Office, said the only funding that goes into the program is the single deputy working as the program’s primary contact. Additionally, Doyle noted that there is no overtime for the Deadbeat Parents program, it’s in addition to her regular work as a Sheriff’s Deputy.

“It’s all on her dedication and her initiative,” said Doyle. “She does this on her own.”

“I have a child, I know it’s expensive,” said Barbadillo. “It’s not fair for one parent to have to handle that on their own.”