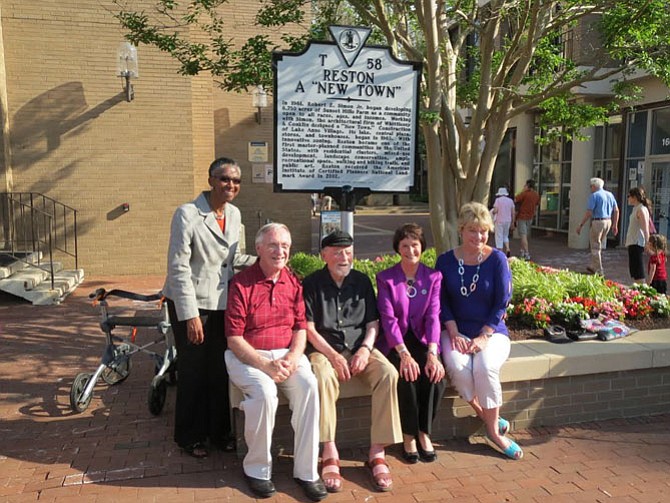 Robert E. Simon has a new place to sit in his “new town.”

Last Friday, May 29, Simon sat with Board of Supervisor Cathy Hudgins, Del. Ken Plum, Fairfax County Chairman Sharon Bulova and Va. Sen. Janet Howell underneath a historical marker that will remind everyone that Reston was one of the first master-planned communities in the United States.

The marker tells readers that “the architectural firm of Whittlesey & Conklin designed a ‘New Town,’” and in 1963 construction began on Lake Anne Village.

The dedication and unveiling ceremony for the marker took place at the sign’s location at the entrance to the Plaza at Lake Anne in Reston.

The “Reston—A ‘New Town’” marker was sponsored by the Reston Historic Trust, which, along with the Lake Anne Condominium Association, covered the cost of the sign’s manufacture. The marker was approved by the Department of Historic Resources in March 2014.