A Bountiful Harvest in Springfield
Votes

A Bountiful Harvest in Springfield

An unusual sight awaits those who venture into the front yard garden of Springfield resident Sandy Kester. Rather than viewing patches of soil, visitors can instead marvel at straw bale formations, each growing plants and vegetables from their tops. 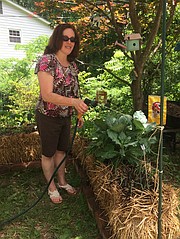 Springfield resident Sandy Kester waters her straw-based garden. The straw bales absorb the water in large amounts, nourishing the plants within them. Kester places small amounts of soil on top of bales as well to prevent seeds from crumbling away from the bale or blowing away.

Kester said she began this garden practice after learning of its efficiency online and purchasing the book “Straw Bale Gardens” by Joel Karsten.

“It’s a crazy idea that this man stumbled upon and anyone can do it, you just need a small amount of space,” Kester said. “This lady at my church has three bales out on her balcony, where she otherwise wouldn’t be able to grow anything outside of small pots.”

Kester said she began growing her seeds and plants from straw bales last year, after acquiring three bales for free over Craigslist. She said, after a brief set-up process, the straw bales require little to no maintenance, compared to a regular soil garden. This is because the porous straw absorbs water at a comparatively higher rate.

“You have to condition your bales for about two weeks with regular lawn fertilizer, with half a cup of fertilizer on top of the bales every day with water to push it down into the bales,” Kester said. “Similar to compost, it gets hot inside due to decomposition. Because the plants are getting their heat from below instead of from above, I could start planting as early as March, which is crazy for this area.”

Kester said straw bale gardening is a versatile process, in that fertilizer can be substituted for substances like apple juice and bone meal during the conditioning process. She also said bales can be reused over multiple summers, and even used for compost after a certain point.

“You’re using and reusing everything that you have, and it’s all ecological and economical,” Kester said. “This year, we paid like

Kester said her friends are used to seeing her experiment with her garden, which has been a hobby of hers for years, one she plans to continue for the foreseeable future.

“I grew up with a mother who did everything from a box, and I didn’t want to be that way,” Kester said. “When my husband and I got married, he said ‘Hey, you don’t eat very many fresh things,’ and I said, ‘Hey, you’re right, I don’t,’ so I started gardening from a container soon after. My friends’ typical reaction is ‘What else will Sandy try?’ I’m kind of like that. I love to try all new things.”