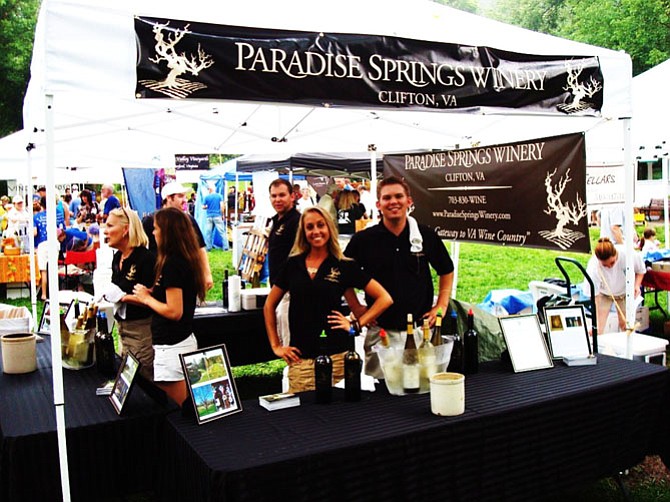 With 15 participating wineries, tasting some from each at the eighth annual Clifton Wine Festival sounds overwhelming. One of the festival organizers, Holly Turner of Burke, doesn’t think making the rounds will be a problem.

“On a beautiful day, if you start early, absolutely,” she said.

This year’s festival in the historic town will feature five different wineries in addition to 10 others returning, according to Turner. There are also at least three to four new arts and crafts vendors, though applications are still being accepted prior to the festival’s June 20 date.

The festival is being presented by Trattoria Villagio, an Italian restaurant in the heart of the town. With Villagio coordinating, Turner said, there should be much more “community involvement. That’s our big theme: We don’t have regulars, we have neighbors.”

One of the neighbors is Lucinda Lawson, a resident and owner of the Clifton Wine Shop for close to three years. Lawson said her shop and others in the town will remain open during the festival, happy to welcome the additional visitors.

“It’s great, it brings new people into the town and they fall in love with the concept,” she said. “It’s just welcoming, a respite, a throwback to a simpler time that people haven’t experienced in a while.”

From a wine perspective, Lawson thinks the festival continues to be good for both the public and the wineries involved.

For lifelong Clifton resident and owner of Clifton’s own Paradise Springs Winery Kirk Wiles, the festival is a chance to support the town, promote some of new offerings and network with the other wineries.

“It’s always fun to come together and share wines with each other, trade bottles at the end of the day, try each other’s wine and see what everyone’s doing,” he said.

Averaging 5,000 visitors each year, Turner said the festival is a strong way for smaller wineries to gain exposure in the market.

This year’s vendors are coming from a variety of locations, from Stafford (Potomac Point Winery) and Purcellville (Notaviva Vineyards) to Culpepper (Old House Vineyards) and Delaplane (Three Fox Vineyards).

“We’re right there in the backyard,” said Wiles. “We want everyone to be proud of what we’re doing, to share in the Virginia craft-produced product and wine industry.”

The eighth annual Clifton Wine Festival is scheduled to take place June 20 from 11 a.m. to 6 p.m. at the Children’s Park, located at 7150 Main Street, in Clifton. For more information, visit www.cliftonwine.com.