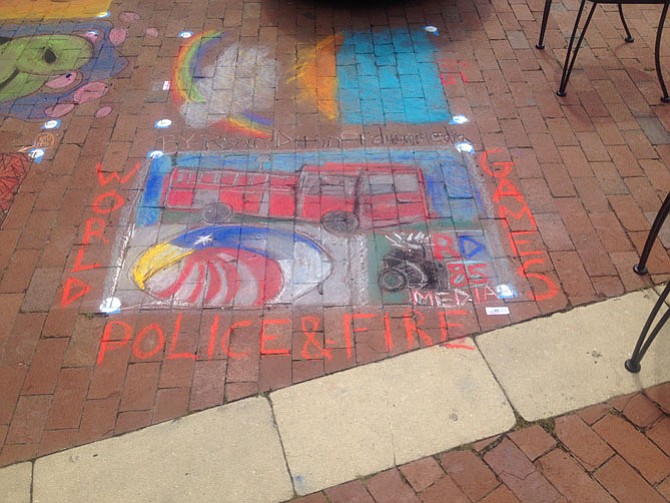 On June 13-14 Reston Lake Anne Plaza hosted its 2nd annual Lake Anne Chalk on the Water Festival. There were three categories to participate in, each with cash and other prizes awarded. More than 100 chalk artists participated in this event. Photo by Ryan Dunn.

This past weekend Reston Lake Anne Plaza hosted its second annual Lake Anne Chalk on the Water Festival. There were three categories for persons to participate in, each with cash and other prizes awarded. More than 100 chalk artists participated in this event. Participants had two days to complete their work. Despite heat and humidity, people of many ages took the opportunity to draw chalk art. “The hardest part was keeping my sweat from dripping on it while I was drawing,” said artist Ioannis Hadjikyriakou. 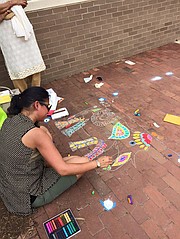 Artists of all ages participated in the second annual Lake Anne Chalk on the Water Festival at Reston Lake Anne Plaza.

Lake Anne collaborated with Initiative for Public Art-Reston (IPAR) to bring this public art themed event to the plaza. IPAR imagines public art throughout Reston that inspires the community and engages the mind and senses. Funds raised from the festival were donated to IPAR. Participants could purchase a “plot” of brick space on the plaza and create whatever flows from their imagination. Approximately 100 spaces/plots were available for this event. Reston Town Center will host a ChalkFest on Friday and Saturday, Sept. 11-12.

Sunday, June 14 was also the first date of the return of the Summer Film Festival, a free outdoor cinema festival which begins at sundown near the Lake Anne Plaza. The schedule for July 12 is Spielberg’s “E.T.”, Aug. 9 the musical “West Side Story,” and Aug. 30 the documentary film Jazz on a Summer’s Day. The shows begin at dusk, close to 8:30 p.m.

Argentinean-born Claudia Samper holds a degree in architecture from the University of Buenos Aires. After moving to the United States, Claudia studied graphic design, photography, ceramics and painting. She describes herself as an “empathetic” person and looks to relationships and “the psychology of life itself” for artistic inspiration.

Claudia has exhibited around the country, and her paintings are part of collections in Argentina and Spain. Currently, Claudia has a solo show at the Reston Art Gallery titled “Interplay,” which features pieces that explore the world of opposites and dreams, a rearrangement of different visual or intuitive elements. This show lasts from June 4 to July 2.