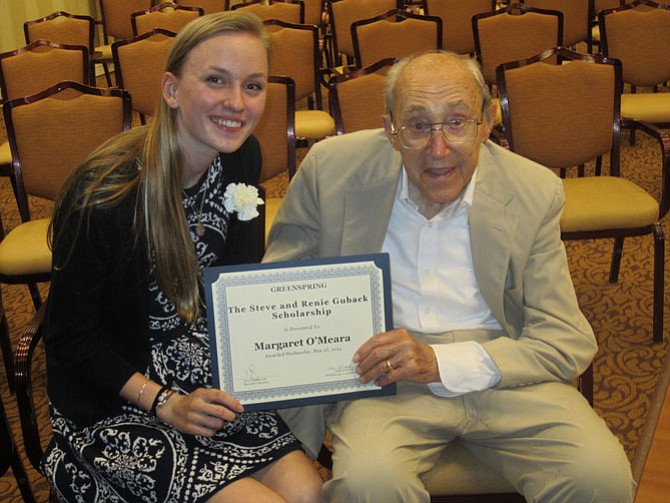 West Potomac High School senior, Margaret O’Meara, received The Steve and Renie Guback Scholarship of $5,000, which is awarded annually to a student focusing on a major or minor in communications including, but not limited to, the fields of journalism, broadcasting, and public relations. Recipients of the scholarship are required to perform 150 hours of volunteer service at Greenspring’s Channel 6 television studio, learning a variety of skills. Margaret will begin the internship this summer and will major in Communication Studies at Virginia Tech in the fall.

The Steve and Renie Guback Scholarship is one of Greenspring’s donor-designated endowed scholarships. The award was presented to Margaret by Steve Guback on Wednesday, May 27, at Greenspring’s annual Scholars Awards Ceremony. More than 300 attendees, including friends, family, community donors and local school officials, attended the ceremony.

Steve Guback is an award-winning sportswriter with the Winston-Salem (N.C.) Journal, the Richmond (Va.) Times-Dispatch and the Washington (D.C.) Evening Star where for 20 years he covered all sports, but chiefly the Washington Redskins and NCAA basketball. A graduate of Indiana University, he was elected to the U.S. Basketball Writers Hall of Fame, the Virginia Sports Hall of Fame and the Norwalk (Ct.) High School Wall of Honor. He became a resident of Greenspring in 2009 where he produces Talking Sports and Armchair Traveler programs for Channel 6 (TV studio). He sponsors three scholarships at Indiana University in addition to this one at Greenspring.

Renie Guback was a native of Stateville (N.C.) and came to the Washington, D.C. area in 1951. She worked for the FBI and served as the personal secretary for U.S. Rep. James Harvey (R-Mich.) and U.S. Rep. Guy Vander Jagt (R-Mich.) for 25 years. Upon her retirement from Capitol Hill in 1985, she became a long-time secretary at Aldersgate United Methodist Church in Alexandria. She married Steve Guback in 1964. Together they enjoyed volunteer work, church activities and traveled the world together over the years. She died on March 6, 2009. Prior to her death, they funded the construction of a multi-purpose activities room at Aldersgate.