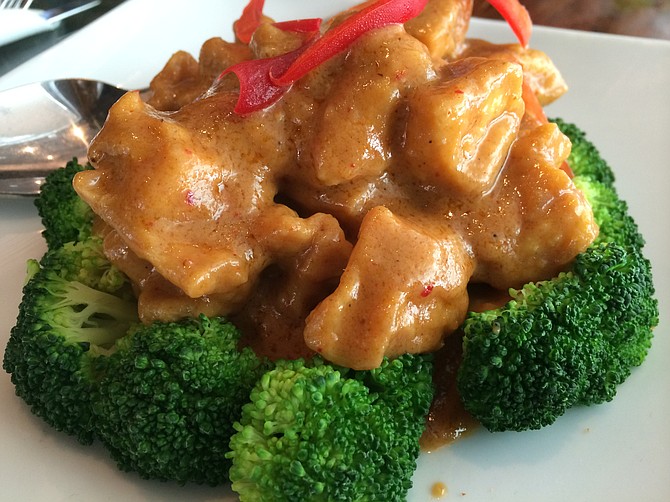 For years, the Carlyle community has been more than a nine-to-five business district. While condos and apartments have been full for more than half a decade, the restaurant population has been slow to catch up. In a neighborhood that was once dominated primarily by sandwich shops and other lunchtime eateries, some more substantial dining spots have emerged, and they’re certainly worth a visit.

Tucked away off the main artery of Dulany Street, situated on the corner of Englehardt Lane, Pasara has been in the neighborhood for nearly a decade. The restaurant, which now sports four locations, was launched 15 years ago in Kingstowne (where the original location still operates) by Pasara Kongubol, who continues to be a major player in the restaurant.

She loves to cook and wanted to share her passion with other people,” said her daughter, co-owner Tulip Kongubol. Now Pasara Kongubol spends her days as the “quality control” agent for the restaurant, ensuring each dish emerges from the kitchen at a high caliber.

Visit the restaurant on nearly any weekday and you’ll find a packed house bustling with activity; while the evenings are quieter, you and your dining companions will certainly not be alone in the building. And at both lunch and dinner, you’ll find a steady stream of diners coming and going from the bar area — not just to order drinks, but to pick up their call-in orders as well.

Pasara excels in bringing Thai cuisine’s complex flavors to your table. Whereas some Thai restaurants’ offerings can be rather one-note, the flavors coming out of Pasara’s kitchen are rich and complex. Take their rama chicken and rama jae (tofu) entrées, for instance. The deep, rich flavor of the peanut curry sauce brings forth a nutty note, certainly, but also a spicy undertone that adds just a hint of kick to the dish.

“Nowadays, people love spicy food,” she said, noting that the majority of her customers now request their meals on the hotter side, whereas even a decade ago the orders came into the kitchen much milder. Further, more customers are requesting one of the restaurant’s traditional spice trays to accompany their meals — whereas several years ago the restaurant, made do with five such trays, now it keeps 15 on hand for customer orders.

Of course, any Thai restaurant worth its curry has to bring a decent pad Thai to the table, and Pasara sails over this benchmark as well. The noodles are smooth, the sauce is silky, and the vegetables and proteins are abundant throughout the dish. The result is a customer favorite, Tulip Kongubol says.

“We use fresh tamarind sauce,” which puts the dish over the top, she added.

Given its location on the first floor of an office building, it would be easy to write off Pasara as a workday quick-lunch spot and not much else. But to do so would be an error; no matter the time nor the day, Pasara has grown into a Carlyle mainstay, and for good reason. And Tulip Kongubol says she’s happy that Pasara has grown up with the community.

“Come by to try our authentic Thai food,” she says.

Pasara certainly isn’t the only game in town. Other notable eateries worth your time and hard-earned dollars include:

Hope Nelson also writes for and operates The Kitchen Recessionista blog, which can be found at www.kitchenrecessionista.com.