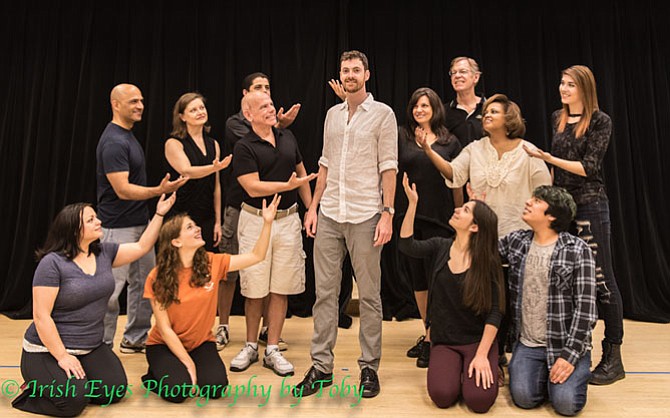 Jesus (Brian Hill) and Judas (Shaun Moe) expressing his concern about the beliefs of Jesus's followers.

“Jesus Christ Superstar” is a rock opera with music by Andrew Lloyd Webber and lyrics by Tim Rice. It was first staged on Broadway in 1971. Webber received a 1972 Tony Award for Most Promising Composer. The musical, freely based on the Gospels, is often seen through the eyes of Judas Iscariot. It highlights social unrest while focusing on the differences between Jesus and Judas.

For director Kevin McCormack, who co-directs with Pam McCormack, there is a special excitement to helming the musical. “It has been exactly 30 years since we first put this show together in Carson, California. Like that first production, we have an excellent cast, staff, design team and musicians all working very hard to help us create a story both new and familiar, current and timeless”.

“We enjoy what the show stands for. It sometimes questions standard beliefs but is respectful of them.”

The McCormacks are giving a contemporary flair to the production. Through open auditions, they cast many talented, younger singers new to the McLean theater scene who are taking on a 24-number pop-rock score including the widely-known, “I Don’t Know How to Love Him.” A nine-piece band will be under the direction of John Edward Niles with vocal coaching by Lori Roddy. Costumes will have a modern, urban sensibility from MCP veteran Richard (Bat) Battistelli.

“With an evocative set, we will be using high intensity lighting, not unlike a rock concert,” said Kevin McCormack. “We plan to use every light we can and throw every switch” created by long-time set designers Bill Glikbarg, who has been involved with over 60 productions with the MCP developed and Lynne Glikbarg lighting designer.

Asked to describe the production, Moe noted that it is about “power struggles in a community against the elite; not unlike Occupy Wall Street.” For Hill, “Jesus Christ Superstar” depicts a time when “everything was changing in a society with so much to explore.”