School Board approves recommendations from advisers, with amendments. 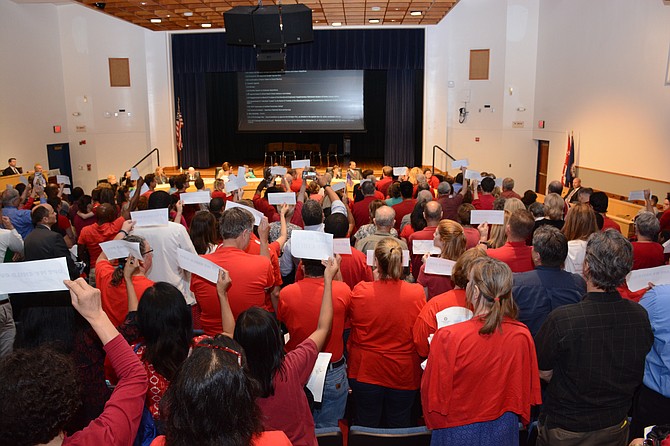 Parents wearing “Respect Parents’ Rights” and waving signs that read “Opt Out My Child” stand during citizen participation at the June 25 school board meeting. Photo by Tim Peterson.

Student Bennett Shoop addresses the Fairfax School Board at its June 25 meeting in support of the Family Life Education proposed changes, saying, “Knowledge can become acceptance too.”

Though it was the second packed house in as many months, it may be early yet to call crowded Fairfax County School Board meetings a trend. On May 7, parents, community members and a handful of students came out to Luther Jackson Middle School in Merrifield as the board approved adding “gender identity” to the school system’s nondiscrimination policy. No one disputed the need for protection from bullying or fostering a positive, healthy and safe learning environment for all. But many who spoke that night were critical of the process. There was confusion as to what the effects of the policy change would be, and anger that engagement with the public ahead of time was lacking.

Groups both for and against proposed changes to health and Family Life Education curricula took turns standing and cheering while their viewpoint was represented during citizen participation at the school board meeting.

The committee briefed School Board members on its initial proposed changes at a work session on May 11; the recommendations came up as business at the board’s May 21 meeting with June 25 scheduled as the voting date.

Between May 21 and June 19, the recommendations were put online for community review. During that period, the School Board reports, staff received 561 emails, plus a petition signed by 116. It amounted to 225 pages of citizen comments, all of which can be viewed and read through the School Board’s agenda notes for the June 25 meeting.

Among the breakdown of responses (also posted in the June 25 agenda notes) 435 were opposed to “inclusion of transgender instruction and references to gender-fluidity,” while 54 supported “inclusion of sexual orientation and gender identity instruction.”

The petition called for the board to:

Either with phones or tripods, many individuals recorded the June 25 school board meeting.

In response to the comments and prior to the June 25 meeting, several changes were made to the recommendations, including:

But for the majority of citizens in attendance at the June 25 meeting, clad in red for solidarity, that wasn’t enough. Speakers before the board claimed many of the curriculum items coming out of Family Life Education and into health were not actually required as part of the state standards of learning. And the prospect of losing the opportunity to opt their children out of material not required by the state was infuriating for some.

“This vote is not about bullying or hatred,” said Laura Hanford. “The real point is process … that culminated in outright deceit.”

After the initial motion from board member Sandra Evans to approve the curriculum advisory committee’s recommendations, members Patricia Reed and Elizabeth Schultz attempted a motion to postpone the vote until July. They cited a steady stream of clarifying information coming in from county staff answering numerous questions from the board, as well as the feedback from community members.

“To rush is not good public policy,” said Reed, who added she was “receiving material as late as today.”

Schultz questioned who gave the advisory committee its direction and was critical that none of the board members had served as a liaison.

Their motion to postpone was voted down 10-2, which drew an outburst of cat-calls and derogatory comments from the audience.

Next board member Patricia Hynes introduced an amendment that appeared to be a compromise. It would direct Superintendent Dr. Karen Garza to “retain in Family Life Education any objectives that are not required by the 2015 VDOE Health Standards of Learning.”

Schultz then offered a sub-motion: directing Garza and her team to further review the recommendations and how they align with state standards. This would also defer consideration of the changes for implementation in the 2016-2017 school year. Schultz again commented that the board’s preparation for the vote was lacking.

Schultz’s sub-motion was defeated. Then board vice chairman Ted Velkoff offered an amendment to Hynes’ original amendment that enumerated the 15 items originally from Family Life Education that would be returned. This would “make sure parents have the opportunity to opt out,” Velkoff said. Twelve were not required by the state to be in the health standards and three were in response to the petition.

According to agenda posted by Fairfax County Public Schools, those curriculum items that were part of Family Life Education, had been recommended to move to health and would be moved back under Velkoff and Hynes’ amendments are as follows (the K or number refers to grade level):

* K.1 Student will recognize that everyone is a member of a family and identify members of their individual families

* K.2 Students will identify positive ways in which family members and friends show love, affection, respect, and appreciation for each other.

* 1.1 Students will describe a community as people living and working together and will understand that family members make up a community.

* 4.3 Students will identify the need to assume greater responsibility for self as an individual, as well as responsibility within family, peer groups, and larger community.

* 4.7 Students will recognize the values and challenges of friendship.

* 5.2 The student will identify roles, duties, and responsibilities of family members

* 7.2 The student will explore changes in peer relationships during adolescence.

* 7.3 The student will describe how adolescent development affects family relationships and practice effective strategies for communicating with family members.

* 8.2 The student will practice applying the decision-making process to situations related to adolescent development.

* 8.7 The student will identify family and personal expectations of dating relationships and investigate the influence of mass media messages on dating and sexual behavior.

* 8.8 The student will demonstrate strategies for resolving conflicts that arise in families and peer groups.

* 9.1 The student will identify the family as a basic unit of society and his or her responsibility as a member of the family.

* 10.9 Student will describe his or her attitudes toward dating while examining values, morals, and ethics essential to positive dating relationships.

Those two amendments passed, after which Schultz made one final attempt to stay the vote by tabling the discussion. After that was voted down, the board voted 10-2 in favor of the recommended changes with Reed and Schultz as the dissenting votes.

Where the May 7 vote drew lengthy and numerous comments from the majority of the board members, the group was largely quiet aside from the champions of the motions and amendments.

“It is important to note that all [Family Life Education] designated lessons will continue to have the opt out provision,” School Board chairman Tammy Derenak-Kaufax said in a statement after the meeting. “Our parents’ role in determining if their child will receive [Family Life Education] lessons has not changed. We respect parents’ rights to make the choices they believe are in the best interest of their families.”