Michael Bohn applies his first-hand experience in the White House. 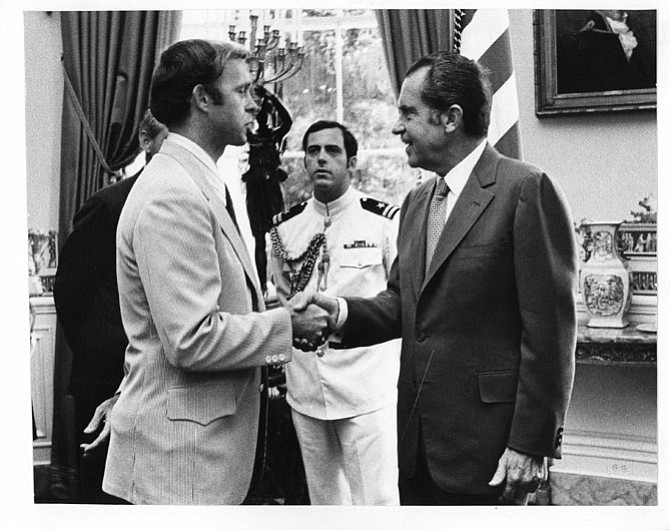 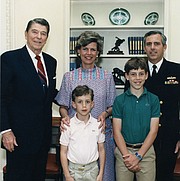 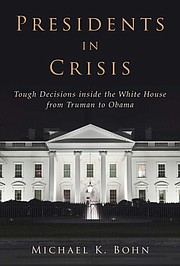 The first time Mount Vernon author Michael K. Bohn put his pen to paper, it wasn’t to draft one of his six books. It was not even to write an article for one of the many national newspapers that has published his byline. Bohn’s writing career began in 1998, with a human interest piece for the Mount Vernon Gazette. Last week, Bohn celebrated the release of his sixth book, “Presidents in Crisis: Tough Decisions inside the White House from Truman to Obama.”

The idea for “Presidents in Crisis” arose from features Bohn wrote for McClatchy Newspapers about two major historical events the White House confronted — the 1962 Cuban Missile Crisis and the Sept. 11, 2001 terrorist attacks.

"The book came from articles I had written for McClatchy newspapers," Bohn said. "I did a big, long piece for them on the Cuban Missile Crisis, and then I wrote one for the 10-year anniversary of 9/11. The stories were 3,000 word features, and I thought, 'why don't I write about a number of crises and see what lessons there are?'"

Bohn has written books about sports, history and politics — with varied yet specific subjects including how golfers gamble on the green to a look inside the White House Situation Room. He said he has been able to leverage connections and insight gained from his 20-year military career in Naval Intelligence to write about such historical and political subjects.

For a non-fiction book to be compelling, Bohn said there has to be an argument. For his most recent book, he took 12 different presidents in times of turmoil and used evidence to conclude that a president can never satisfy the public when effectively addressing an international issue.

From Truman’s handling of the Korean War to Obama’s approach toward chemical weapons in Syria, Bohn demonstrated that the public has never and will never seem to approve.

“The book is topical because with Ukraine, ISIS, Ebola, nuclear weapons, you name it — it is a crisis today,” Bohn said. “The people on the sidelines barking at President Obama have no idea how hard it is. They have never been in that situation. They have no skin in the game, so if their ideas are dumb, they don’t pay the consequences.”

Having directly served the president twice as a naval intelligence officer, Bohn has sat in the White House Situation room. Most people will never have a front row seat to the Executive Branch’s decision-making process, so Bohn gets readers as close as possible.

While Bohn wrote for his military positions, he said he had never crafted any kind of story or narrative from beginning to end until his first local feature.

“I was a career naval officer, but I wanted to learn how to write,” Bohn said. “I wrote a daily summary of world events for the President, but that didn’t count.”

Bohn said it is important for aspiring writers to remember that he didn’t begin his writing career with an award-winning book. It has taken him years to get where he is now, and he has enjoyed every step of the process.

“My friend was a White House Correspondent, and he said I should write for local papers,” Bohn said. “That’s when I went to The Gazette, where another friend of mine, Marlene Miller, was the editor. My first article led to a series of about 20 articles. I interviewed people, did education profiles, and every time I finished a story, I wanted to do it again. I always wanted to do more.”

Bohn’s love of writing and the feedback his articles yielded led to his first book idea. He sent two sample chapters to a publisher, and soon, his first book was underway, “Nerve Center, Inside the White House Situation Room,” in 2003. This was one of many times Bohn was able to draw upon his insider knowledge of the White House.

“I came up with a scheme and it was very successful,” Bohn said. “I was able to interview a lot of people because of the position I once had.”

Sports and political histories, as well more articles for national newspapers followed. Soon after his first book, his publisher was asking for Bohn for his next idea.

“So I wrote a book about terrorism and the hijacking [of the Italian cruise ship] Achille Lauro in 1985,” Bohn said. “I had been stationed at the White House when it happened, so I had a lot of insight.”

The next two books that followed were sports related. His 2007 “Money Golf, 600 Years of Bettin’ on Birdies,” was named one of the best seven golf books by Golf Digest that year. The idea for this one was born from a conversation Bohn had with a few buddies over a few beers at his golf club.

Bohn is living proof that the age old advice, “write what you know,” works. He has more words of wisdom for budding writers, as well.

Secondly, he said, before you start dreaming of your name on a book cover, you should seek out instruction that is available. Training that he sought in his early years of writing continues to pay off.

“Take advantage of other peoples’ knowledge,” he said. “The best thing I ever did was attending a workshop with The Washington Post. I learned how to write narrative non-fiction, going from one scene to the next. In the new book, I looked at 17 crises in the White House and take you in the oval office and let you listen to people argue about what they need to do.”

He said that while you don’t need to shell out thousands of dollars on a graduate program, it is important to respect your craft.

“You don’t have to go to grad school, but if you are serious about a writing or journalism career, then learn how to do it,” Bohn said.

“Start writing for your local newspaper,” he said. “Write clippings. Don’t start with a book. And, do not write a book before you sell it, because you may be wasting your time. You have to understand what sells and what readers what to buy.”

Bohn’s success is also evidence that it is never too late to realize a dream of becoming a writer. He not only served in the military for 20 years, but also had a civilian career as a defense contractor before seeing his first byline.

“After leaving the service, I worked for Booz Allen as a defense contractor and then started my own residential remodeling company,” Bohn said. “I gave myself time to learn to write. I wrote simultaneously with working. I closed my company in 2001 when I got a contract for my first book. I have been writing full time since then.”

“Presidents in Crisis” marked Bohn’s first time producing with a New York agent and publisher. His agent, Julia Lord, said she was thrilled to work with him and that everyone on her team is proud of the result.

"It is a big period of time and was a huge amount of analysis," Lord said. "People in government should be reading this because they can learn a lot about decision making. This is why he is getting such good press already."

There is no way the comprehensive book could have been an easy subject for anyone to tackle. Still, Bohn successfully connected all the dots, Lord said.

"Mike is thoughtful and receptive, and adjusted his proposal to a slightly more accessible tone before we went out with it," Lord said. "He’s the consummate professional writer, and we all have truly enjoyed working with him on this."

In additiont to Lord, Bohn has a film and television agent in Los Angeles who is currently working on selling “Presidents in Crisis” as a TV series.

These days, Bohn spends his time writing features for the Chicago Tribune Wire Service while he promotes “Presidents in Crisis.” He said he has a few other book ideas swimming around his yet, but he hasn’t committed to anything quite yet.

No matter how much success he sees, Bohn said seeing his name in print never gets old.

“It’s very impressive,” he said. “It is a very big deal for to see my byline in the Washington Post, Kansas City Star, and now, Los Angeles Times. There is no money in this. But at this point in my life, it is perfect because I get to interview my heroes. I can get just about anyone on the phone.”

The Texas native crafts his works in his home office or local clubs where he holds memberships. He and his wife, Elin, live in Mount Vernon and raised their children in the area.

He has lived all over the world, but will always have a soft spot for the Capital Region.

“It all started in 1995 with the Mount Vernon Gazette,” Bohn said.