Students From Around Fairfax County Recognized for Promoting Peace
Votes

Students From Around Fairfax County Recognized for Promoting Peace 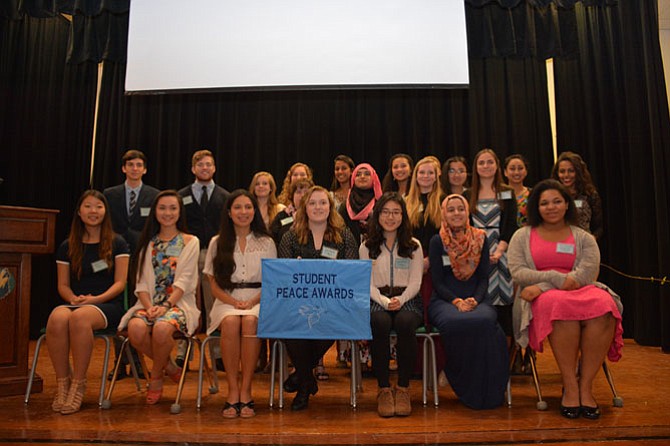 Student leaders and promoters of nonviolence were recognized March 15 at the Student Peace Awards of Fairfax County, held at Mountain View Alternative High School in Centreville. Photo by Tim Peterson. 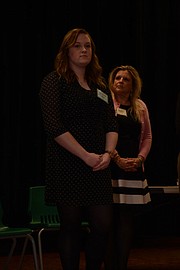 After a friend of South County High School senior Sakira Coleman was sexually assaulted while running on a local public path, Coleman decided to take action and started the “Fight for Your Right to Run at Night” program.

“I don’t like feeling helpless,” Coleman said. “This is about raising awareness.”

The senior has also served as president of the school service club “Stallions Lend a Hand” and volunteered at Greenspring Retirement Community, a workload that in addition to actual schoolwork requires “no sleep ever” to maintain.

Coleman and 22 other peace-promoting students and student organizations were recognized March 15 at the Student Peace Awards of Fairfax County, held at Mountain View Alternative High School in Centreville. From anti-bullying event organizers to student association presidents and volunteers in the community, the student leaders were chosen for exhibiting high moral and civic values.

“The number of ways to peace is limited only by the human imagination,” said Dr. Margaret Fisher with the Peace Awards coalition as she opened the program. “Seemingly endless suffering in the world can give way when we join our strengths together.”

The peace awards started in 2006 with one high school and faith-based sponsorship. The event has grown such that now each public high school and three private schools in Fairfax County may select students for the awards and there are 14 faith-based and secular sponsors.

This year schools were also able to select organizations to honor, including: the Anti-Bullying Committee of Cedar Lane School in Vienna, the Dare to Care anti-bullying group of Hayfield Secondary School in Alexandria and The Peer Mediation Program of J.E.B. Stuart High School in Falls Church.

As students were called to the stage in the Mountain View auditorium, they received a copy of Mark Andreas’ book “‘Sweet Fruits from a Bitter Tree.” Along with a monetary award, each student also chose a charitable organization to which $100 would be donated in their name.

“When I looked at what these students have done,” said Shoap, “I was humbled and lifted. There is hope for the future.”

Shoap referenced the nonviolence and civil disobedience that characterized the work of the Rev. Dr. Martin Luther King, Jr, commenting that “We’re all fighting for human rights.

“We’re change agents,” she continued. “It’s hard to talk about things that are difficult in their communities.” But, Shoap said, “You’re connected to a growing global community of peacemakers.”

Though mostly upperclassmen were recognized with peace awards, Seungmin Lee of Rocky Run Middle School represented the next wave of peacemakers. His artwork was featured on the back of the event’s program and won first place in the Fairfax Lions Club 2014 Peace Poster Contest.

Lee used colored pencils to depict a red, white and blue dove flying over a globe and a peace sign, with hands of various skin tones reaching towards it.

“It’s about people sharing, understanding each other, that peace is beautiful,” said Lee.

Sakira Coleman commented that although the students receiving awards have done a lot for promoting peace and reducing violence, “There’s always more to do. It’s nice to see we’ve already started.”