22 students or student groups receive the Student Peace Award, for their efforts to promote peace. 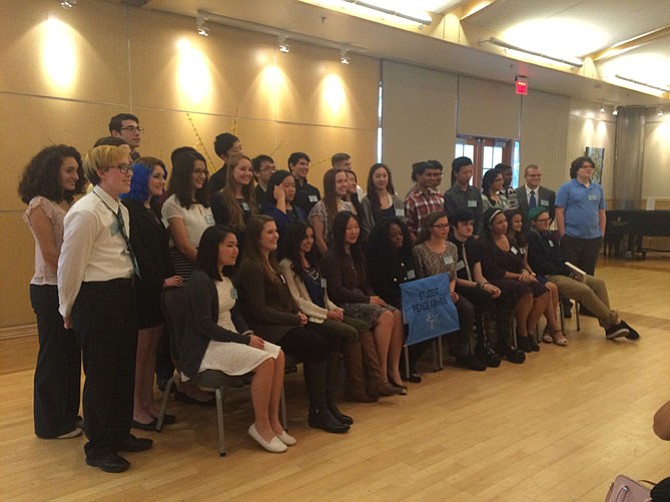 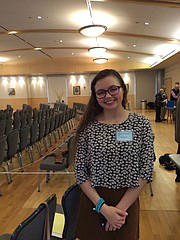 What Did You Do to Win Peace Award; What Inspired You to Get Involved?

With causes ranging from anti-bullying efforts to human trafficking awareness to interfaith dialogue, students in Fairfax County were recognized for their peacemaking efforts at the 11th Annual Student Peace Awards of Fairfax County on March 13.

"As one of their counselors said, these are people who not only looked for opportunities to do good things, they went out and created the opportunities. So many, many of these students have gone and created their own organizations and their own clubs to help whatever the issue is they wanted to work on," organizer Margaret Fisher said.

Mason Professor Al Fuertes, who travels to areas affected by war and natural disaster, spoke at the ceremony. Fuertes congratulated the recipients and spoke about his personal and professional experiences with fostering peace. Students received awards for a variety of peacemaking activities, however.

"As long as a student's contribution is something for peacemaking or nonviolent resolution of conflict, the schools could decide for themselves what that meant, because we didn't want to limit their thinking, and there's just millions of ways you can make peace either in your life, or in your school, or the greater community or the world as a whole," Fisher said.

EACH HIGH SCHOOL is responsible for selecting students to receive the recognition. Club leaders or counselors make recommendations and some schools allow students to self-select. Recipients of the award were informed in December so that they could include the recognition on college applications.

Because the awards are given to high school juniors and seniors, the Student Peace Awards program aims to give students another achievement to strive for, in addition to academics and athletics.

"What we want to do is find a way to promote peace, that's the only goal of this is to promote peace. We thought that encouraging young people to find projects that do that would be worth doing and we wanted to get the word peace into the conversation in schools," Fisher said.

In addition to rewarding good student behavior, The Awards also aim to promote nonviolent solutions within the community, which in turn can spread globally, according to planner Paul Murphy.

"We need to reward positive behaviors. And to get people thinking in problem solving modes, not just whenever there's a problem in the world, to think that it requires a military solution, but beginning with our communities, expanding nationwide and then internationally." Murphy said. "I think it's very important for people to see that there are alternatives to violence, and these kids are beginning to show it at a very young age and we want to encourage them."

"I think it's very important for people to see that there are alternatives to violence, and these kids are beginning to show it at a very young age and we want to encourage them."

Once nominated for the award, recipients were guided through the process by representatives. Nancy James, who has served as a representative for several years, said she was assigned to work with senior Laith Abuhaija of the Islamic Saudi Academy, who was recognized for his interfaith efforts and volunteer work. Representatives wrote biographies which were read while students received their awards.

As the award program has grown, so has its importance to families of nominees. Luis Urbina drove from North Carolina to attend the ceremony for his daughter and award recipient, Renata Urbina Dela Flor, a senior at Lake Braddock Secondary School.

"We talked and she mentioned some stuff, but it's good to see that it's a lot more than what she said. You know, she's very humble so it's nice to see something like an award," Urbina said.

RECIPIENTS were awarded $250 as well as $100 to be donated to an organization of their choice. However, according to organizer Nancy Davis, the monetary reward is certainly not the most valuable gift.

"I love to see the families' expressions," Davis said. "The families are just so happy to see their children recognized for this type of work. It's not the athletic field - which is important too - and the monetary gift isn't great but I think it's wonderful seeing the parents so proud."