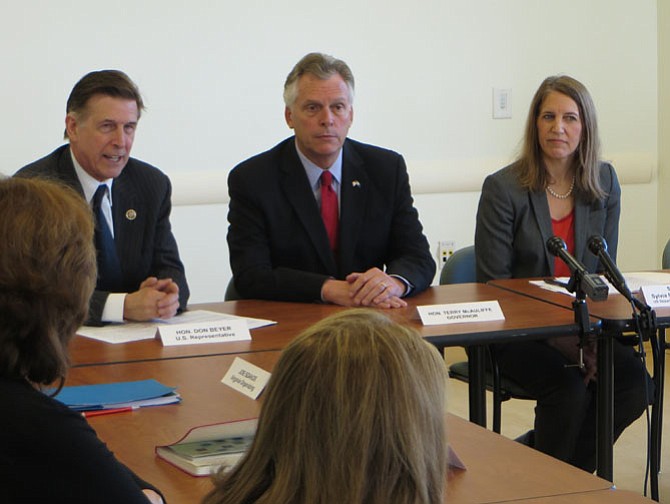 “If Medicaid were expanded, we could take in more patients.”

National and Virginia leadership’s planned celebration of the five-year anniversary of the passage of the Affordable Care Act quickly became a discussion of the program’s outreach failings and concerns following Virginia legislature’s decisions not to expand the program.

Federal and state officials met at the Arlington Mills Community Center on Monday, March 23, for for a round table discussion led by Sylvia Burwell, U.S. Secretary of Health and Human Services, Gov. Terry McAuliffe, and U.S. Rep. Don Beyer (D-8).

Much of the panel’s conversation centered around the Feb. 8 decision in both the state House and Senate budget not to include Medicaid expansion in the 2015 budget, meaning that anyone making less than $11,670 annually will not qualify for subsidies to buy health coverage.

““We’re working very hard to close the coverage gap,” said McAuliffe. “It is the right thing morally, socially, and economically.”

“We have to get through the electoral process where Republicans are afraid of the Tea Party,” said McAuliffe, who added that he’d personally met with some leaders in the Republican state leadership who told him they would normally support healthcare reform but said they can’t afford to appear weak or risk losing their position to a more conservative tea party candidate. “We have to get away from political rhetoric and help Virginia,” he said.

But despite a panel composed of those who universally expressed their approval of the ACA, a Republican response wasn’t far behind the Governor’s statements. Later that day, John Whitbeck, chairman of the Virginia Republican Party, said via email that he and others in his party remain staunchly opposed to Medicaid expansion.

“Democrats said they were going to make healthcare more affordable,” said Whitbeck. “It isn’t. Democrats said health care premiums would be reduced. They aren’t. President Obama said you can keep your doctor and your plan. Well, we know that is no longer accurate. ObamaCare is a burden to families, small business and the middle class who are seeing their taxes being raised. Virginia families and businesses need a patient-centered health care system, not broken promises and bureaucracy.”

In Virginia, 385,154 consumers enrolled or re-enrolled in health insurance through the ACA, but according to the Virginia Health Care Foundation, there are currently 8,000 uninsured adults in Arlington and Alexandria who would be eligible for Medicaid under the ACA expansion. In Arlington, one of the few options to those who are considered too poor for health care is to seek coverage at the Arlington Free Clinic. The clinic currently holds monthly lotteries to gain insurance at the facility. Of the 80 people who show up to each of these events, only one quarter receive access to benefits, said Diane Naughton, executive director of the Arlington Free Clinic. While the majority of their patients would be unaffected directly by expansion of the ACA, the program has indirect effects on their facility.

“With the Affordable Care Act, some patients can transition to private healthcare,” said Naughton. “If Medicaid were expanded, we could take in more patients.”

According to a report from the Center for Disease Control, eight percent of emergency patients have non-urgent medical conditions, but emergency departments are federally mandated to treat anyone who enters their facility. State Sen. Barbara Favola, representing Arlington’s 31st District, said Medicaid expansion could help save money spent on emergency treatment of non-urgent conditions.

“It’s worthwhile to document the savings and efficiencies,” said Favola. “Access to primary care avoids patients going to the emergency room. There are efficiencies built in. I have found that resonates with more constituents.”

This argument was mirrored by Burwell’s announcement at the panel that hospitals nationwide had saved $7.4 billion in costs saved from treating patients who, before the ACA, were uninsured or underinsured. However, in states that did not pass Medicaid expansion, that saving fell to $2.4 billion.

In attendance at McAuliffe’s panel was Nathan Auldridge, a 30-year-old resident of Roanoke who suffered with extreme medical bills following the removal of a cancerous tumor from his brain in 2005. Afterwards, when he left his parents’ plan, Auldridge found himself paying $483 per month for health insurance with a $5,000 deductible. Before the passage of the ACA, Auldridge was paying 55 percent of his income to healthcare costs. Now, he says that cost has come down to a manageable $100 per month.

“I hear stories like Nathan’s all the time,” said Del. Patrick Hope, who represents the 47th district in Arlington. “There are 400,000 people in Virginia without coverage; 5,000 [in Arlington] would receive coverage if we expanded Medicaid.”

One of the major themes of the morning’s discussions was moving from health coverage to care.

“We need to connect people with care,” said Burwell. “We are teaching people to understand their benefits and make sure they take advantage of them.”

Jeffrey DiLisi, M.D., senior vice president and chief medical officer for the Virginia Hospital Center in Arlington, attended the meeting and said he was happy to see the conversation about healthcare focus on more than coverage.

“From a hospital or health systems perspective, we can’t impact access, that’s a political thing that needs to happen,” said DiLisi. “We can only impact the quality, when patients get access to care and high quality institutions.”

Dilisi and Adrian Stanton, vice president and chief marketing officer for the Virginia Hospital Center, praised the higher hospital standards the ACA implements and says the unspoken success of the legislation is the amount of transparency it applies to hospitals, highlighting the Hospital Compare feature at medicare.gov.

“It has created some transparency that didn’t exist before,” said Stanton. “For the majority of the community, they still don’t understand it or see why it’s important, but the larger corporations have started to look at it as key items from a value perspective. It’s also about patient satisfaction and the cost of healthcare, that’s what this reform has brought forward, transparency around those key items.”

According to Neil McNulty, president and CEO of the Virginia Business Coalition on Health, access to hospitals can be a major hurdle to drawing businesses to an area. McNulty described the difficulties of trying to get businesses to start in western Virginia, where hospitals going out of business mean the closest access to health care can be more than 100 miles away. McNulty said many of the businesses he encounter are also reluctant to support the ACA and largely haven’t been reached out to by the state to have the benefits explained.

“The business community isn’t taking the time to understand why this is good,” said McNulty. “It’s not just a social program, it’s a business program.”

Leni Gonzales, an outreach and education specialist with Enroll Virginia, said the immigrant community is similarly having a tough time accessing and understanding the enrollment process. According to a report by the U.S. Department of Health and Human Services, issued Jan. 27, despite representing a third of the nation’s uninsured population, only 10 percent of those who signed up for healthcare with the ACA were Hispanic.

“We have to provide knowledge in their language to the immigrant community,” said Gonzales.

“We will continue with Medicaid expansion, but different states have to do it however they can,” said Burwell. “There’s still a tremendous amount more to do.”