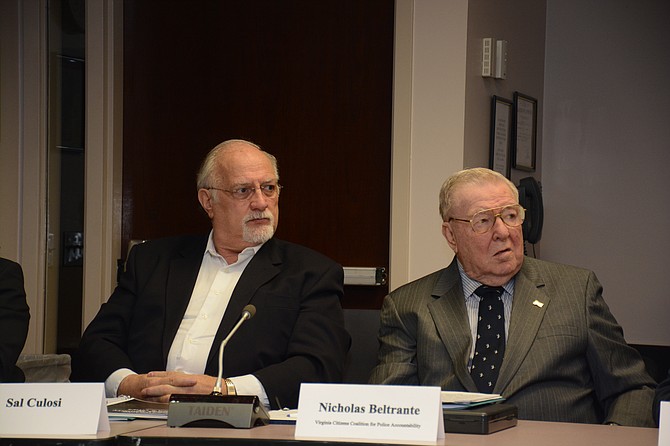 While several other members of the recently created Ad Hoc Police Practices Review Commission stated their general intent to listen and learn and help, Salvatore Culosi had a more specific request.

“My son would still be alive today,” Culosi said, “but for 2006 Fairfax County policies to routinely use SWAT and aggressive procedures against citizens certified to be low risk.”

Culosi’s son Dr Salvatore “Sal” Culosi Jr. was killed by a Fairfax County Police officer Jan. 24, 2006 outside his Fair Oaks townhouse. Culosi Sr. told other members of the commission that he was told by then-Fairfax County Police Chief and current deputy county executive David M. Rohrer that use of force policy changes had been made since his son’s shooting. But Rohrer declined to give him copies of the changes or tell him exactly what changes were made.

During his introduction at the commission’s first meeting on March 23 at the Fairfax County Government Center, Culosi said he has yet to receive a list of the changes. But, he said, the members of the commission, created by Board of Supervisors Chairman Sharon Bulova and endorsed by the rest of the board, should have that list as they proceed with developing recommendations for further policy changes.

“I want to assuage the public this commission is not a political cover,” Culosi said.

Bulova later responded that the information Culosi referred to would be provided to the commission.

With more than 35 members, comprised of citizens, legal experts, academics and representatives from the media and law enforcement, the commission is approaching the size of the Virginia Senate, which has 40. Bulova compared the “not too large” size to previous commissions created to review redistricting and a meals tax.

While members repeatedly commented on the “diversity” of the commission in terms of experience and expertise, Great Falls resident Jerry Santos was critical of other imbalances. “The optics are bad,” he said, observing that of the 30-plus members, less than a third are female and the majority are middle-aged Caucasian men. “I’m the only Hispanic in the room,” he said. “It’s outrageous, them throwing out the word diversity.”

The commission was created amid a swell of media and public attention to the case of John Geer, a Springfield man who was shot dead by Fairfax County Police Officer Adam Torres on Aug. 29, 2013. Details of the shooting, including the name of the officer, were kept hidden from the public and the Geer family, until Jan. 30, 2015.

The commission, Bulova reiterated, was set up to review the police department’s policies for use of force and release of information compared with best practices in other jurisdictions, and to make recommendations to the Board of Supervisors for potential changes.

“We are not investigators,” Bulova reminded the commission members. But hopefully, she said, “this is a way for something good to come out of something tragic.”

Jeff Stewart, a close friend of Geer’s who witnessed the shooting and said he was contacted by Bulova for the commission at the beginning of the selection process, said he is hoping for a “positive and constructive” process. Stewart added he would “like to see independent oversight” of the police department by citizens “at the very least. I hope that can come about in a timely manner.”

Bulova set a deadline for handing over recommendations for policy changes to the Board of Supervisors by Oct. 1 of this year. “We have a lot of work in front of us,” said commission chairman Michael Hershman.

In response to Culosi’s comment that the commission might be some kind of cover in light of upcoming elections in Fairfax County, Hershman said, “There will be no obstacles placed in our way by the county. I’ve been assured of that.”

Hershman explained the commission would designate themed subcommittees to tackle its review mission, focusing on the use of force, communication and cooperation policies, recruitment and vetting of officers and the Crisis Intervention Team. Chairs of the subcommittees will have the authority to appoint additional citizens to be part of those groups, and their meetings will also be open to the public.

The next public meeting of the commission will be April 27 in rooms 9 and 10 of the Fairfax County Government Center, beginning at 7:30, and is open to the public. The April meeting will be “foundational” with regards to establishing the subcommittees and their objectives, and answering the question “Why we’ve found ourselves in this position.”

For more information on the commission and to find a full list of commissioners and meeting schedule, visit www.fairfaxcounty.gov/policecommission. Questions for the commission chair Michael Hershman or requests to be involved with the work of the subcommittees can be directed through Bulova’s office, by calling 703-324-2321 (TTY 711) or emailing chairman@fairfaxcounty.gov.