Historic Display Over the Falls
Votes

Historic Display Over the Falls

Images from the World War II Flyover at Great Falls: In my Own Words 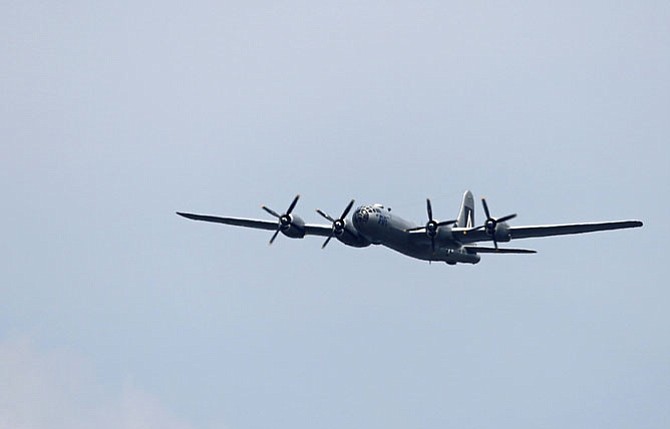 B-29 FiFi Superfortress Of the 3,970 B-29s that were built FiFi is the last one that is still flying. This shot, taken from the third overlook in Great Falls Park, shows the plane leveling out as it passed directly overhead. Walt Lawrence 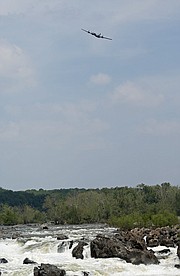 B-29 FiFi over the ‘Eagle’s Nest’ This shot shows the aircraft following the bend in the Potomac directly above Conn Island to level out over the falls. While the Conn Island Eagle’s Nest is hidden by tree foliage, it is visible from late fall to early spring.

In addition to my photographic work of the Great Falls area, I also volunteer as a docent at the Smithsonian Air and Space Museum both downtown and at the Udvar-Hazy Center at Dulles Airport. A few months ago when I learned that there was going to be a flyover of World War II aircraft to celebrate the 70th anniversary of VE Day,I immediately tried to think about where I might position myself to capture photographs of the event.

I knew the aircraft were to follow the Potomac starting out near Leesburg and to fly 1,000 feet over the Lincoln Memorial about 12:10 p.m. My first thoughts were places along the Mall, the Iwo Jima Memorial, and the bridges crossing the Potomac. I then started to think about how I might position myself in the Great Falls area to try to get shots that would feature some Great Falls landmark along with the aircraft. I even considered going out in a boat off of Riverbend Park and setting up on one of the islands; but the only landmarks in that area would be unrecognizable islands in that part of the river.

I finally decided upon the third overlook at Great Falls Park and hoped that the flyover would actually come down that portion of the river and that the altitude of 1,000 feet would get the aircraft close enough to the falls for some interesting images.

I arrived at the park about 10 a.m. on Friday, May 8, and joined two other early arriving photographers who had the same idea. As we talked about the situation, we were concerned about the altitude and that it might be too high to capture the planes and the falls in the same image. We were also concerned that their flight path might just take them on a straight vector over the beltway and down the river and that they might not even come near the falls.

At about 11:55 a.m. we could hear the rumble of aircraft engines over the pounding of water going over the falls but could not see any planes. After several minutes we finally spotted the early formation of eight training aircraft but they were way over on the Maryland side of the river and east of the Mather Gorge, too far way for any photography. The crowd on the overlook of about 200 people began to give up on the idea of seeing any aircraft up close and some began to leave.

Then, the same aircraft we had spotted earlier were flying in a westerly direction over Maryland at which point they turned and came directly over the falls. They apparently were in a holding pattern and flew directly over us about five times in this manner and were then released to fly down the river to the Lincoln Memorial.

So after this very confused beginning, the show got underway and other aircraft formations did fly down the river and either flew directly past the overlooks or over our heads.

Fairfax County Firefighters came to the same overlook location and held the American flag as the planes went over.

However, the 1,000 foot altitude for the aircraft was really too high to get any kind of dramatic shots of the falls themselves. While I got some good close ups of individual aircraft I really only got one of the B-29 FiFi coming in over the river above the falls. As a history buff I find it quite ironic that while the B-29 was not used in the European War I was able to capture a shot of the last flyable B-29 over the “Eagle’s Nest” which is located at the end of Conn Island in the Potomac above the falls.

I will be showing these images at my studio located at the Artists’ Atelier in the Village Green and at “ArtFest on the Green” May 30 and 31 on the Great Falls Village Green.