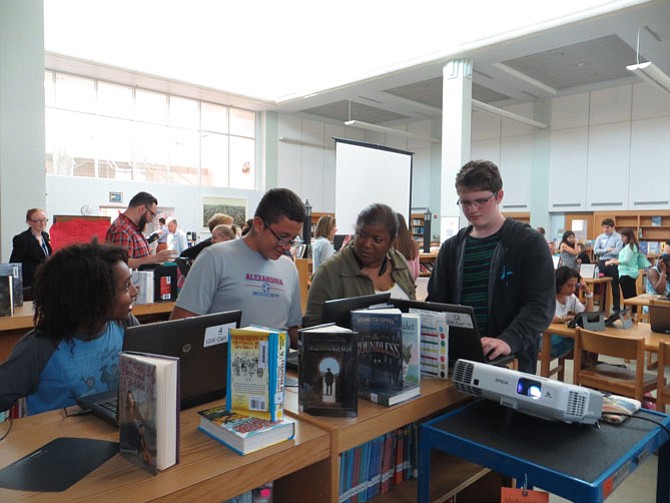 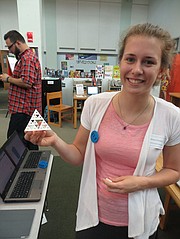 “You have died of dysentery.”

Students attending school in the 1970s and ‘80s may remember this common outcome from the educational game Oregon Trail, which put students in the shoes of pioneers travelling the eponymous trail and facing the same difficult decisions as the settlers. It left an impact on a generation of students, including Daniel Foreman, who today is the instructional technology coordinator for Alexandria Public Schools. At the 9th Annual Instructional Technology Gallery Walk in George Washington Middle School on May 7, Foreman and other Alexandria Public School faculty and staff showcased technology in classrooms, with a spotlight on video games.

On opposite sides of the library, students played educational video games with a projector showing their progress on the walls. Traci Holland-Shuford, a life science teacher at George Washington Middle School, supervised her students working on farms in a game called Minecraft. The three students, Owen Malone, Joseph Gutierrez, and Emmanuel Teferra, explained that the farm scenario teaches them about how genotypes and phenotypes affect the genetic makeup of animals, and how those attributes carry over through generations.

“The kids are gamers, I’m a gamer,” said Holland-Shuford, but admitted she’s particularly excited for the next unit. “We’re going to build worlds and the kids will have to survive in them as part of understanding how animals survive in ecosystems.”

On the other side of the library, students played DimensionU, a game that for the most part played like a traditional multiplayer first person shooter, but regularly incorporated algebra trivia questions. When characters are “slimed” by other players or access upgrades, they have to answer algebra questions with points determined by speed of the response. Stephen Ralis, a George Washington Middle School student, helped a few of the touring guests understand the rules and gameplay. When the administrators wandered away, one of the students, on a condition of anonymity, showed that there are glitches in the gameplay that can allow students to circumvent the algebra questions.

Foreman said that administration was aware of some of the glitches in the program.

“It’s problem solving, in its own way,” Foreman said. “If you want to find out the glitches and errors in the game, just ask an of the kids.”

Foreman admitted that teaching with video games comes with its own share of problems.

“[Teachers] need to know when it’s appropriate to take away the screen,” said Foreman. “It’s always about management of screen-time.” 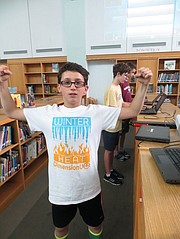 Foreman also said that having the students using the computers also forces teachers to be more aware of how students are using those programs. There are programs that can help keep students from straying from the computer’s intended purpose, but like the game, the programs aren’t perfect and it doesn’t take long for some students to find ways around these restrictions.

“They’re always going to try to find ways around stuff,” said Foreman. “The trick is to try to make that productive, part of the challenge.”

Foreman says giving students a challenge is what can separate video games from other forms of interactivity with students.

The Instructional Technology Gallery Walk also showcased technology at elementary grade levels. Emily Fenn, a second grade teacher at William Ramsay Elementary School, had her students set up blogs to write about their experiences in school as a way of connecting them with other students and parents, who could access the writings from home. Fenn said the blogs helped students in the class gradually grow from pecking out a few letters on a keyboard to being able to write full poems and entries.

One of the most eye-catching pieces of technology showcased at the Instructional Technology Gallery Walk was a 3D printer. Melissa Tilashalski, an eighth grade math teacher at George Washington Middle School, displayed various 3D printed figures designed by her after-school design club. The 3D printer was donated to her class by the Virginia Council of Teachers and Mathematics.

Finding a safe space for students to learn was a recurring theme of the Instructional Technology Gallery Walk. Jenell Pezzulich, a science teacher who works with special education classes at T.C. William’s Minnie Howard campus, implemented QR codes into her class worksheets. Pezzulich allows students to take pictures of the QR codes, a two-dimensional barcode, which links students to a video of Pezzulich working through the problem step by step. Pezzulich says this allows students to work at their own pace and re-watch sections of an explanation.

Foreman said that his experiences with Oregon Trail as a youth, including memories of repeated failure, was part of his first exposure to computers and started his background on using technology as a tool for education.

“If you give a kid a problem, they’ll try to solve it once and they’ll be done,” said Foreman. “But if you make it into a video game, they’ll try a thousand times. We see active engagement because this is a safe space that allows for failure.”