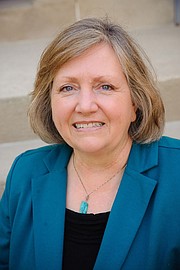 Prior to becoming the Mount Vernon-Lee Chamber of Commerce executive director, Dougherty worked for U.S. Sen. Orrin Hatch (R-Utah). Later, she served in several senior positions during the Reagan Administration. This included assignments at the Department of Housing and Urban Development and Department of Energy.

Holly Hicks Dougherty has been the executive director of the Mount Vernon-Lee Chamber of Commerce for 14 years. She has worked with her board of directors to organize and manage a variety of activities, including sponsorship of an educational scholarship program for needy students, business-to-business networking programs, seminars on small business planning, outreach, and marketing. In addition, she has organized breakfasts and lunches in which she and the board arranges for experts and community and political leaders to speak before the chamber on various subjects of interest to the business community.

A breakfast at the Belle Haven Country Club was organized by the chamber to host a political debate between the four Democratic candidates seeking the nomination for the Mount Vernon Supervisor seat being vacated by Supervisor Gerry Hyland who announced his retirement. A new supervisor will be elected in November. Following the debate, Dougherty said, “After almost 30 years, Mount Vernon will be electing a new local government leader and spokesman for Mount Vernon. … Among the issues of concern to us, the chamber would like to be assured that the person elected will be committed to support small businesses and promoting economic development in our region of the county. … We look forward to working with [whoever is elected] to develop a more simplified land development process. Over the next six months, the chamber will be doing its part to generate an ongoing public conversation with the candidates for supervisor and the candidates for the two open state offices to inform them about what our priorities are for the best interests of the near and long term future of Mount Vernon.”

Barbara Sullivan, executive director, Mount Vernon at Home and former chairman of the chamber, said, “Holly has and continues to be an effective advocate for small business owners in the Route 1 corridor. She finds time to promote local businesses and simultaneously raise money for educational scholarships for local area students who need the financial help. She is one of our most dedicated community and business leaders in the Mount Vernon community and I am very pleased to call her a colleague and friend.”

Dan Rinzel, attorney, and former chairman of the Mount Vernon-Lee Chamber of Commerce, said, “Holly is an exceptional executive director of the chamber. She has accomplished much over the years through her energetic diligence and her ability to get members of the community with varied views to work together for the common good.”

Sean Oconnell, current chairman of the chamber, said, “Holly is a warm and engaging personality and makes everyone feel welcome. She also has a good understanding of the issues affecting businesses in our region and therefore represents the best interests of our chamber members.”