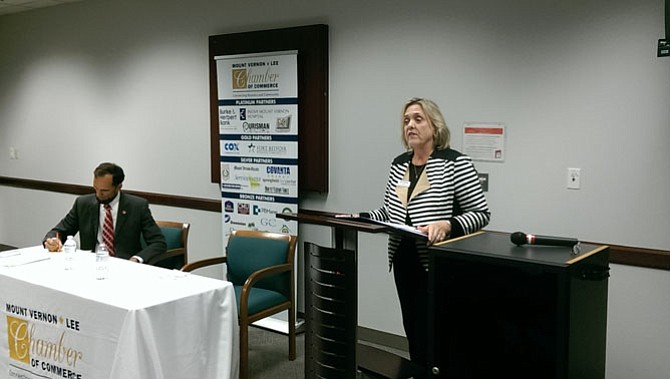 Dan Storck (left) and Jane Gandee (R) speak to citizens at a meet the candidates event hosted by the Mount Vernon-Lee Chamber of Commerce on Oct. 15. Photo by Tim Peterson. 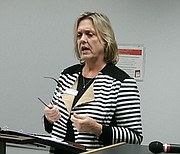 Holly Dougherty, executive director of the Mount Vernon-Lee Chamber of Commerce, said Jane Gandee is the reason that organization became involved with helping the homeless along Richmond Highway.

“She brought it to our attention,” Dougherty said. “It’s something she’s very passionate about. Last year for the holiday party, she spearheaded a drive to collect new coats and winter wear that went to Rising Hope Church.”

Dougherty called Gandee a “very dynamic individual” who is “really fun to be around, with a good sense of humor.”

Among Gandee’s other community leadership positions which include chairman of the Alexandria Salvation Army, Board of Directors of the Chamber’s Education Partnership and Legislative Committee, and serving on the Fund Development Committee for Rising Hope Mission Church, Gandee is also vice president of the Mount Vernon-Lee Chamber.

“She’s a natural leader,” Dougherty said. “It’s been interesting for me to watch other business owners here respond to her, her leadership, the way she motivates people.”

Gandee is a business owner herself, running a ServiceMaster Restore franchise. However she said she stepped away from the company entirely in April to devote her full attention to the supervisor role.

“It will get my full attention, I’m anxious to get started,” Gandee said at the Oct. 15 meet the candidates event hosted by the Mount Vernon-Lee Chamber of Commerce at the South County government center.

“I think we have a problem in Mount Vernon: It doesn’t look like the rest of the county — the roads, schools, economic development is worse,” Gandee said. “We need new leadership, new ideas, to work together to get the problems solved.”

Retired physician and Mount Vernon resident since 1970, Dr. Thomas Cleary met Gandee through the Chamber of Commerce 10 years ago. Cleary said he’s impressed with Gandee’s long-hours work ethic and how successful she’s made her business. He also appreciates “her knowledge of the workings of the government and what’s necessary for changes in the way projects in the community can be accomplished, both private and public.”

As a person, Cleary says Gandee is “outgoing, just a very friendly, warm person. I’ve heard her speak to disparate groups where she’s always, always received well and is open to hearing other people’s opinions.”

The Rev. Lorenzo Hill is the pastor at Cranford United Methodist Church, where Gandee is a member, teaches Sunday School and serves on the nurture outreach committee that ministers to members who are sick, shut in or haven’t been to church for a period of time.

“She’s an above average member, very committed, dedicated and involved,” said Hill. “she’s honest, fair, and not changed. She’s consistent with the person I met 10 and a half years ago.”