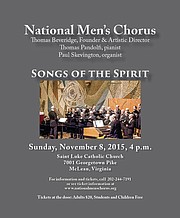 National Men’s Chorus will open its 17th season with “Songs of the Spirit,” a program spanning five centuries of European and American sacred music. The concert will take place on Sunday, Nov. 8, at 4 p.m. at Saint Luke Catholic Church, 7001 Georgetown Pike, in McLean.

The program will feature pianist Thomas Pandolfi and organist Paul Skevington (both of them will also perform as soloists).

The program will be conducted by the chorus’ founder and artistic director, Thomas Beveridge.

Pianist Thomas Pandolfi is a prodigious American virtuoso known for his revival of the core repertoire from the “Golden Age” of pianism. He has performed and recorded with many European orchestras and he has made frequent appearances in Eastern Europe and China, where he has been received by critical and knowledgeable audiences with enthusiasm usually reserved for pop and rock stars.

Paul Skevington, organist, is the Minister of Music and Liturgy at Saint Luke Catholic Church in McLean. In his 20 years at the church, he has developed a well-rounded and highly acclaimed sacred music program, with the 35-voice Festival Choir at the center of the musical activities. Skevington holds degrees in organ performance from Indiana University and a doctorate degree in liturgical music from The Catholic University of America. He is past dean of the Northern Virginia Chapter of the American Guild of Organists and past chairperson for the National Association of Pastoral Musicians Section for Organists.

Artistic director Thomas Beveridge is a recognized authority on music for male voices. He is an accomplished soloist, composer, and the artistic director of both the National Men’s Chorus and the New Dominion Chorale. His Yizkor Requiem was recorded for commercial distribution by the prestigious Academy of Saint Martin in the Fields, under the baton of Sir Neville Marriner. One of Washington’s most versatile musicians, he was named “the Dean of Washington Composers” by “Washingtonian Magazine” and honored for his valuable contribution to Washington choral music at a ceremony at the French Embassy.

National Men’s Chorus appeared last year in a holiday concert at the Birchmere in Alexandria, with the nationally acclaimed singer/composer Debi Smith, as well as in two notable concerts at Saint Luke Catholic Church. The Chorus has performed at the Library of Congress, the National Gallery of Art, the Washington Convention Center, and in the Terrace Theater in the John F. Kennedy Center for the Performing Arts, as well as on concert stages and in concert series throughout the Washington, D.C. area.

Tickets will be available at the door for $20 (general admission). Students and children will be admitted free of charge. For further information, go to www.nationalmenschorus.org or call 202-244-7191.