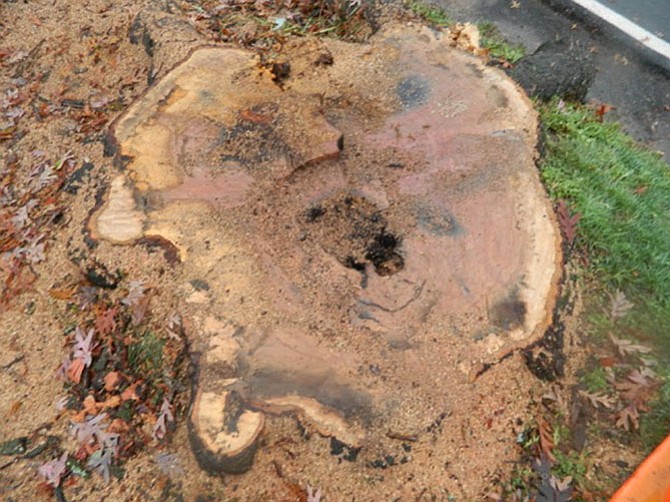 Joni Mitchell was right--we don't know what we got til it's gone: The stump of the fallen oak. Photo contributed

Thanks to The Connection for printing homage to the last heritage oak tree in Great Falls. Recently, three heritage oaks had been lost to extreme and substandard utility pruning, felling to make room for infrastructure that was never installed, and condemnation after routine pruning to correct its lean was neglected.

The Great Falls Citizens Association hired us to thoroughly inspect the leaning tree and its twin, consult the best science available, and provide management options. We climbed into the canopy, and tomographed the trunks. Applying European research specific to the fungus involved, we specified standard pruning. VDOT obtained reports that were based on incomplete inspections, engineering formulas, and many assumptions, recommended removal.

VDOT never questioned our findings, but removed the leaning oak. Our report that a little reduction restores stability was confirmed by eyewitnesses. When the first cuts were made, the tree pulled back toward vertical. VDOT's contractor also cut four limbs from the top of the last heritage oak. Arborists know that topping kills trees. In 2015, VDOT hired more consultants who tomographed the upper trunk, drilled into nine buttress roots, made many assumptions, and condemned the tree.

So say goodbye to the last heritage oak in downtown Great Falls, and know why your landscape is lacking. The beautiful greenery that once cooled the community, sustained its history, cleaned the air and water, and gave habitat to wildlife was taken for granted, and lost. Joni Mitchell was right--we don't know what we got til it's gone.

For a study in contrasts, compare our 2012 report with VDOT's reports. Like George Washington, a tree cannot tell a lie: a picture of the stump today demonstrates the integrity revealed in our 2012 tomograph. This last oak fell not to science or reason, but misinformation and fear.