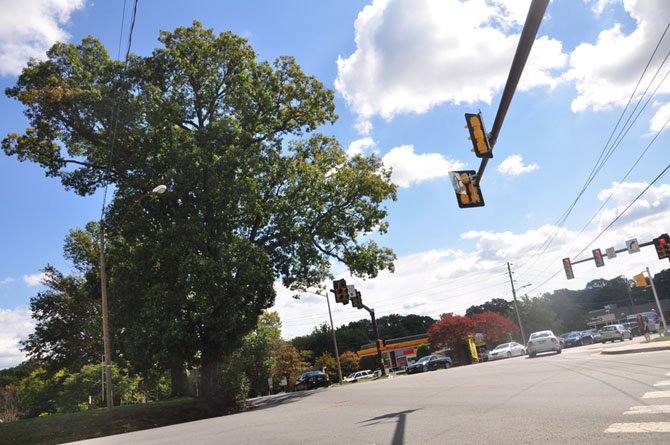 The trees located at the corner of Georgetown Pike and Walker Road, scheduled to be removed starting Oct. 1, will be evaluated by a community arborist before a final decision is made. Photo by Alex McVeigh. 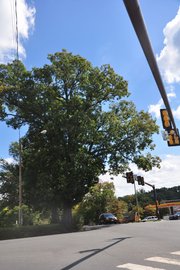 The trees at Georgetown Pike and Walker Road are the subject of a community debate centered around their removal.

The Virginia Department of Transportation has postponed the removal of two white oak trees at the corner of Georgetown Pike and Walker Road, allowing the community to hire an arborist to examine the two trees.

They previously announced Sept. 18 that the two trees would be removed as part of the removal of 59 other dead or dying trees in the area, a decision that came after a resident was killed after a tree fell onto his car just west of the two in question.

The Great Falls Citizen Association Board voted to request a delay in their removal, and VDOT announced Sept. 28 that the community should hire an arborist to assess the health of the two trees. VDOT will also consult with a Fairfax County arborist.

THE TREES were scheduled to be removed over three days, starting Oct. 1, as a result of the report given by an arborist hired by VDOT.

The report from arborist Edward Milhous on the tree just east of the intersection of Walker Road and Georgetown Pike, which VDOT is considering removing.

Edward Milhous, a certified arborist with Trees Please of Haymarket, Va. was contracted by VDOT to inspect the trees. His inspection included a walk around, checking points by conducting a visual inspection, “sounding” with rubber mallets and inspecting the tree crowns with binoculars. No invasive procedures were performed.

“The tree in the corner has a slight lean toward the intersection. The problem with that tree is there is a lot of open and obvious decay around both corners. I suspect that tree has been hit by cars, snowplows and who knows what. They widened the road some years ago, [in 1977], and they certainly did damage to those trees when they widened the road, they couldn’t help but do damage,” Milhous said.

The report from arborist Edward Milhous on the tree at the intersection of Walker Road and Georgetown Pike, which Milhous recommends be removed.

Milhous’s report addressed Tree #1 (located approximately six feet east of Tree #2) and Tree #2 (the one closest to the crossroads). He pointed out that both trees have “significant decay” in the large roots at the trunk, which provide support and anchorage.

His report says that Tree #2 poses a greater risk, being closer to the intersection and with more decay.

“Tree #1 has a fruiting body of the decay fungus 'Inonotus dryadeus' at its base, I was able to probe about 24 inches into its diameter into a cavity nearby,” he said. “Sounding with a rubber mallet indicated that the decay associated with the cavity extends several feet up the tree from the base. Sounding also identified decay in a large exposed root growing on Georgetown Pike.”

He concluded that there is a significant risk with Tree #2, and that it should be removed.

“The open wounds and obvious decay involve about half the base of this tree, and this weakened tissue is on the underside of the lean of the tree, meaning it is the compression wood supporting the tree that has been compromised by decay,” he said. “Once enough of the area is compromised, the tree will collapse; however, there is no way to know when this might occur.”

Milhous said he felt Tree #1 poses a “moderate risk,” but would be viable for a few years.

“Since there is no effective treatment for decay, the risk will increase over time. It would also increase some if Tree #2 were taken out,” he said. “If it is kept, it should be pruned to reduce the hazard associated with the large dead wood. It should be treated for borers; such treatment may or may not be effective. It should also be inspected on an annual basis and after strong storms.”

RESIDENTS at the Sept. 25 meeting were divided on the matter, an informal poll taken among attendees resulted in about half in favor of removal, half against.

Ralph Lazaro, owner of the property the trees live on, says he hopes the trees are removed before anyone else gets hurt.

“Spending money from VDOT or the GFCA to try and extend the life of the second tree is throwing money away, and also dangerous just waiting for the tree to fall,” he said. “It has taken the death of one resident to bring this issue to light… what further proof do we need to make the right decision? Is it more important to save a falling tree at a very busy intersection and not regard the safety of our citizens?”

Joan Barnes, a former Transportation committee chair for the GFCA, said she would be concerned about the traffic impact if the trees are removed.

“I will be concerned about safety if the trees are gone. There are studies that show that trees by the sides of our streets slow down traffic, lower accident rates. I believe if both trees are gone, there will be a higher propensity of traffic going southbound on Walker Road will run the yellow light because they think they can see Georgetown Pike.”