Lewis: Civil Rights Fight Not Over 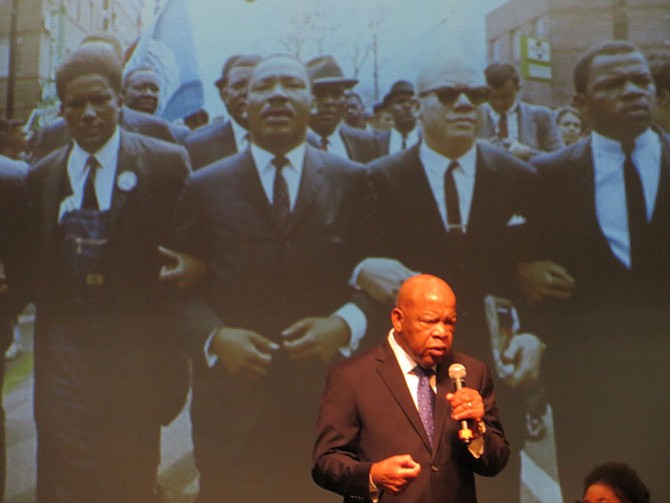 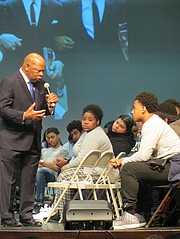 In the middle of Civil Rights movement, young Americans turned towards civil rights leaders like John Lewis for leadership and advice. Fifty years later, a room full of T.C. Williams High School students gathered in the school’s auditorium to ask Lewis many of the same questions he fielded during the 1960s. How can students get involved in the fight for equality? What are the issues worth fighting for? How to fight for them? Lewis, now a congressman from Georgia, connected his historical experience with the struggles young minority students face today.

The event, run by TC students, is part of the school’s celebration of its 50-year anniversary. Dr. Jesse Dingle, TC’s new principal, explained to the students that Alexandria was facing its own unrest when the new school was desegregated. Racial tensions at the school were dramatized in the film “Remember the Titans,” but for many students, questions about race and Civil Rights aren’t just issues of the past. The discussion with Lewis reflected that the Black Lives Matter movement and the protests at Missouri were very much on the mind of TC students. Lewis said he was deeply moved in seeing students come together and say that they would not tolerate discrimination.

“Speak up,” Lewis urged students, “speak out, and in a non-violent way.”

One student asked about Lewis’ response to the deaths of Trayvon Martin, Michael Brown, and the subsequent protests at Ferguson. Lewis said that during the Civil Rights movement, they had to be prepared to face violence and resistance, and attended workshops on how to face it in nonviolent ways. Lewis added that he didn’t see why police officers shouldn’t go to the same types of workshops.

In response to a question concerning the recent attacks in Paris and Beirut, Lewis said this idea reaches out to an international scale.

“We’re all shocked, but we can’t continue to drop more bombs,” said Lewis. “We need to give people hope.”

Some students questioned whether non-violence was always the answer, even in situations where it seemed to achieve no results.

“For me, nonviolence is an immutable principle that you cannot deviate on,” said Lewis. “If you want to redeem the soul of America, it must be through peace and love.”

Alyssa Forbes and Rosie Cool, two students who introduced Lewis, said afterwards that they were inspired by his message.

“I was extremely nervous,” admitted Forbes, but said that vanished completely once she met Lewis and felt at ease, “It was not what I expected.”

“He and his message were both wonderful,” said Cool, and said that there are aspects of the discussion she can implement in her everyday life. “It’s a reminder that everyone comes from somewhere.”

Cameron Donaldson, a TC senior, was part of the group that helped set up the event and described the discussion as riveting.

“There is definitely a correlation of the Civil Rights from 50 years ago and the Black Lives Matter movement of today,” said Donaldson. “I really took away from this how the past issues related to the movement today. The way he said that violence can never be the answer, even in extreme circumstances, I think that’s something we can apply today.”

Lewis’ stories, about the march in Selma and the speeches in D.C., were familiar to students as history. But Forbes and Cool said there was something special about hearing them as first-hand accounts.

Lewis recalled his family being scared when he was young, for good reasons. They warned Lewis “not to get in the way of things.” But after reading about the acts of Rosa Parks and some of the early struggles of Martin Luther King Jr., Lewis felt he couldn’t sit back any more.

As Lewis began to get involved in the Civil Rights movement, those concerns only grew more dire. Lewis recounted that churches were being bombed, homes threatened.

“We were beaten,” Lewis said, and told the students about having his legs knocked out from under him. “I thought I was going to die. But 50 years later, I’m still here.”

But Lewis, and many students in attendance, believe the fight for Civil Rights is not over. Repeatedly, Lewis made reference to forces in America that are trying to pull the nation back into a segregated past, pointing to the 2013 decision by the Supreme Court to strike down key parts of the 1965 voting rights act as one of the most recent examples.

“I felt like crying,” said Lewis. “I gave blood on that bridge and almost died. Several people did die, including three young men I knew well.”

“They didn’t die in Vietnam or in South America, they died here,” said Lewis. “There are forces in America that want to take us back. Well, in 1965 I said I believe in one person, one vote, and I believe that today.”