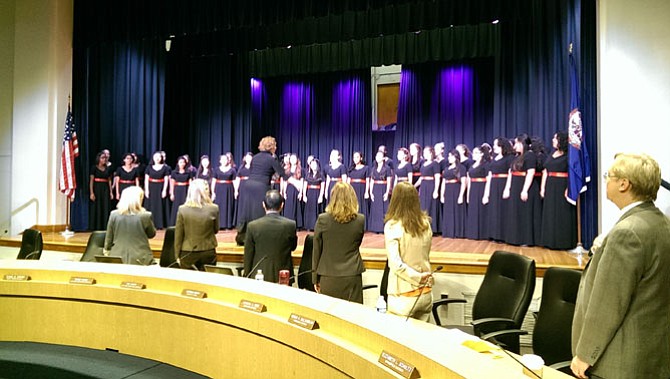 Dr. Randy Hoff, chief executive officer of Cenergistic, announces that with 146 Energy Star-certified schools, Fairfax County has the highest number of certifications of any district in the country.

In the last year and a half, Fairfax County Public Schools have been able to reduce the energy consumption in their buildings by 15 percent. That cut down resulted in savings of $4.5 million, according to a release Sept. 25 by the school system.

According to Dr. Randy Hoff, chief executive officer of Cenergistic, the school system spends approximately $34 million annually on utilities while operating its more than 200 campuses.

“It’s a significant expense,” Hoff said at the board’s regular meeting on Sept. 24. He said the job is to “ensure we’re eliminating waste and maintaining comfort in the buildings as well.”

During the board’s consent agenda, Goli Trump was appointed auditor general of the six-member Internal Audit Office, taking effect Sept. 28. Fairfax County Public Schools created the position to oversee both the programs and financial evaluation aspects of the audit process.

According to a release from Fairfax County in August, Trump is tasked with “implementing a risk-based audit plan and directing audits of the school division’s offices, departments, schools and programs to help manage strategic risks, improve or develop efficient and effective business processes and identify best practices.”

“She has a strong background in risk management and experience in numerous industries including education, employment services, technology, marketing and transportation,” School Board chairman Pat Hynes said in a statement. “The addition of an auditor general is the latest step in the board’s efforts to make the School Board audit function more robust and independent.”

At-large board member Ryan McElveen added that he’s “excited for her to oversee our board’s ever-growing audit process.”

Though there have previously been leaders on the programs and financial sides of the audit, McElveen said it’s the first time the two components have been overseen in this manner. “She adds a unique perspective to that office,” he said.

Hoff came before the board to announce not only the energy and money-saving accomplishments of the cooperative analysis, but that with 146 Energy Star-certified schools, Fairfax County had taken the lead as the most efficient district in the United States.

“This is important to be first on,” Superintendent Dr. Karen Garza said, “because it demonstrates to our community how serious we are about taking care of the precious taxpayer dollars that we’re stewards of.

“Every dollar we save,” Garza added, “can be directed back to classrooms, teacher sal increases, is important to our school system.”

Michael Katz, with the Energy Star program and the Environmental Protection Agency, said that on average, schools with the Star certification generate about 30 percent less greenhouse gas emissions than non-certified schools. He, as well as several board members, commented on the way this energy-conserving program can both impact climate change and provide educational opportunities for students on being better stewards of the environment.

“The buildings in which we work, play and learn have a tremendous role to play in addressing this challenge,” said Katz.

Katz and Hoff explained that 30 percent of energy used in school buildings is wasted, and the main power draw for utilities is heating and cooling.

So working with existing infrastructure, the Cenergistic analysts have been evaluating the schools’ ventilation rates, occupancy times, humidity, transition to unoccupied buildings and circulation pumps. Hoff used the examples of snow days, summer vacation and after-school as opportunities for uses of the school to be consolidated in a way that requires less heating or cooling energy.

Hoff’s next goal is reaching a 25 percent reduction in consumption, while continuing to ensure students and teachers are comfortable and in a hospitable learning environment.

“We have a lot of runway ahead of us to improve even more,” Hoff said.