Franconia: Police Investigating Use of Taser 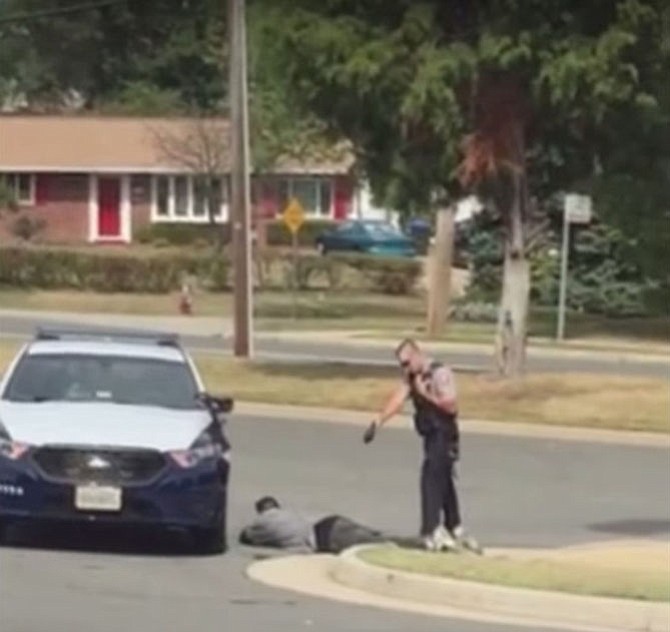 One of two cell phone videos of the incident shows a Fairfax County police officer use a taser on Cansler and then handcuff him, with help from another officer. Photo courtesy of Fairfax County Police Department/Video provided by independent witness 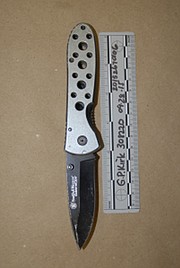 Fairfax County Police released photos of the knife found on Cansler after he was arrested.

Fairfax County Police Internal Affairs officials are investigating the use of an “electronic control weapon,” or taser, by an officer on a suspect that took place in Franconia on Sept. 24.

A short cell phone video of an officer forcing the suspect to the ground in front of a police cruiser surfaced after the incident, prompting a release from police Chief Edwin Roessler that Internal Affairs would investigate the event.

On Monday, Sept. 28, the police released a more detailed explanation of the incident, including an audio recording of the original service call to officers and two cellphone videos taken by witnesses that stream on YouTube. The report names the suspect in the incident, though it doesn’t provide the names of any of the officers involved.

The public report also says, “The officer’s discretion was appropriately used to deploy a form of a less-lethal force and in compliance with all policies and laws in this matter.” While the statement itself doesn’t indicate who made that determination, police spokesperson Lucy Caldwell said the report can be attributed to Chief Roessler.

Caldwell additionally said the Internal Affairs investigation has not concluded and witnesses are still being sought.

ACCORDING TO THE REPORT, the suspect first entered the employee break room of SunTrust Bank in the Rose Hill area of Alexandria. When he walked out of the bank with the manager’s sunglasses, the branch manager called bank security, who then contacted Fairfax County Police with a description of the man.

The report continues that an officer saw a man at a nearby convenience store who met the description the bank security provided. The officer approached the man, Elton Cansler, 35, of Alexandria, and asked him if he stole the sunglasses and the man answered that he had.

When the suspect moved his hands forward towards his waist, the report says the officer believed he was reaching for a knife that he had previously seen clipped to the suspect’s front pants pocket. This prompted the officer to deploy the taser for one five-second cycle, which is explained in the report introduction as a policy directive for a “less-lethal force option” and in this case was “lawful and appropriate.”

“Mr. Cansler was actively resisting the officer by physically struggling and refusing to obey lawful commands to place his hands behind his back to be handcuffed to complete the arrest for the crime he committed,” the report says. “Additionally, it was very clear to the officer that Mr. Cansler had a knife in his right front pants pocket and he kept placing his hands in that pocket.”

Cansler was arrested for committing larceny and assaulting a law enforcement officer. He was taken to the Fairfax County Adult Detention Center after disregarding commands at the Mount Vernon District Station. Cansler was cleared medically and released from the jail on bond on Sept. 25. His court date is scheduled for Nov. 24.

POLICE ARE ASKING witnesses with additional information to contact the Internal Affairs Bureau by phone at 703-246-2793. To read the full release from police, including links to the videos, visit fcpdnews.wordpress.com/2015/09/28/update-use-of-force-investigation-from-september-24-2015.