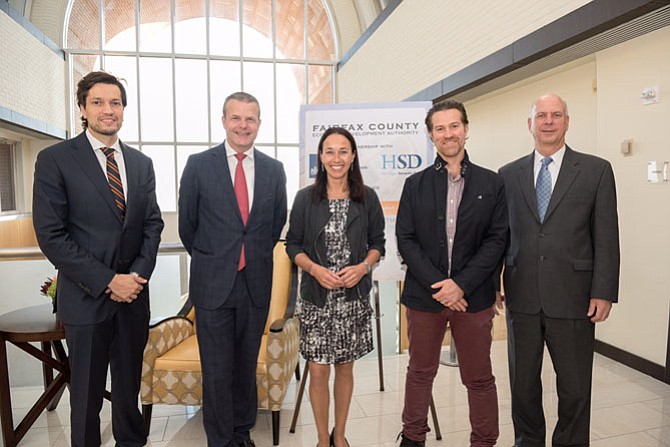 With all its sophistication and intricacies, cybersecurity starts with a simple premise.

“There are a lot of people interested in disrupting your sovereignty,” he said on Friday, Oct. 9 on the 17th floor of the Tower Club in Tysons. “Intelligence is understanding everything about your environment and taking that to defend yourself,” he said.

The global cybersecurity market is worth $75 billion and will grow to $170 billion by 2020, according to the Fairfax County Economic Development Authority.

Proximity to the federal government, to the commercial sector, and to three airports, makes this an influential area, he said.

LAST FRIDAY, OCT. 9, the Fairfax County Economic Development Authority (FCEDA) signed a memorandum of understanding with a delegation of Dutch and Flemish cyber-related businesses brought to the United States by The Hague Security Delta (HSD), the largest security-related cluster of businesses, governments and academic institutions in Europe.

The FCEDA promotes the county as a business and technology center and helps companies locate and expand in the county.

Officials want the county to be a global leader in cyber security, with a cybersecurity campus in Northern Virginia in the future.

Dr. Gerald Gordon, president and CEO of the Fairfax County Economic Development Authority called the event an “extraordinary opportunity to create meaningful partnerships in an area that is a significant concern for people around the world but also represents an opportunity for businesses, governments and academia to create a more secure planet.”

Henne Schuwer, the Dutch ambassador to the United States, Guido Landheer, the deputy vice minister for foreign trade in the Dutch Ministry of Foreign Affairs, and representatives of northern Virginia businesses involved in cybersecurity and other security-related industry sectors attended.

GORDON EARNED the Jeffrey A. Finkle Organizational Leadership Award for a “lasting commitment to the field of economic development.”

“It comes from my peers across the country and beyond,” Gordon said, calling it “quite an honor.”

Gordon has worked at the FCEDA since late 1983.

In addition to its headquarters in Tysons, the FCEDA maintains marketing offices in Bangalore, Munich, London, Los Angeles, Seoul and Tel Aviv.