The Archbishop of Canterbury visits Alexandria for consecration of new Immanuel Church. 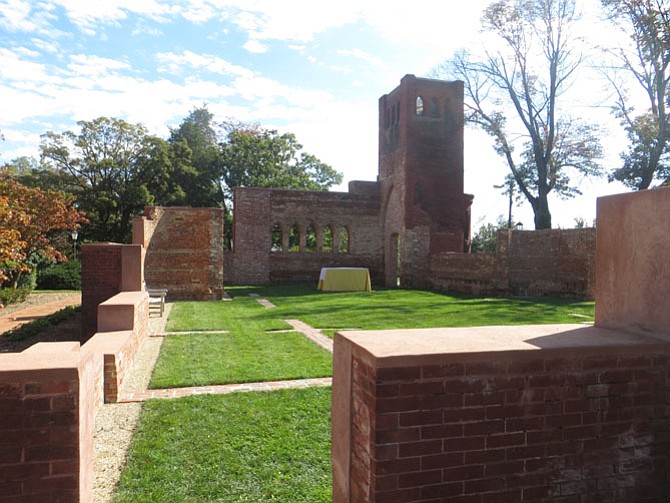 The old Immanuel Chapel, destroyed by a fire in 2010, converted to an open garden. Photo by Vernon Miles.

“To the glory of God, this chapel burned.” 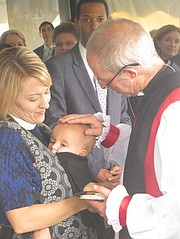 Kirsten Baer and her son, Andrew Baer, receiving a blessing from Justin Welby, the Archbishop of Canterbury.

To many attending the consecration of the new Immanuel Chapel following the destruction of the earlier incarnation of the building in a fire, the comment by Justin Welby, the Archbishop of Canterbury, may have come as a bit of a shock. The original Immanuel Chapel at the Virginia Theological Seminary, built in 1881, was destroyed in a fire in 2010. Over $14.3 million was raised in donations to build a new chapel, which was completed earlier in 2015. The Rev. Ian Markham, Ph.D., and dean and president of the Virginia Theological Seminary, thanked Robert A.M. Stern architects and all of the donors who made the building’s reconstruction possible.

“Is it possible?” continued Welby, “Can such an event ever be seen to the glory of God? Yes. Through the death and resurrection, we are brought back into the presence of the living God through his resurrection of Christ.” 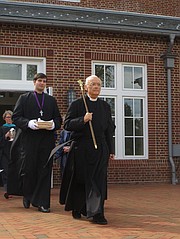 Welby’s homily urged the community of the Virginia Theological Seminary, and the Episcopal Church in general, to focus on the importance of the services rendered in the buildings rather than on the buildings themselves. Among the many literary allusions Welby used in his service, the first and most recurring was to A.A. Milne’s Winnie the Pooh. Welby referenced a story in which Winnie-the-Pooh rides out a flood on a series of buoyant honey pots.

“For a little while Pooh and [the pots] were uncertain as to which of them was meant to be on the top.”

Welby said church congregations and their buildings can be similar to Pooh and his honey pots. Welby emphasized that the buildings are given meaning by the people that inhabit them, and encouraged the congregation to love and accept one another.

“We bring, in this building this morning, every sorrow and worry that exists in the human heart, and every sin and failure that would horrify us if they were painted on the walls,” said Welby, “... but also the beauty of society would be demonstrated … Holiness is not neat and clean; abiding by rules … Holiness is never tidy. Let this place never be a place that seeks to tidy people up.”

Welby was joined at the consecration by a host of church dignitaries, including the Rev. Katharine Jefferts Schori, the current presiding bishop of the Episcopal Church, and the Rev. Michael Curry, who will become the presiding bishop of the Episcopal Church in November. Four hundred and fifteen members of the church watched the consecration from the chapel, while 500 more watched from tents out on the lawn. 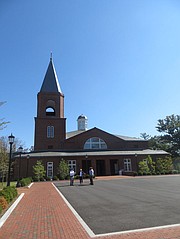 A front view of the new Immanuel Chapel.

Gregory Millikin and Chandler Whitman graduated from VTS and were ordained in 2015. After the fire, they said students worshipped in another chapel across campus. Their graduation had been held in the new chapel in May, but Whitman said it still felt special and inspiring to be in the newly consecrated building. As for Welby’s sermon, Whitman said she was particularly pleased to hear the Archbishop discuss hopes for, one day, uniting the church. For Millikin, the best part of the service was seeing the range of talents that had been brought together for the ceremony, in particular praising the school’s chorus and the architect’s designs.

“It’s inspiring to see everyone’s talents brought together for the glory of God,” said Millikin.

Ted Williams, who graduated from VTS in 1977, said that it has been a long wait for the new chapel’s consecration and opening. As class steward, Williams says he heard about the fire before it was put out, and lamented that so many artifacts from the building couldn’t be saved. A famous stained glass window by Louis Comfort Tiffany, and signed by the artist, was among those lost in the fire. Williams enjoyed the consecration, but said it still wasn’t enough to completely erase the sense of loss.

“I like the new one, but the old one was 130 years old,” said Williams. “So I wonder, in 130 years, how this new church will continue to serve the needs of the people.”