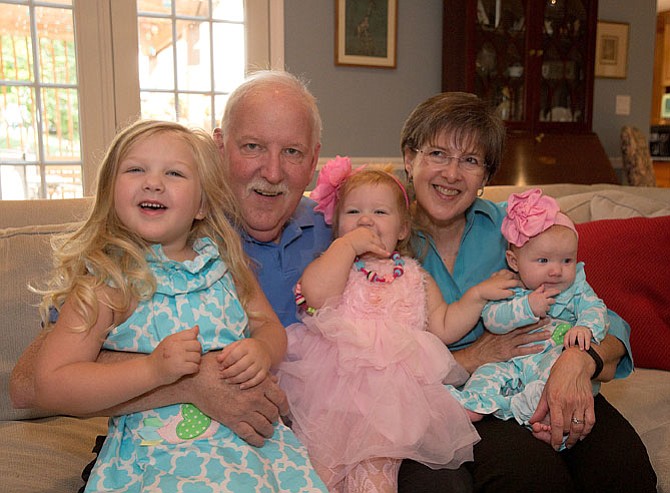 Kathy and Steve Smith with their three granddaughters, (from left) Kathy Cate, Meredith and Caitlynn. 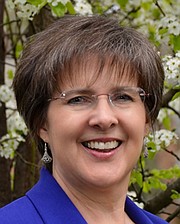 Education: Bachelor’s in sociology and elementary education from Muhlenberg College in Pennsylvania.

Community Accomplishments: Since being elected to the School Board in 2002, she was elected its chairman for three years, vice chair for two years and chaired its Governance ​C​ommittee, Administration and General Services ​Committee and the Instruction, Special Services and Youth Development ​Committee. She also co-chaired the School Board’s joint Infrastructure Financing Committee with the Board of Supervisors. Previously, she was president of the Poplar Tree, Rocky Run and Chantilly PTAs, and she’s also served in numerous leadership roles in various local youth sports.

Why Smith Is Running

After serving nearly 13 years on Fairfax County’s School Board, Democrat Kathy Smith is vying for Sully District supervisor. And she and many others believe she’s the best person for the job.

“I’ve lived in this community since 1984 and have seen the changes here,” she said. “I have experience in the community and a proven record of leadership. Some 400 different people have donated to my campaign, and it’s humbling seeing their support.”

A resident of Chantilly’s Poplar Tree Estates community, she taught elementary school, was president of the Poplar Tree, Rocky Run and Chantilly High PTAs and was an officer in the County Council of PTAs before being elected to the School Board in 2002 – and then three more times.

“I got an understanding of budgeting and staffing, served on school plan committees and found out what was happening across the system,” said Smith. “I served three times as School Board chairman and, as a leader, I was able to pull the board together to move us forward.”

“Over half the county’s General Fund goes to the school system, and it’s now up to $2.6 billion,” she continued. “Having experience working through large budgets — and balancing when to expand programs and when not to — helps me be a supervisor. And it’s not always easy work because you’ve got to make tough decisions.”

Smith said she and current Sully Supervisor Michael Frey worked well together, helping residents get involved in issues ranging from the budget to street lights near Centre Ridge Elementary. She also served on a joint School Board-Supervisors committee to examine capital spending and needs countywide.

“County schools, parks and transportation staff presented information on their needs, and I learned how capital needs are funded and about sound, financial planning,” she said. “When you’re an elected official, you’re using people’s hard-earned money and have limited resources to pay for [what’s needed]. So you must find the best way to use them.”

An example was changing high-school start time. “Not everyone wanted it to change,” said Smith. “My biggest concern was teachers’ salaries. So when I weighed the $5 million cost of making the change with the fact that we’re not paying our teachers enough, I voted no on the time change. I also voted no on the School Board raise for the same reason.”

She’s also knowledgeable about more than school issues. “When I decided to run for supervisor, I reached out to Planning Commissioner Jim Hart so I could understand land use and the processes associated with it,” said Smith. “And as a School Board member, I was already familiar with developers’ proffers.”

She’s met with Frey and his staff, as well, and learned about various land-use projects in the pipeline and about working with the community and developers on them.

Regarding transportation, said Smith, “Now that the NVTA is providing state funding for transportation projects, we need to look at the congestion issues and where the next projects should be. Route 28’s been improved, but it’s still a mess when you get to Route 50. And since so many people in Sully work in D.C., what happens with the I-66 improvements is also important. So I’ve been asking people what they think about it and going to the meetings.”

Noting how people’s eyes light up when someone mentions the Mosaic District in Merrifield, she said, “We need to talk about how we can combine land use, transportation and development to do the live, work, play piece in Sully District, too.” Housing is also important, said Smith.

“When teachers, firefighters and police can’t afford to live here, we’ve got a problem,” she said. “So we need to have discussions now about how we develop these things smartly. We need to continue building that sense of community and think about the future so we don’t become so clogged with traffic that we can’t get around.”

Strong schools are also needed, said Smith, because “that’s why families and businesses move here and that’s the core of the community. I also hold dear our strong libraries, human services and park systems and have worked with all of them. So my experience is relevant to being Sully District supervisor.”

And unlike her opponent who, if elected, plans to keep his job while being supervisor, Smith would do it full time. “People have different schedules; you can’t just do the work at night,” she said. “Supervisors serve on various boards and commissions, and Sully’s used to having a supervisor available to the community full time. People don’t realize how much work is involved. To really be prepared for the board meetings, you need to read up on and research the issues and reach out to the community about them.”

A supervisor must be available to meet with homeowners associations and tell residents what’s happening in their communities, she said. “You give them information, get their feedback and tell them how to get involved,” said Smith. “That transparency is important. And since the salary’s $95,000, I believe that, for that kind of money, it should be full time.”

She said Sully’s supervisor must also understand what strong, community partners CYA and SYA are and the difference they’ve made to local youth, including her own, four children. “I want them to continue their success,” said Smith. “And right now, we need to creatively find more indoor, athletic space for them.”

The supervisor’s job isn’t partisan, she said. “It’s to help people improve their lives — which is what I’m committed to doing. I’m thoughtful, I do my homework and I talk to people before making decisions. I have no agenda; I just want to make sure we hold onto the great community in which I raised my kids.”

Mark Hall, of Poplar Tree Estates, has known Kathy Smith 23 years, through the neighborhood and the schools. “Kathy is an outstanding public servant,” he said. “I admire her for working so hard for little reward, in many instances. Being on the School Board is a tough job.”

Describing her as of “high character,” he said she’s had to make some tough decisions that haven’t always been popular. But in the long run, they’ve proven to be beneficial to the Sully District.”

“She’s always been supportive of all children, including those with disabilities, and disabled adults, too,” said Hall, an executive with a nonprofit in Chantilly that serves people with disabilities. “And she’s taken the time to learn about the services available to them in the community and ask questions so she can understand the challenges facing them.”

He said Smith’s gained the experience necessary to make difficult decisions dealing with budget issues and balancing the wishes of many, different constituencies. “Being on the School Board was excellent training,” said Hall. “Kathy’s learned how Fairfax County government works and has worked with it and formed wonderful relationships with the supervisors — and that’s valuable. She’s done the same with our state representatives and understands what it means to be bipartisan.”

At-Large Planning Commissioner Jim Hart, of Centreville’s Virginia Run community, has known Smith more than 10 years. “She’s very civic-minded and has been involved with community activities as long as I’ve known her,” he said. “And in interactions between the Planning Commission and School Board, I’ve always been impressed with her abilities.”

Hart said Smith is extremely familiar with the schools and has always taken the time to learn about problems and issues as they come up. He’s also pleased that Smith plans to be a full-time supervisor. “There’s no way the job can be done, otherwise,” he said. “A supervisor has to meet with government officials and county employees every day, during normal work hours.”

Noting that Smith has often expressed an interest in pending land-use cases, Hart said, “I think she’ll be able to hit the ground running. She knows how the county works and has worked with both the Planning Commission, Board of Supervisors and Board Chairman Sharon Bulova for years, so becoming a supervisor would be a logical extension to what Kathy’s been doing already.”

Former 67th District Del. Chuck Caputo, of Oak Hill, also supports Smith. He’s known her since 2002 and calls her personable and caring. “Her ethics are top-notch, and she’s a loyal and sincere friend,” he said. “She also knows what’s important to the citizens of Sully District.”

When times are tough, said Caputo, “You can always count on her to be a smooth, even-keeled person to discuss any issue. Kathy’s unflappable and can be passionate about many subjects without becoming emotional. She also brings her experience and abilities to bear on any problem that needs solving.”

Besides that, he added, “She has the background necessary to do the job — the ability to analyze project and budget costs. For all these reasons, I feel that Sully citizens can entrust their best interests to her.