Alexandria: ‘The Math Doesn’t Add Up’

Fights over debt and development heats up in final council debate. 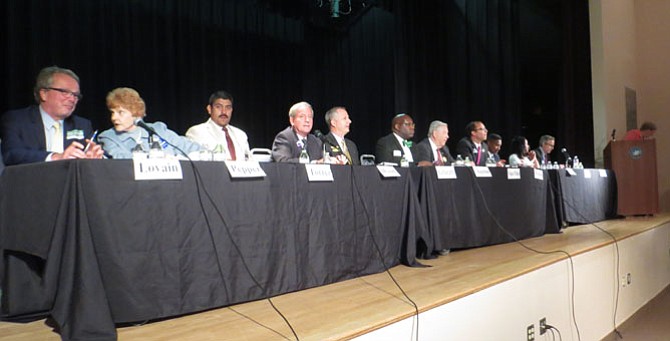 The light at the end of the campaign tunnel is within sight. Alexandria’s City Council candidates fought their last debate of the campaign season on Oct. 14 at the Nannie J. Lee Recreation Center hosted by the Old Town North Civic Association.

Even among a group almost perfectly divided between Republicans, Democrats, and an independent, there were still a few issues where the whole group agreed. They agreed, for example, that the former GenOn power plant will take time to clean up, but afterwards its use should be determined with the input of neighbors and preferably with substantial green space involved.

On other issues, the debate saw some of the most bitter fighting yet in the campaign. Each candidate was given a small deck of green cards to be thrown over the front of the desk if they wanted to follow up on a statement made by another candidate. On the topic of infrastructure and development, the front of the desk was a flurry of green cards flung towards the audience.

Republican candidate John “Bob” Wood attacked the City Council for failure to invest in the city’s infrastructure, referencing overflowing sewers and severely damaged city streets. Townsend Van Fleet echoed Wood’s criticism, arguing that the city’s current school-overflow crisis is the result of City Council not prioritizing the schools. But it was when Van Fleet added that the City Council continues to increase the debt that Councilman Justin Wilson threw a green card off the table and initiated one of the night’s first heated discussions.

“The math doesn’t add up here,” said Wilson and pointed back at Wood and Van Fleet’s fight against Carr’s Indigo Hotel project and EYA’s plans for Robinson Terminals North and South. “They oppose economic development and then call us out for not [funding schools and infrastructure]. That debt is being used to finance schools.”

Wood noted that it was Van Fleet, not him, that brought up the issue of debt.

Frank Shafroth, the director for the Center of State and Local Leadership at George Mason University, said that the attacks against the City Council's’ infrastructure plan may not be entirely warranted.

“First, the city has a strong history of financing its infrastructure — most recently having issued long-term debt this year, primarily to fund long-term improvements for buildings, schools, and transportation, as well as to refinance (e.g. lower the city's borrowing costs),” said Shafroth. “Secondly, of course, it is hard to disagree with Councilmember Wilson that they really cannot have it both ways: you cannot attack him for supporting that capital investment and then turn around and accuse Councilmember Wilson and his colleagues of ‘not financing infrastructure needs like sewers and schools.’ All it takes is a stroll down Mt. Vernon [Avenue] ... The key issues were nightly rat counts pouring out of too-often flooded sewers compared to the post-capital investment that has made the Avenue today a different, vibrant part of the city's future.”

Councilman John Chapman noted that the city has made recent strides towards improving the city’s sewer infrastructure and that AlexRenew, a wastewater renewal facility, has expressed an interest in a public-private partnership. Councilman Tim Lovain said that future development in Alexandria needed to focus around metro stations, like the developments at Potomac Yard.

“That’s the future of the D.C. area,” said Lovain. “That’s what employers want.”

But Democratic candidate Willie Bailey said the City Council needs to push further in their negotiations with developers.

“We need to hold developers more accountable,” said Bailey in reference to developer contributions to Alexandria’s funds towards schools, infrastructure, and affordable housing. It was a comment that drew the first friendly fire of the night. Councilman Paul Smedberg, also a Democrat, fired back that the City Council actively courts additional funding towards those programs from developers, and highlighted contributions from the Potomac Yard developers as evidence of that. It wasn’t Smedberg and Bailey’s only quick spat of the evening. Later, Bailey would say that all of the Community Centers in Alexandria should be free to its citizens, but Smedberg shot back that, with a tough budget, those who could afford to attend those facilities should be required to pay.

Bailey wasn’t the only Democrat that said the council needed to go further on developer contributions. When asked if the City Council gives too many exceptions to developers, Chapman answered that they do.

“The pittance we get for affordable housing and infrastructure is not enough for what we give,” said Chapman. “[The developers] need to give a lot more.”

Some of the Republican candidates took Bailey and Chapman’s emphasis on expecting more from developers a few steps further.

“We’ve got to take back our city from the developers,” said Van Fleet. “All of our parking problems in Old Town are developer generated but all we hear about in City Council is parking reductions. It has got to stop.”

Republican candidate Monique Miles recalled a tour of Alexandria’s affordable housing that the late Melvin Miller had taken her on. Miles stated that, with developer contributions, the city needed to begin enforcing it’s 1:1 ratio for public housing lost and gained. Again, Wilson was quick with the green card in response.

“Ms. Miles has misunderstood the entire affordable housing policy,” said Wilson. “The 1:1 ratio is solely for public housing, not affordable housing. I’m sure Melvin [Miller] would have told you that. The units are there, the problem is that the rents have increased.”

But the topic of expectations vs reality in terms of development carried over into other questions. Republican candidate Fernando Torrez commented that, by the end of his first term in City Council, ground would be broken on the new Landmark Mall, a comment that drew a scoff from Democratic Councilwoman Del Pepper.

“The only way you could break ground at Landmark Mall is if you give more incentives to the developers,” said Pepper.

But Independent Phil Cefaratti fired back at Pepper that, during a presentation on Landmark Mall in June of 2015, the Howard Hughes Corporation told the City Council that work would begin on the mall in the first quarter of 2016. But when Cefaratti talked to the company more recently, they said that the estimate for 2016 had not been a realistic one. Cefaratti jumped onto Pepper’s comment at Torrez and asked, if she knew that next year was an unrealistic goal, why she didn’t say anything about that during the June presentation to the City Council? Pepper’s answer was that the situation is still very complicated, particularly because one of the other parties in the negotiation recently changed hands.

“Sears has new leadership, so they had to renegotiate,” said Pepper. “This is not an easy slam dunk.”

Unfortunately, unlike with the debt and infrastructure issue, Shafroth says there’s no clear answer on Landmark Mall and other development questions.

“There can be no certain answer other than time,” said Shafroth. “It would seem clear that after Landmark and some of the development near the transit center on Duke Street that the city has gained much experience and lessons learned. No doubt its leaders are watching how Fairfax County is proceeding in almost building an entire new city — and will have learned from the exceptional foresight with which Arlington shaped its future along the Metro corridor. But as with any future, to do it will will require significant capital investment based upon what Moody's has called Alexandria's ‘dynamic tax base.’ Not to leverage that dynamic base would squander much of the city's opportunity for the future.”