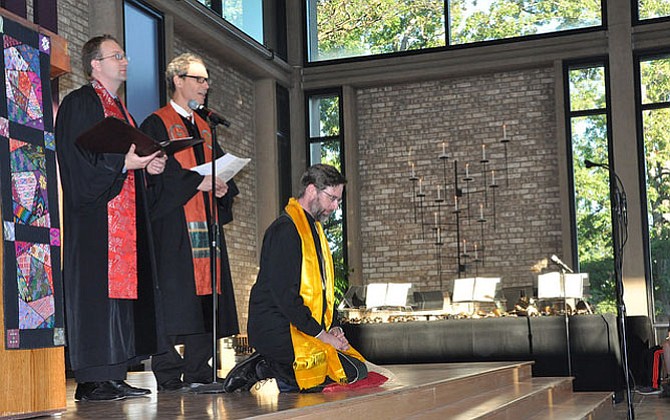 The Rev. Aaron B. McEmrys was installed as senior minister of Unitarian Universalist Church of Arlington on Oct. 11. Photo Contributed

The Rev. Aaron B. McEmrys was officially installed as the senior minister of Unitarian Universalist Church of Arlington (UUCA) on Sunday, Oct. 11. The theme of his installation was A Church Without Walls.

"A Church Without Walls is largely about having the courage to change," McEmrys said. "We do it by embracing difference instead of fearing it. It's about being brave enough to enter into relationships powerful enough to transform us."

More than 20 ministers from the Washington D.C. region and from around the country joined the ceremony.

McEmrys was named senior minister in August of 2014 after a two-year search. Before joining UUCA, he served as senior minister for the Unitarian Society of Santa Barbara, Calif.

He comes from a community organizing background. Prior to entering the ministry, he advocated for workers’ rights as an organizer and labor representative for AFSCME in Oregon, was a council representative to the AFL-CIO, and worked as a grass-roots activist for the Oregon State Public Interest Group. He was ordained at the First Unitarian Society of Denver in 2007.