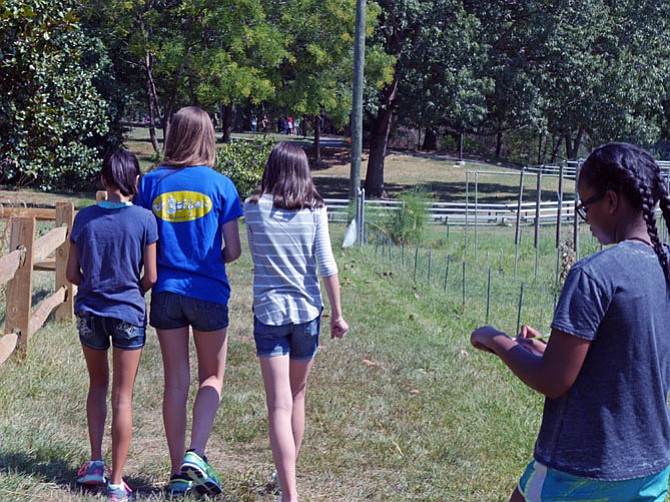 It is a Friday afternoon and the sixth grade watermelon social has just ended. Eighth grade world geography classes are learning all of the things that should be on a map. Tom Weber, 25-year world geography teacher at TJ has just asked his class section what is T (title); what is L (legend). “Walk from the cone and count the steps. Use symbols in your legend and mark down landmarks such as that trash can, a really, really big tree, or this trail — the more detail the better.” In a couple of weeks they will move on to their first big global project, the world of water. Photo by Shirley Ruhe/The Connection 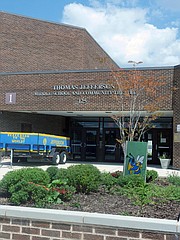 Thomas Jefferson Middle School at 125 S. Glebe Road is housed in a building that also serves as a community center with the second largest gymnasium in the state and a theatre that can hold 715 people.

Multi-colored flags from around the world line the hallways, and a map of the world covers one wall in the main office at Thomas Jefferson International Baccalaureate World School at 125 South Glebe Road. The office is bustling with activity as new teachers report in a few days before school starts.

Keisha Boggan, principal of Thomas Jefferson sids, "Our approach is to instill critical thinking, strong communications, how the students fit into a global community."

Every student is required to have 50 hours of a second language every year. It is not credit bearing with the sixth graders but is required to get the International Baccalaureate (IB). The global approach is worked into the curriculum. For instance, last year, "the eighth grade had a water project focusing on sustainability, shortages of water in different parts of the world, how we can support and help," she said. 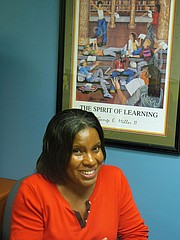 "Any student who walks through the doors of our neighborhood school is automatically part of the program," she said. In addition, since TJ not at capacity, it can currently accept students from outside the neighborhood. TJ has English and Spanish students but quite a few are Arabic and Amharic. The newsletter is sent out in six different languages, and parent-teacher conferences are student-led with the student translating the conversation between teacher and parents.

"We are teaching critical-thinking skills, problem-based learning, less of the sage on the stage and more of the guide on the side," Boggan said. A big piece is also focused on the learner profile: how to be caring, knowledgeable, thinking, inquiring and open-minded. Another component of the curriculum is a community service requirement. In today's world Boggan points out that learning is approached differently as more is known about how the brain functions. She added, "In the last 20 years things have changed more than in previous years although in some ways students are the same and some of the structural things like the calendar are the same. But even though students are the same, the world around them is changing at such a rapid pace, they may have more stresses.” Boggan says the students need to be tech savvy because of the world they have inherited: "Information is given more emphasis, and information is expected to be part of decision making. In previous years students weren't allowed to make decisions but today they are expected to. At the end of the day they are still kids."

Thomas Jefferson is the only middle school in Arlington County that is an International Baccalaureate school integrating the global perspective in the core subjects and requiring 50 hours of a second language every year.

She says she has 17 new teachers this year and some have had experience with IB. There are different levels of teacher training to integrate the global perspective into the core subjects but "most folks won't have had it and some of the teachers were at TJ before it was an IB school. We have to acclimate them and we have an IB coordinator. The teachers are expected to acquire the training but it doesn't happen overnight." She says IB has its own language. While the school adheres to the district requirements for grading, they use IB criteria for assessing.

Boggan is beginning her fourth year as principal at Thomas Jefferson. Previously she had been principal at Alexandria's Francis C. Hammond since 2009 and prior to that she had been principal of George Washington Middle School since 2006. She had been with Alexandria Public Schools since 1996 and was named Alexandria’s Principal of the Year in 2011. She says she has a vision for the school, that data tells much of what one needs to know. And a lot depends on the superintendent and his vision, meeting the requirements and the needs of the school system and the No Child Left Behind requirements. She believes "you can do this in isolation but if we do it as a community, it is better. We are all trying to close the achievement gap."

The building that houses Thomas Jefferson also serves as a community center with the second largest gymnasium in the state and a theatre that can hold 715 people.

"We are family- and community-oriented.” Boggan said. The pride of the school is a community garden "which you have to see when it is in tip top shape." Teachers can use it as an outdoor classroom, and "you can eat from the garden. There is a special feeling in our school. You have to be there with the energy in the halls to feel it."