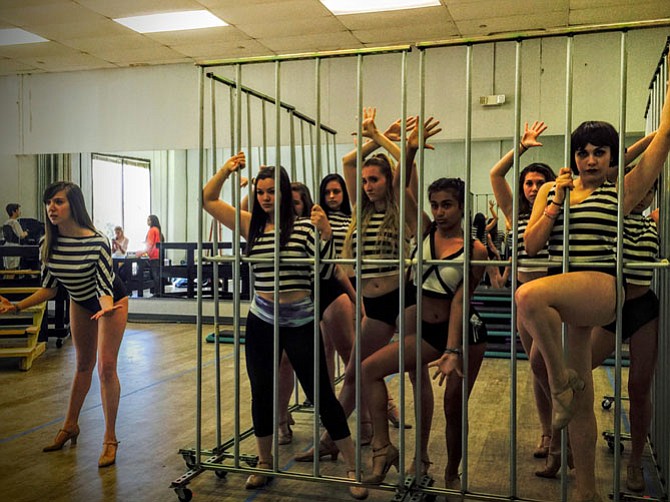 The ladies of the cell block tango. Photo by Ken Moore. 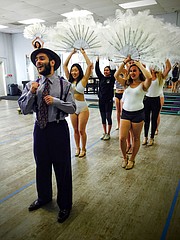 McLean’s Jamie Goodson has performed on a lot of stages. But starting on Thursday, April 14, Goodson's grandparents and parents finally get to see their Langley High School junior perform on her school’s stage.

Langley’s theater students learned Friday, April 1, no joke, that they will showcase the musical “Chicago” on the newly constructed Langley High School stage, part of the overall $68 million renovation of the school.

“We all lost it. Tears of joy, we were so happy,” said Goodson. “Just to open the new theater with this awesome show is going to be so much fun. We couldn’t be happier; the stage is huge, we can fit this show.”

More students and people from the community will get to see the show, said junior Camila Maric, than if it was performed at The Langley School, a private school nearby, which had accommodated Langley’s performances during the renovations.

“You don’t know how many times people have come up to me and said, ‘I was going to see the show but Langley doesn’t have an auditorium. Where is it going to be?’” Said Maric.

“We thought we were going to perform at ‘Little Langley’ again,” said Follin. “It’s really exciting because we get to be the first to use the new auditorium.”

Mark Bosset is in his first year at Langley, but he still felt the excitement of his friends in the theater department who have performed productions the last few years at The Langley School and McLean Bible Church while rehearsing everywhere from the choir classroom at school, the McLean Community Center, Adrenaline Studio and more.

IT’S HER LAST SEMESTER, and Brittany Lund auditioned on “a whim.”

“I didn’t realize how kind of complicated acting was. I have always been into singing and I’ve always been into dancing but acting is a whole different thing that I’m having to explore.I now watch movies in a new way,” said Lund.

And she tried out for one of the lead roles, of Roxie.

Now she says she’s excited that she “got the chance to be involved.”

Follin understands; he first performed at Langley his junior year.

“I’ve been a choir student all four years and I’ve always loved being on stage and performing, but that was always more the music aspect,” said Follin.

“I have some friends in the theater department and I always saw them acting,” he said. “I’ve been to a few of their shows, and I thought, ‘That looks like a lot of fun. So junior year, I tried it and loved it, and I was like, ‘Man, I got involved too late.’”

THIS SPRING, the cast of “Chicago” has rehearsed in the Langley Choir room, the McLean Community Center, the Adrenaline Dance Studios.

Often times, they have to change locations day to day.

They’ve had to design and build sets in parking lots.

“Having a place that’s devoted for rehearsals makes a big difference,” said Follin. “We’re here rehearsing in a dance studio so we actually haven’t rehearsed on stage at all so we have no idea what’s it going to be like. We just have to get on stage and adapt.”

Maric said it is the first time they will perform with a full pit orchestra.

During renovations, performances have been with a sound track; in rehearsals this year, they’ve even brought in a karaoke machine.

“It’s a lot more authentic, and it frees up a lot of what you can do with the music,” said Follin, “Instead of having to adjust the way you’re singing and dancing to a set time, you can work with a conductor and they’ll watch you and you can do things live that you wouldn’t be able to do with a recording.”

Theron Masters, a senior, plans to attend the University of Michigan to study piano performance. He will play the piano during the show. 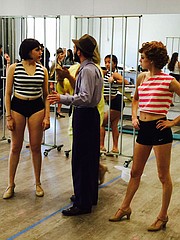 “I like this kind of stuff,” he said. “Getting the notes down by myself is easy, but putting it together with other people is the challenge.”

He has two conductors, the pit conductor and the actors on stage. “As a musician, our job is to help the performers on stage sound good.”

Goodson likes the enormity of the production of “Chicago.”

“I think I’m more of a musical girl, I really like to sing and dance,” she said. “Literally, the whole theater department is involved in this show.”

The duet featuring her and Lund is just one highlight of the show.

“She has such an amazing voice and she’s so talented that it’s intimidating. But she’s been helping me a lot and encouraging me to do my best,” said Lund.

Goodson gave credit to her teachers.

“They handed us the golden egg here and paved the way for us to have a good show,” she said. “I think it has a really awesome message with what is going on with politics right now.”

The show is set in Chicago during the 1920s.