How to get out and enjoy spring beauties. 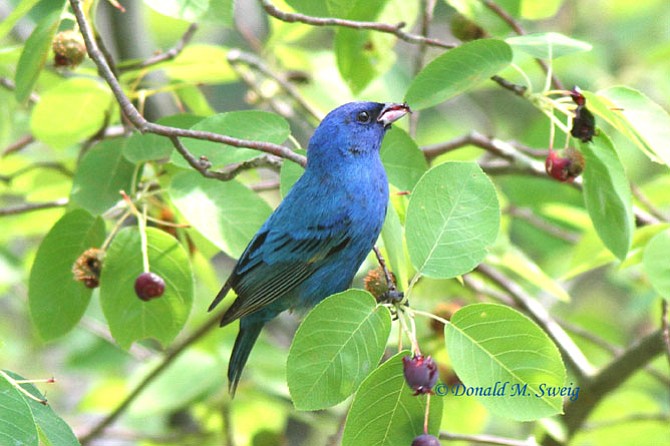 Bright-blue Indigo buntings can be seen in both National Parks at Great Falls.

Bright-orange, male Baltimore orioles nest in and are often easy to see in both National Parks at Great Falls.

Orchard orioles, slightly smaller and less bright than the Baltimore orioles, are common nesters in both Great Falls National Parks.

If you want some help, or companionship, finding the birds, there is a free bird walk at 8 a.m. every Sunday morning in the Great Falls National Park on the Virginia side. Meet in the very front part of the first parking lot or by the visitor center.

The wooded areas in both of the two national parks at the Great Falls of the Potomac provide ample and often easy opportunities to see and enjoy the colorful plumage and exuberant songs of the returning Spring migrant birds. Many species of birds breed in the lush woodlands along the Potomac. In addition to the local breeders such as cardinals, titmice, chickadees, and woodpeckers, the woods at Great Falls host returning orioles, tanagers, cuckoos, warblers, flycatchers, robins and more.

On the Maryland side, the Chesapeake and Ohio Canal National Historical Park, and in Virginia the Great Falls National Park offer easy access to seeing and enjoying these avian nesters. (There is an entrance fee for both parks.) If you have binoculars, be sure to take them along when looking for the birds.

In both parks there are numerous, colorful, nesting Baltimore orioles. Look for the male's bright-orange bodies, with black heads and wings. Listen for their lyrical song particularly in the sycamores along the river. On the Maryland side, they often nest in the sycamores in front of the restroom area, and in the trees between the towpath and the river. A good time to see them there is to go in the late afternoon, when the sun is shining from the west, cross the little footbridge to the canal towpath, turn right and walk about 50-75 feet, and look back at the trees on the other side of the canal. One may also see them frequently flying back and forth across the canal.

ON THE VIRGINIA SIDE, drive to the end of the second large parking lot in the park. The Baltimore orioles often nest in the trees around the parking lots and fly back and forth. Also, try taking the little entrance trail over to the River Trail, and walk left upriver; orioles nest in those trees. On both sides of the river, you will also find the slightly smaller Orchard oriole with his rufous/chestnut colored body, black wings and hood, nesting in the same areas. Listen for his brighter, more rapid song.

On both sides, and in the same areas, one may also hear the louder and somewhat longer song of the warbling Vireo. These light-brownish little birds, with a white stripe above the eye, are often hard to see, especially when there are leaves on the trees. There are also nesting red-eyed Vireos, yellow-throated Vireos, and, occasionally, white-eyed Vireos nesting in both parks.

If you are lucky, you might also see a stunningly bright red bird with black wings, usually high in the trees. This is a male scarlet Tanager. Scarlet Tanagers have a call much like a robin's, but with a kind of raspy, hoarse tone, like it has sore throat. On the Virginia side, Tanagers often nest and sing/call along the Carriage Trail. On the Maryland side, you might see them in the trees around the parking lot or in front of the restrooms.

Look also for the colorful, bright-blue indigo buntings. On the Virginia side they are easiest seen at the upriver end of the River Trail, just before the dam, or at the other end of the park, in the old quarry.

In Maryland, you can look for them in the trees in and around the parking lot in front of the rest rooms, and up and down the canal towpath. (A special treat on the Maryland side, in late May and early June, look for both orioles and for indigo buntings eating the berries of the serviceberry plants in the public area. Don't get too close, you'll scare them off.).

An additional treat, although much harder to find, are the numerous yellow-billed cuckoos, that nest in both parks. Cuckoos have white fronts, brown heads and backs, and long tails with spots on the bottom side. They tend to sit upright in the trees. Their call is a subdued, dry, sort of "cluck cluck." On the Virginia side look for them in the trees and flying back-and-forth across the final parking lot, and along the River Trail, in that area. On the Maryland side, look for them in the parking lot area and anywhere up and down the canal towpath.

The public areas of both parks also feature numerous great-crested flycatchers in the trees. Look for their yellow bellies, dark brown heads, and lighter brown tails. They have a noisy and distinctive call.

Several species of returning wood warblers nest in one or both parks: Louisiana Waterthrushes nest in both parks; you might also find Prothonotary warbler, worm-eating warbler, or yellow-throated warbler. During migration (late April to late May), many more species of colorful warblers pass through enroute to the north.

Conn Island, in the middle of the river just above the dam, has a large colony of nesting great-blue herons, and double-crested cormorants. You will see both birds flying in and out of the nesting areas there. If you walk up the River Trail on the Maryland side, you can get a good look at these nesting birds, and, as always at Great Falls, keep your eye in the sky because you're likely to see a bald eagle or two.

THE NESTING SONGBIRDS are best seen in May and very early June, and as always, early in the morning or in the very late afternoon. If you want some help, or companionship, finding the birds, there is a free bird walk at 8 a.m. every Sunday morning in the Great Falls National Park on the Virginia side. It meets in the very front part of the first parking lot or by the visitor center.

For a quick reference as to what birds look and sound like, go to https://www.allaboutbirds.org/guide/search (it's The Cornell University department of ornithology.) Put the name of the bird that you're looking for in the little search window at the top and that you should get a picture of that bird, and also a way to listen to the bird's call.

Spring is always a wonderful time of year and it's even more fun looking at, and the listening to, the nesting songbirds in the two wonderful national parks at Great Falls. Go have a look ! You'll be glad you did.