A pledge for city’s elected and appointed officials. 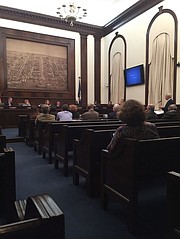 The ethics pledge makes no changes to the law, increases no reporting qualifications, and includes no complaint process, but after months of City Council fights over its necessity and implications, the draft presented by the Code of Conduct Review Committee at the April 12 City Council meeting was received with relatively little fanfare.

The pledge asks that the mayor, members of the City Council, and all appointed officials act with integrity and without improper use or influence of the office. It asks that members of the council avoid even the appearance of a conflict of interest, to behave in a manner that inspires public confidence, to uphold both the letter and the spirit of the law, and to treat others with professionalism, courtesy, and respect.

The pledge itself is fairly straightforward, but it comes with a series of additional obligations.

“We looked for ways of fostering a culture of ethics in Alexandria,” said George Foote, chair of the committee. “If all we did [was write] a couple pieces of paper, we wouldn’t have done very much. We ask of our members of council to spend time each year talking about ethical principles of your choice and at a time of your choosing. We also ask, once a year at an open meeting, that the subject of ethics is addressed.”

A preliminary discussion of the code raised some objections from Vice Mayor Justin Wilson and others over the necessity of all board and commission members to adopt the pledge, but the discussion was tame compared to earlier in the year.

“I do have some pause about applying this to all of the boards and commissions,” said Wilson. “Those are volunteer positions… and I don’t want to create something folks are going to bang people over the head illegitimately for.”

The ethics pledge was one of the centerpieces of Mayor Allison Silberberg’s 2015 mayoral campaign, but faced opposition from other members of City Council who expressed concerns that the concept could evolve into a House of Un-Alexandrian Affairs Committee. The new code of conduct pledge still needs to be reviewed by City Attorney James Banks and will be subject to public hearing.