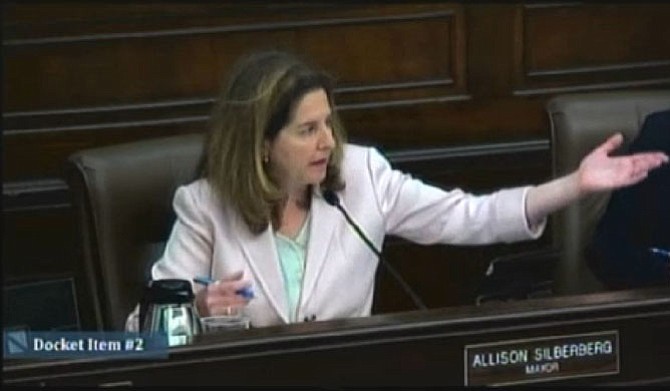 One month into her term as mayor, Allison Silberberg got the process started on enacting a new set of ethics reforms. At its Jan. 28 meeting, the City Council voted to approve an Ad Hoc Study Group to examine ethics reform. It’s the first legislative step forward on an issue Silberberg had put forward as a centerpiece of her election last year. But on the rest of the council, feelings toward the new committee were a little more tepid, some even drawing parallels between Silberberg’s ethics reform and McCarthyism.

Even before she was officially sworn in, Silberberg had begun circulating her proposal for a “Transparency Study Group.” The group would look into the possibility of an ethics pledge, areas of focus regarding ethics, and at the structures and duties of a future ethics advisory commission.

The item was not formally on the agenda, but public citizens had organized to speak in favor of propositions from Silberberg. Some of the speakers were new faces, but the majority were familiar faces in City Hall, particularly for their vocal opposition to the city’s waterfront redevelopment. While council members usually wait until the end of the public comment session to respond to conversation topics raised, the meeting was notable for an unusually large back and forth between council members and the public. Mostly, the public citizens advocated for the sweeping ethics reform propositions informally proposed by the mayor, while members of the City Council defended their ethics reform background and urged greater caution. At the end of the public discussion, Vice Mayor Justin Wilson transitioned the discussion into a more formal vote of approval of a group to study an ethics commission.

The new committee, known as the Ad Hoc Code of Conduct Review Committee, would be tasked with examining the feasibility and usefulness of a commission on ethics. The committee will consist of nine members, seven of whom are appointed by members of City Council.The other two would be appointed by the city manager and would have experience in improving government transparency, accountability, and ethics. Nominees may not be officers of a political party, elected officials, current members planning commission, board of architectural review, or board of zoning appeals, contractors with the city, city staff , or a person or private entity with a current or pending application contract, proposal or procurement bid for official action by the City of Alexandria.

But while the idea was to use the ad hoc committee to look at what kind of ethics commission would be necessary or useful, some of the framework and limitations on the potential commission were already being set and debated between the council members and the public.

Members of the public argued that, if the goal was to promote transparency and openness in the government, having commission members be primarily appointed by members of the City Council was a misstep. Jack Sullivan, an Alexandria resident, was among the group advocating for a different appointment system.

“I understand an alternative proposal to have each council person appoint [people] to an ethics review committee,” said Sullivan, “but as they say down state, that dog won’t hunt.”

However, members of the council refuted the idea of bias in their selection of commissioners.

“Every month, we’re asked to pick no less than five or 10 boards and commissioners based off of conversations with people, based off of resumes, their qualifications,” said City Council member John Chapman. “I would assume nothing less would be done here.”

But beneath the legislative differences is a core concern by many that a Commission on Ethics is just vague enough to be turned into a commission on rumors and gossip. Lovain laid out much of the opposition’s concerns about the potential commission.

“I have deep concerns about the possibility of a standing commission,” said Councilman Tim Lovain. “I don’t think it would be too much of an exaggeration to say, at its worst, we could have ourselves a Committee on Un-Alexandrian Activities, where a series of ethical complaints would be filed. We have a lot of people who are very passionate about the issues that come before City Council and they’re very upset when they’re on the losing end of a vote, and they’re sure that if a decision was made on the merits that they would have won. So they’re often convinced there was some kind of funny business if they lost. So even if we had the best group in the world and they said ‘no, that’s not valid,’ you would still have ethics complaints that have been filed. You have a real possibility of people’s reputations being dragged through the mud. Insinuations being made, that where there’s smoke there’s fire. Ethics initiative that we’re taking should help strengthen people’s faith in government and reassure them that standards have been upheld, but I think there’s grave danger of it going in the opposite direction, that it would reduce people’s faith in government. I’m so concerned. I think it’s inherent in the structure of a standing committee.

I fear for this. I don’t think there’s any way I can think of to guard against these problems.”

David Jonas, policy director for Gov. Terry McAuliffe’s state-level Integrity Commission, said that he regularly hears concerns about witch hunts and politicization, but said the alternative of corruption as in the former-Governor Bob McDonnell case, was far worse. And while Jonas acknowledged that there were risks, the good outweighed the bad.

But there was a lot of rapid-fire back and forth between Wilson, Jonas, and others surrounding the extent of an ethics commission’s scope. Wilson quoted an earlier statement from Jonas in which Jonas had said that the horror stories from ethics commissions come from municipal and city ethics commissions.

Supporters differed on whether or not an ethics commission should take complaints from residents. Silberberg’s draft proposal doesn’t mention a specific stance on the question, but some proponents argued that the commission should allow citizens to hold officials accountable. Others, like Gil Hersch, a new Alexandria resident with experience working on ethics commissions in Israel, and Jonas answered that the commission should be voluntary and established to provide advice to city officials, but Wilson countered that this idea of an ethics commission was already in place, it was Jonas’ own state-level Integrity Commission, part of which assisted local and municipal administrators. When Jonas said that a local commission would help for faster turnaround, Wilson noted that he had filed a question to the state level commission and heard back within eight hours, which Jonas acknowledged was a swift response.

But for some in Alexandria, the prospect of a witch hunt isn’t a distant fear, but a very real possibility. Amy Shack has served the city in civic associations, as an officer in the civic federation, and on various boards, commissions, and ad hoc committees, and Shack noted that the kind of rumors and gossip Lovain fears an ethics commission might bring already exist.

“As co-chair of the Land Use Committee, I remember being accused of being unduly favoring the applicant because I addressed him as ‘Bud’ rather than ‘Mr. Hart’,” said Shack. “That’s as simple as it can be ... I am greatly concerned about the implications. I know on the Traffic and Parking Board, there were numerous times where I was accused of taking the food out of their children’s mouth, or if I didn’t pass this, I was as good as murdering their child. These are things that fall down on us, where the civility is not quite as good as it is in this chamber.”

Even as a former officer of the organization, Shack expressed misgivings about the Civic Federation selecting members of the ethics commission. Shack says during her time on the federation, she regularly had to call out people within the organization for failing to follow their own bylaws.

“So who is it that is going to judge me?” Shack asked. “I appreciate the idea of rules. God I would love to know ‘here’s where the line in the sand is’ or ‘here’s where I cannot go,’ ‘don’t even think of going there’ when representing my civic association. But who is calling me out and where is their integrity and their ethics?”

Central questions, like whether or not the committee would accept citizen complaints, remain unanswered.

“There is a real blurring of the line in how [people] see this thing moving forward,” said Councilman Paul Smedberg. “It concerns me that no one has clearly articulated what this commission is and what it isn’t. I’m hearing very conflicting views on what people think this is, and that concerns me.”

“You’re right to ask that question,” said Silberberg. “The whole point of this study group is to figure out what it is.”

The City Council unanimously approved the establishment of the ad hoc study group, which will report back to the council on April 12 with its findings, including a draft code of conduct and an ethics pledge.