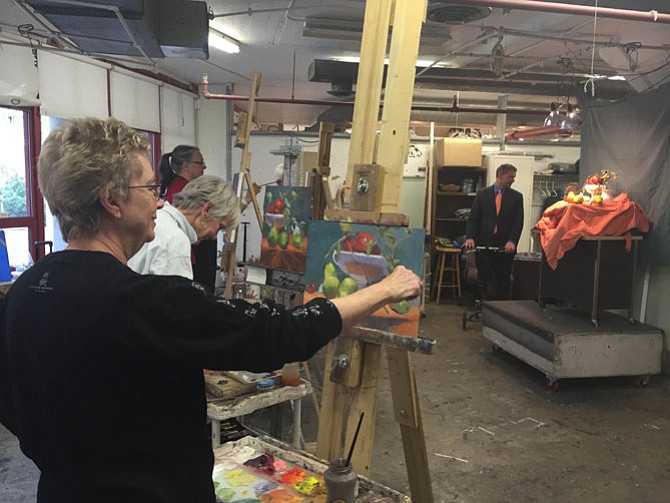 Artists practicing with an Art League program at the Torpedo Factory. Photo by Vernon Miles.

Everyone seems to be in agreement: the Torpedo Factory is one of the star attractions of Old Town Alexandria. But when a report by an independent group found that the current management structure has compromised the site’s financial viability, the city governance and arts community have fractured over questions about the site’s future. Will the Torpedo Factory return to its roots as an artist-run enclave, or will it be swept up by the designs on the Waterfront as an independently managed and commercially successful cultural centerpiece of the new Old Town. 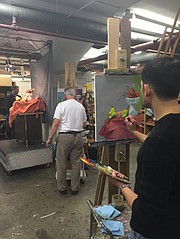 Artists practicing with an Art League program at the Torpedo Factory.

What the report by The Cultural Planning Group (CPG) found was a bureaucratic mess. The Torpedo Factory, for several years, had been alternatively run by the City of Alexandria and by the Torpedo Factory Artists Association (TFAA). However, since 2010, a fusion of the two methods was created: a board composed of members of the TFAA, the Art League, at large members, and members appointed by City Council. At the time, it was hoped that this system would equally represent all parties.

It didn’t work out that way.

“While the nonprofit was launched with good intentions, it has not been successful in achieving its goals due to a cumbersome and complex operating structure,” said the report. “This structure has ultimately created an environment of distrust among the various entities, and there is no ultimate ‘holder’ of the mission and vision of the Torpedo Factory.”

The CPG report claimed that no sound economic strategy could be suggested without first restructuring the entire leadership and management of the Torpedo Factory, ideally into a “single, self-perpetuating operating entity with a governance structure that is independent of the City of Alexandria.”

Despite the Torpedo Factory managing to tread water each year with a net profit ranging from $14,784 to $52,955, the CPG report noted that it does not earn enough to make long-term financial investments, like a cash reserve or building maintenance.

“Bold and dramatic change is necessary to reinvigorate the Torpedo Factory and to create an operating structure that can focus successfully on a future of vitality, relevance, and sustainability,” said the report. “[The current structure] has yielded distinct factions that result in near paralysis in decision making and have made it nearly impossible for the [Torpedo Factory Art Center Board] to focus on long-term planning/strategy and productively approach situations that require consensus. Consensus decision-making is based on cooperation, collaboration, inclusiveness, participation, and seeking agreement — qualities that are not currently strong on the board of directors.”

Since the release of the report, the city, the Torpedo Factory management, and the Artist’s Association have all been working to find a way forward. The Arts Center Board, as well as the Arts Commission, voted to go forward with the recommendations of the CPG report, but Deputy City Manager Emily Baker noted that the city ultimately has to approve changes to the structure of the Torpedo Factory and the vote was far from unanimous.

“Our role is to hear from all the stakeholders and try to find a way forward,” said Baker. “We are helping to support that work and to use the input we’re getting from different stakeholders.”

“Some of the actions require city approval, like streamlining the management,” said Diane Ruggiero, deputy director of the Office of the Arts. “It’s about trying to find a balance. Change is frightening for some folks, I get it, but the city is completely committed to the Torpedo Factory.”

Suzanne Bethel, executive director of the Art League, the largest single tenant of the Torpedo Factory, said that the Torpedo Factory board is still very much in the planning stages of figuring out governance of the building. Even if the city approves the recommendations of the CPG report, questions still remain about how those changes would be implemented.

“It’s going to be all about how this is instituted, how we get from where we are to there,” said Bethel. “That’s going to be where the rubber hits the road. I’ll be curious.”

“My hope is that the Torpedo Factory goes on in the form that it is now,” said Don Viehman, president of the Torpedo Factory Artists’ Association. “My desire is that, whatever the new form of management is, the artists who are in the studios retain some decision-making authority about what happens. It’s a community we built, and it’s the artists who did the work and built the institution.”

If the CPG report recommendations are approved, which specifically reference the artists and management as central to the “culture of dysfunction,” keeping artists at the helm of the Torpedo Factory seems unlikely. But Viehman argued that the findings of the report are built on a faulty premise and poor research.

“In understanding the Torpedo Factory, it’s important to understand that it’s a complex institution,” said Viehman. “That’s one of the problems with the CPG report, that understanding was not really achieved.”

Viehman argued that there’s three layers to understanding the financial sustainability of the Torpedo Factory. The first is that the building is old, and the repair of it was the central piece that kicked off the whole CPG study process, but that’s a capital expense and isn’t really tied to ongoing expenses.

“If viability means capital improvement of the building, there are a number of ways to achieve that,” said Viehman, “but that’s not what most people mean when they think about viability. They think about operating costs, which on a day-to-day basis are currently covered. Nobody is in the red, it’s all in the black, and most of that comes from artists’ rent.”

The third point, and the one Viehman said was not considered in the report, is creative economy.

“People come to the Torpedo Factory and enjoy the space, they use the facilities of the building, but the entrance is free,” said Viehman. They spend their money on parking or food and lunch. We provide the service that entertains them but we don’t necessarily get the economic benefit of that. That’s a broader benefit that we help to provide.”

So why the CPG study? While the Torpedo Factory breaks even on operating costs, Viehman said he believes the city wants to make the site more profitable as the city redevelops the entire area as part of the upcoming Waterfront redevelopment plan.

“The city is looking to make more money off of this building, and that’s something we can all discuss and work towards, but they need to be specific about what they need,” said Viehman.

There’s one area where Viehman agrees with the report, and seemingly with the city: the current structure is not ideal, but Viehman believes improvements can be made without eliminating the entire system.

Currently, a working group is examining the potential implementation of the CPG report’s suggestions.

“The working group is trying to break down some of that distrust and come up with a plan,” said Viehman. “It’s hard work and it’s time consuming, and there are people who would not want [that compromise] to happen.”

Baker said no schedule has been established, but that a recommendation to the city will likely be forthcoming soon.

“It’s a flexible [time frame],” said Ruggiero. “It doesn’t have to change tomorrow, but we also don’t want it to linger.”