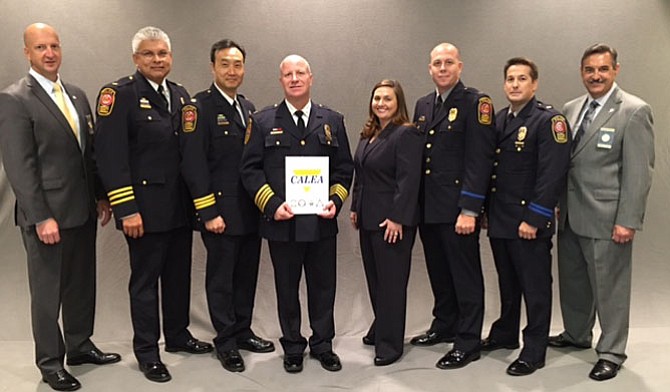 In a hearing in Baltimore’s inner harbor on Saturday, July 30, the Fairfax County Police Department received a formal recognition of its national accreditation from the Gainesville, Va.-based Commission on Accreditation for Law Enforcement Agencies, CALEA.

“It means we’re meeting the best practices in law enforcement, to put it pretty simply,” said Camie King, a civilian who’s worked as a crime and intelligence analyst for FCPD for more than a decade, but most recently King is serving as the accreditation manager.

King’s job since FCPD entered into a self-assessment arrangement with CALEA in October 2014 has been to review the county’s police force policies up against the 484 standards set forth by CALEA based on best practices in law enforcement around the globe.

The standards fall into the categories of: Public safety agency capabilities to maintain law and order; Agency effectiveness and efficiency in the delivery of public safety services; Cooperation and coordination with other public safety agencies, and with other agencies in the criminal justice system, and Citizen and employee confidence in the goals, objectives, policies, and practices of the agency.

When there were gaps, such as adding content to current policy to increase the frequency of in-car video audits, King was responsible for managing the process to shore up policy and practice, and then proving FCPD’s compliance with the standard in a report. Camera’s were phased into most cars between 2013 and 2014.

In April earlier this year, several representatives from CALEA visited Fairfax County for four days for an on-site assessment. Baltimore’s announcement, at a CALEA conference, was the culmination of that review: All the standards were met or exceeded by FCPD in practice.

“For us, we had excellent police to begin with,” she continued, “it was just shoring up, having that room for improvement. We were really able to see a huge benefit for our agency.”

Each year, there will be a less formal electronic review of Fairfax County’s maintenance to the standards by CALEA. They will send assessors onsite every four years, with the next visit coming in April 2020.