Praised by many, Roessler also faced criticism and calls for resignation 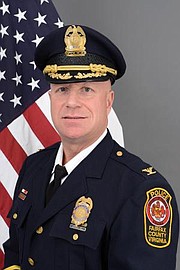 His resignation drew praise from many for his 30-plus years of service to the county through his work in the Fairfax County Police Department.

But the announcement came after police officers say their morale is the lowest it has ever been, and after calls for his resignation from some officers.

“Chief Roessler has dedicated his life to protecting our community for over 30 years, as a new hire, patrol officer, interim chief, and eventually chief for the past 8 years,” said Jeffrey McKay, Chairman of the Fairfax County Board of Supervisors.

“His efforts, along with officers and our community, have made us the safest jurisdiction of our size in the nation. The Chief has worked with the Board on reforms that have solidified the police department as a leader in transparency and community trust.”

“Chief Roessler has dedicated his life to protecting our community for over 30 years.”

—Jeffrey McKay, Chairman of the Fairfax County Board of Supervisors

ROESSLER LED the department to national accreditation through the Commission on Accreditation for Law Enforcement Agencies, while also maintaining state accredited status. The FCPD has been re-accredited by both entities during Chief Roessler’s tenure.

Roessler led the department through outside review of its use of force policies and community review by the independent Ad Hoc Police Practices Review Commission in 2015. Reforms led to enhancing diversity recruitment; increasing transparency; implementation of a body-worn camera program; establishment of a Civilian Review Panel and Independent Police Auditor’s office; and significant modifications to use of force policies, including de-escalation, duty to intervene, prohibition of choke holds, crisis intervention training and diversion programs.

FCPD training now begins with focus on the sanctity of human life.

Chief Roessler formed the Chief’s Diversity Council and partnered with community leaders to help form the Communities of Trust Committee.

During his tenure he prioritized wellness in the community and in the FCPD Roessler worked to advance mental health support and resources in the FCPD. He also welcomed the addition of an officer-driven, post-traumatic K-9 therapy program and he and his wife raised K-9 Indy, who is now in therapy service with the FCPD Peer Team.

“Chief Ed Roessler is one of the greats in the history of the Fairfax County Police Department,” said Braddock Supervisor James Walkinshaw. “His efforts were key in helping make FCPD a national leader in transparency and accountability while maintaining our status as one of the safest large jurisdictions in the country.”

ROESSLER THANKED his staff and county residents and leadership for contributing to the department’s success.

“The FCPD is blessed with women and men, past and present, who understand their noble calling in life and are dedicated to serving and protecting others,” Roessler said. “I’ve worked alongside progressive law enforcement professionals, amazing forward-thinking strategic county leaders and great community advocates who have truly embraced the concepts of One Fairfax to ensure equity for all. Our county leaders, community and its great police department are positioned to continue to serve as a model for the next generation of policing in America.”

Supervisor James Walkinshaw (Braddock) said, “The men and women of the FCPD are some of the best-trained, most committed public servants in our community and the next Chief will have the honor of leading them into the future. That future requires a leader willing to acknowledge the inequities in the law enforcement and criminal justice systems and take bold action – action that will sometimes face political resistance from defenders of the status quo – to address them. I'll be looking for someone with a track record and commitment to doing just that,” Walkinshaw said.

A recent meeting of the Board of Supervisors Public Safety Committee mentioned low morale in the police force.

“I’ve met with hundreds of Fairfax County police officers in recent months, in group settings and individually,” said Public Safety Chairman Rodney Lusk (Lee) at a committee meeting before Roessler’s announced retirement, “and to a person they have told me morale within the police department is the lowest that it has ever been.”

“This is a public safety issue that must be addressed in order to ensure that our officers are performing at the highest level possible, and that we are retaining the highly skilled law enforcement professionals that we have invested so much time and resources in training,” said Lusk.

The Fraternal Order of Police called for Roessler to resign after he condemned the actions of an officer who was charged with three counts of misdemeanor assault and battery after tasing a man in the Mount Vernon District.

“Bolster The Blue,” a self-described conservative grassroots organization, held a press conference with Fairfax County GOP to say that their efforts helped lead to Roessler’s retirement.

Supervisor Pat Herrity said, “I want to start by thanking the Chief for his many years of service to the residents of Fairfax County. It has been a difficult time to serve in law enforcement. As we begin a new chapter in the history of our Police Department, we will need to find a leader that will address the needs of our officers, build on our legacy as a nationally respected and recognized department and keep at the forefront their primary mission — to protect and serve all residents of the county and keep us the safest jurisdiction of our size in the country. There is a lot of work still to be done and I am committed to working with the Board to address the many issues facing our officers and the department.”