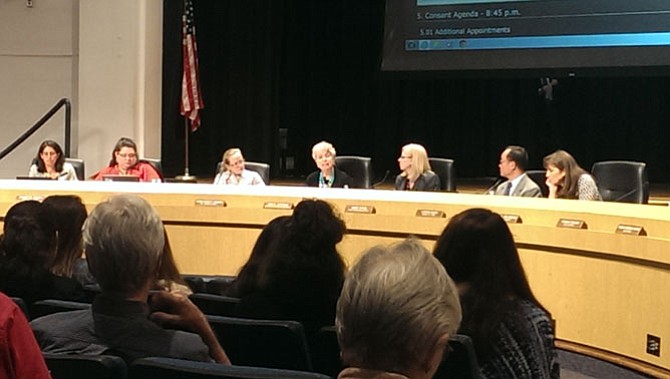 Vice Chair Jane Strauss, center, speaks directly to the students from JEB Stuart High School who attended the School Board meeting July 28 in support of changing their school’s name. Photo by Tim Peterson.

Coming off its recent decision to postpone the implementation of new regulations for transgender students, the Fairfax County School Board has moved action on the possible renaming of J.E.B. Stuart High School in Falls Church to a later date as well.

At its July 28 meeting, the last until school starts again, the board voted in favor of creating a working group that will “further consider community concerns” around re-naming the school.

The current namesake was a Confederate cavalry leader, which has sparked divisive controversy within the student body, alumni and community.

The issue was brought to the school board by a group of concerned students from Stuart who said it was shameful to attend a school named for a figure from the darker side of Virginia and the United States’ past.

Others say Stuart the man is not being given fair respect — that the context, the era, norms and beliefs in which he lived are not being taught at the school, much less considered in whether the name should change or remain the same.

Members of the audience stand to show their support for not changing the name of JEB Stuart High School.

THE SCHOOL BOARD has already done some outreach to gauge the community pulse, including a survey, for which Board Chair Sandy Evans said they received more than 500 responses.

Evans said they’ve looked back to School Board records from 1958, when Stuart was being named. She said not much rationale for the name was found.

“We can’t know what was in their hearts and minds,” Evans said on Thursday night at the meeting. But she said, the current board needs to be “reflective and responsive to all members of our diverse community.”

One motion and then a replacement were offered for the working group. A distinction in the alternative made clear that the working group would not ultimately decide a new name for the school, or even that one should be decided.

While it appeared the first motion presupposed that the working group result in a name change, it prompted Springfield District representative Elizabeth Schultz to comment that would be “the antithesis of what a democracy is.”

Per FCPS, the successful motion directs that, “The working group will weigh the pros and cons of a name change; continue to ensure public engagement and determine the extent of support for change; explore public-private partnerships to finance any name change; examine ways to prevent added burdens on the school’s booster clubs, PTSA, and Stuart school administration; decide the best method for transitioning from an old name to a new one; ensure proper record retention; and set the best timing for such a change, if approved by the board.”

Findings and recommendations from the working group will be due back to the School Board by March 2017.

Some have said the issue is divisive enough, creating the working group will just drive the wedge further.

“No one will walk away comfortable with what we decide tonight,” said At-Large member Ryan McElveen.

He said a difficult task before the board and community is “How to remember the past while honoring and respecting a diverse community.”

Shirley Ginwright is president of the Fairfax County NAACP, which has partnered with the Stuart student group for changing the school’s name.

AFTER THE DECISION by the board, she said the two groups have conducted and presented the board with extensive research, including that Stuart served for the Union army before he went to the Confederacy. “JEB Stuart was a traitor,” Ginwright said. “Is that who we honor?”

2012 Stuart graduate Nicholas Pisciotta was among alumni and opponents to changing the name who attended the meeting.

Pisciotta said the name change has already and will continue to be a “distraction from the real needs of the school.”

Rather than put special effort into finding money that would be required to update school grounds, team uniforms, in the event of a name change, Pisciotta and others say that special effort could be better spent raising money for other uses around Stuart.

The board didn’t specify the size of the working group, nor when it will be created.