School Board to take action Dec. 17 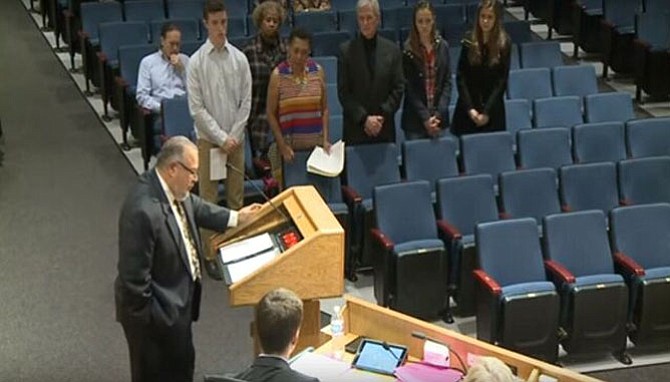 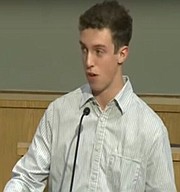 Whitten Rutledge, a senior at Stuart, explains why he and the group Students for Change believe his high school’s name should be changed from J.E.B. Stuart.

“The culture around the school is a wonderful one,” he said, addressing the Fairfax County School Board on Dec. 3, “we believe the name should reflect the culture we have.”

Rutledge was speaking on behalf of Students for Change, a group at the Falls Church school that’s upset with the institution being named after a Civil War cavalry leader for the Confederate army.

“Change is necessary,” Rutledge continued. “In order for our school to embrace its own culture, we need a symbol that accurately represents who we are, not a confederate general who stood adamantly for the segregation of society.”

Stuart seniors Anna Rowan, Cassie Marcotty, Marley Finley, Abby Conde and Lidia Amanuel founded Students for Change and were recognized by the Fairfax County NAACP for their work to have the school’s name changed to honor Thurgood Marshall.

“The momentum we need for change is happening everywhere,” Rutledge said, referencing over 34,000 signatures his group has obtained in support of changing the name.

Under the current policy (8170.5), new names for schools are only allowed at new buildings or buildings that have been repurposed. Since being adopted first in 1987, the policy has only been corrected or revised three times.

As part of its new business on Dec. 3, the School Board scheduled a decision for changing the policy. On Dec. 17, the board will vote on adding the sentence “The School Board may also consider a change in the name of a school or facility where some other compelling need exists,” to the naming guidelines, which would essentially open the door for a formal pitch to change Stuart’s name.

“I believe the time to do the right thing is now,” said Henderson. “Renaming the school for a giant of American jurisprudence, who lived in this very community, championed Brown v. Board of Education and began a policy to dismantle segregation and open this country up to equality. If you truly honor diversity, the choice couldn’t be clearer: Rename J.E.B. Stuart High School to Thurgood Marshall High School.”

Fairfax County NAACP president Shirley Ginwright spoke next, comparing Stuart the man to abolitionist John Brown, who fought to free slaves and was sentenced to death by hanging.

“As an African American,” Ginwright continued, “it is painful to be constantly reminded of the trials and tribulations of our forefathers and what they had to endure. It is hard to have our children faced with the same pain in feeling there’s nothing they can do about it because of policies and institutionalized behaviors that have been supported by racism and discrimination. It is time for us as a community to correct the wrongs that have been imposed by those who have previously held these positions. It is not a matter of rewriting history, but telling history as it happened, all of the history.”

The board is scheduled to vote on the policy change at its Dec. 17 meeting, at Luther Jackson Middle School, 3020 Gallows Road in Falls Church. For more information about participating at meetings, visit www.fcps.edu/schlbd/meetings/requestspeak.shtml.