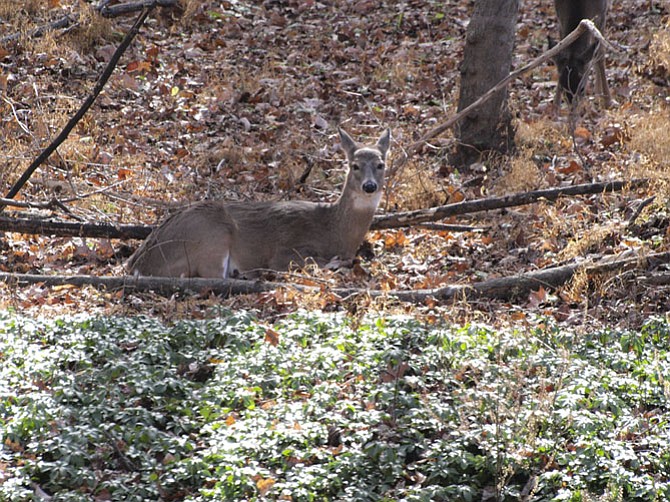 A deer resting in the woods. Connection file photo

With an ecosystem struggling to support a deer population several times what’s considered to be healthy for a habitat, Fairfax County is preparing once again to initiate its deer management program.

The county held two information meetings about the program, the latter of which was held at the Mount Vernon District Station on Aug. 16.

In addition to the pressure on the ecosystem, overabundant deer also pose hazards in the form of increased collisions with vehicles and the spread of diseases.

This year, the program begins Sept. 10 and runs through Feb. 25, 2017, in parks and other locations throughout Fairfax County with oversight from the Fairfax County Police Department and in collaboration with Fairfax County Park Authority and Northern Virginia Regional Parks.

Notable change for 2017: The Sully Woodlands area managed shotgun hunts will not take place as parts including Elklick Preserve and Rock Hill District Park are being converted for use by the archery program.

Sharpshooting at night will be executed by FCPD officers in select parks, while they’re closed to the public.

Bob Flanagan of Fairfax Station attended the Aug. 16 meeting. Flanagan is a hunter himself and has been a group hunt leader for the county’s deer management program for at least the last five years. His group covers a park area in Vienna.

“Most of the people we encounter there are happy to see us,” Flanagan said. “But it depends on the park, the location, extent of the deer problem in a location, or the philosophy of the person.”

Flanagan is also a representative for Suburban Whitetail Management, an organization that’s been providing free deer management services in Fairfax County since 1997.

“I was encouraged with the number of people who spoke up,” at the meeting, said Flanagan, “concerned, and disappointed with number of deer on their property.”

Though Flanagan said he was generally positive on the evening’s presentation, he thinks there should be more discussion of “management across the landscape.” In other words: When hunters work in parks, that also pushes deer from the parks and into communities. He thinks there could be more done to address that complication.

In addition, Flanagan said “ears perked up” when he asked about reversing the degradation of woodlands and ecosystem as a result of deer overabundance as well as development.

“That’s a major problem I don’t think the community recognizes,” he said. “When I’m out there I see hardly any regeneration.”