Oh Deer! What Can the Matter Be?
Votes

Oh Deer! What Can the Matter Be? 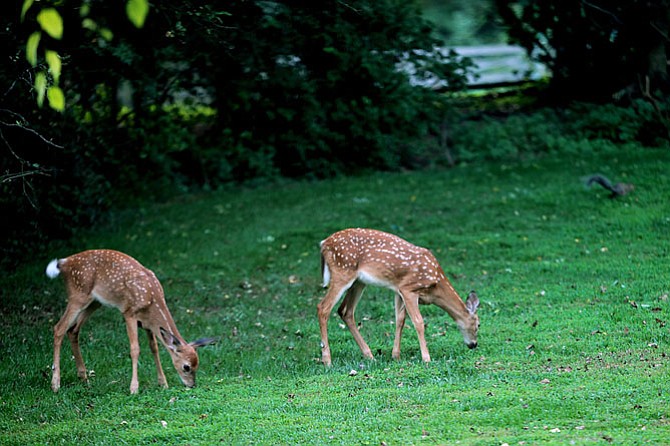 One reason the deer population is out of control is that most does give birth to twins, and sometimes triplets, every year from the time they are one year of age for as many as 10 years. This pair was photographed in Great Falls in the Spring. Photo by Joan Brady Photography

The county Park Authority used aerial infrared surveys via fixed-wing airplanes to count the number of deer inside parks and within a small distance in the surrounding neighborhoods on Feb. 6, 2014 and Dec. 27, 2013, according to the 2014 Annual Report on the Environment for Fairfax County. To get the estimated population densities, authorities divided the counts by the number of square miles surveyed.

Deer management methods at the parks have included archery, sharpshooting, and management hunting, occasionally in combination.

“While many of the data are limited, taken collectively, the observations of professional park staff, poor health of evaluated deer and high deer densities indicate that deer are overabundant and are negatively impacting the ecology of sizeable areas of Fairfax County,” according to the report.

First in an occasional series on deer and deer management.

Joan Brady added to the tally of deer-vehicle collisions a few days after she received notice of the Great Falls Citizens Association's deer survey results.

"I don't think I've even hit a squirrel before," the Great Falls resident said. "It was awful to see it coming and to know I wasn't going to be able to do anything to stop in time."

Deer-vehicle collisions are almost commonplace; an average of 4,000 to 5,000 Fairfax County residents hit a deer with their vehicle each year.

Nobody stopped to see if Brady or the deer was all right, she said, although many responded to her message on social media that night.

"I just hit a deer, and it sucked," Brady wrote on Facebook.

Brady didn’t weigh in on deer management problems and solutions, but she didn’t like her role. "There's got to be a better way to kill the deer than the car," Brady said the next day. "I'm just hopeful I didn't kill him."

Great Falls and McLean, with large lots and many parks, can be seen as the bullseye in the exploding deer population and the debate on what to do about it. Before the beginning of a county program to “manage” the deer population in parks, Riverbend Park in Great Falls had a deer population estimated at 213 deer per square mile, more than 10 times what is considered healthy.

Deer management, by way of sharpshooting and bowhunting, which began in 1999 in Riverbend, has helped reduce the deer density to 32 per square mile. Nearby in Scotts Run Nature Preserve in McLean, that number is 40.

DEER DENSITY is still at least two times greater than it should be in the Great Falls/McLean area, said Fairfax County Wildlife Biologist Dr. Katherine Edwards, citing a number between 15-20 deer per square mile as healthy for deer and the environment. Fairfax County recently used aerial and infrared technology to study deer population in county parks, she said, including Scotts Run Nature Preserve, Riverbend and other parks around the county.

At those densities, 4,000-plus deer-vehicle collisions a year are only part of the problem in Fairfax County. Lyme disease, agricultural damage and damage to suburban landscaping are rampant. Deer also damage the environment and other species by decimating the understory in the forests. Young trees can’t grow up to replace older trees. Birds and other species that need cover decline because of lost habitat.

The county began the deer management program in 1998, and while there was considerable negative public response to archery hunting and other methods at first, a lot of concerns have died down, said Dranesville Supervisor John Foust, who represents Great Falls, McLean and Herndon.

“We initially had a lot of concerns about deer management when we started in the parks,” said Foust. “There is some opposition, but not really as much as there used to be. … We run a very very tight ship. Our hunters are very well monitored.”

While the management efforts in the parks have reduced the number of deer, (the FY2014 “harvest yield” was 848 deer from 27 park sites) many believe that it’s not enough. Most of the deer habitat is private property, and deer management will need to move onto private property to be effective, they argue.

“I've accepted we've got to do more,” Foust said. “I think we will get the same results on private property because the hunters have conducted themselves with professionalism.”

THE GREAT FALLS Citizens Association recently took the unusual step of surveying its residents about experiences with deer and opinions of what to do about it.

Part of the mission of the Great Falls Citizens Association is to preserve the semi-­rural nature of Great Falls. The Committee on Environment Parks and Trails, “observed that the next generation of our forests has in many places disappeared under pressure from deer herds, raising questions about the sustainability of our highly-­prized natural environment. … The objective was to seek residents’ views so that the GFCA could evaluate support for new initiatives to protect local woodlands and streams.”

Jerry Peters, a retired ecologist who lives in Great Falls, is spearheading a program in Great Falls to connect licensed, professional archers to homeowners who permit archery on their land.

"This is really deer heaven, and we have made it that way,” said Peters. “We took away their predators." Deer used to be hunted in Virginia by bobcats, black bears, eastern gray wolves and eastern mountain lions.

For the past seven years, Peters has studied the deer grazing the understory of forests, the overabundance of deer in the Great Falls and Northern Virginia area, and the declining deer health because of the inability for the habitat to support the growing population.

A 125-pound deer requires approximately 6.5 pounds of forage per day, or some 2,370 pounds of vegetation per year, according to the Fairfax County Park Authority. Multiply more than a ton of vegetation by as many as 100 deer per square mile, and the resulting decimation of forest understory and suburban landscaping is not surprising.

"That's not the legacy we want to leave behind."

About 95 percent of respondents to the Great Falls Citizens Association’s Deer Survey have seen deer feeding on their property; 45 percent see deer multiple times each day in their yard and 27 percent more see deer daily on their land.

"The car is the only predator and that's not very humane to the deer," said Canis.

The citizens association is studying and learning all sorts of options to educate Great Falls residents, said Canis. "Hunting is an effective way to control the herd."

HOMEOWNERS OF any size property in Fairfax County can give permission to hunt to qualified, licensed archery hunters. Archery hunting is permitted from the last Saturday in September through the last Saturday in March. The county encourages homeowners to notify their neighbors “as a courtesy,” but that is not required.

"One of the first things that stuck out was the number of deer. ... There were too many deer for the habitat to support. I was energized to do something about it," he said.

Allison, an archer, grew up in Pennsylvania. His father hunted, his grandfather hunted, they hunted all together. The school system gave students a day off on the first day of deer hunting season.

Allison was surprised at first by anti-hunting sentiment, even at home. "My wife doesn't understand how I can kill them," he said.

"I love watching deer. I love seeing deer in my yard, but I want the habitat to support the deer. When I see deer coming up to the flowers right by the front door, I know they are starving."

The impact on shrinking understory in the woods and forest impacts more than pretty views, said Allison; it impacts birds and migratory patterns of birds as well as other wildlife.

Archery season is an effective way to reduce the herds, he said.

And archery is safe, according to Peters, Allison, and all data kept by Fairfax County, the state, and the state of Maryland.

No injuries have occurred to non-hunters because of bow-hunting, according to Fairfax and Montgomery counties. There are occasional injuries to bow hunters who fall from deer stands.

Allison is gathering archers, and Peters is working to set up a database to track deer throughout Great Falls where landowners can add data, and a database that permits archers to know which landowners permit hunting on their properties.

"I'm going to set up a pilot program. ... It's been an obsession. It's almost like an intellectual puzzle," said Peters. "It's not about hunting and killing deer. I've come to really enjoy the challenge."

Christine Sullivan of Great Falls has made use of Green Fire’s services.

“Seeing deer was nice initially, but then I noticed that all the foundation plants were being eaten,” said Sullivan. “I was primarily using recommended lists of supposedly deer-resistant plants. … Local landscape nurseries told me that there’s hardly anything the deer would not eat if there are too many, or food is scarce.”

Sullivan contacted Peters and Allison about hunting the deer in her yard.

“They showed me the well-worn deer trails and how the deer had completely eaten the understory of the forest. I started monitoring when and where I saw the deer to let Matt know where to best place his deer stand.” Some of Sullivan’s neighbors also gave Allison permission to hunt on their land.

"What is not acceptable is to do nothing," said Canis. "Great Falls is a heavily wooded area, but in 20 to 25 years, the understory will be gone. That's not the legacy we want to leave behind."