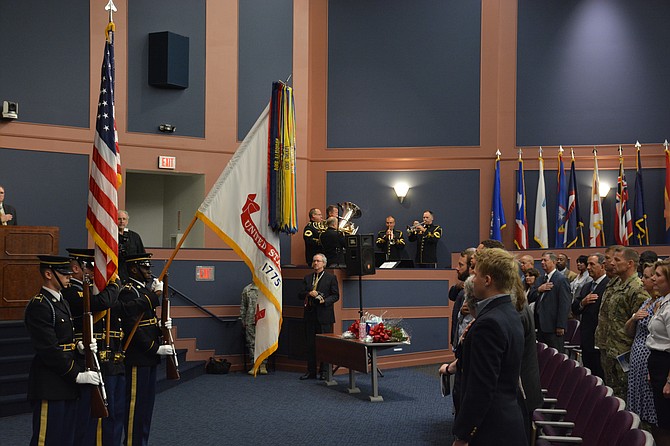 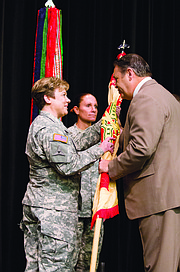 After master of ceremonies Terry Ruggles reminded the audience at Fort Belvoir of the U.S. Army’s age — 241 years — he said that it’s existence is “perpetuated on time-honored values and traditions, not the accomplishments of individuals.”

With that opening perspective of selfless service, Ruggles announced the change of command and change of responsibility for the Fort Belvoir garrison leadership ceremony taking place that day, the morning of Aug. 11.

The four leaders participated in a traditional rite of passing the garrison flag from one to the other, symbolizing the passing of command and responsibility.

In her remarks, Mitchell said it was “a bittersweet moment for me.”

After 28-plus years of service, she said, “when we passed the colors, it symbolized my last assignment in the U.S. Army.”

Both Mitchell and Guillory are retiring from the Army after leaving these posts.

Mitchell highlighted some of the achievements she’s overseen as commander, including partnering for the opening of Jeff Todd Way and widening of Route 1, and the opening of an all-new commissary in the next couple months.

“As a team,” Mitchell said, “we’ve achieved every goal we’ve set over the past two years.”

Guillory had some words of advice for the incoming leadership team: “Treat everyone with dignity and respect, and they will always get the job done.”

Incoming Boersma, originally from Flagstaff, Arizona, accepted the formal responsibility from Guillory. “The momentum and path of success, I promise, is in good hands.”

And Little Rock, Arkansas native Holbrook stopped short of announcing any sweeping immediate changes along with her taking command of the garrison.

However, Holbrook did introduce a new “command mantra” for her tenure: “Every day better,” she said.