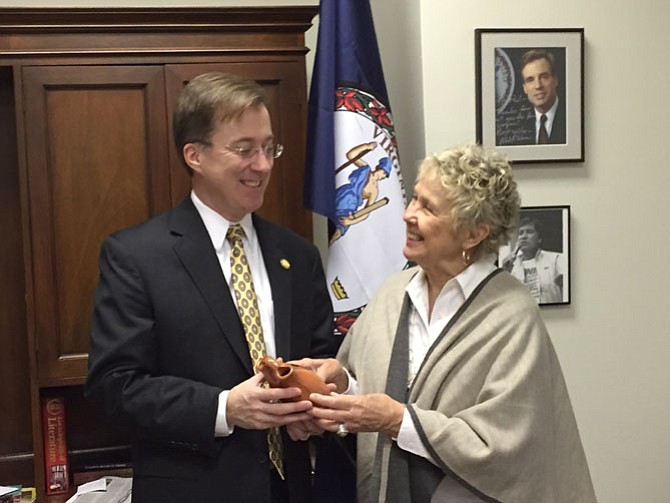 State Del. Paul Krizek shows off clay pot from the Pamunkey Indian reservation to Kay Smith. A photo of Olympian Billy Mills, the first American and American Indian to win the 10,000 meters, hangs in the background. Photo Contributed

Virginia’s 11 state-recognized American Indian tribes played an important role in Virginia’s history, specifically in the founding of European settlements at Jamestown. Without the early contributions of resources and knowledge that these tribes shared, settlements such as Jamestown would have failed.

During the 18th and 19th centuries, tribes lost, sold or were forcibly removed from their lands. The Pamunkey and Mattaponi are the only tribes still residing on portions their original lands. Too often, Virginia’s American Indian tribes receive little acknowledgement for the hardships they faced or the contributions they made.

I am raising awareness about Virginia’s indigenous tribes through two proposed pieces of legislation. This legislation is particularly timely because the Pamunkey Indian Tribe became the first Virginia tribe extended Federal recognition earlier this week.

HB 144 designates the Wednesday before Thanksgiving as Indigenous Peoples’ Day to raise awareness and provide recognition for Virginia’s Native Americans.

The day before Thanksgiving is the day when the Pamunkey and Mattaponi tribes present deer to the Virginia governor as part of a 338 year tradition. Through consultation with tribal leaders in Virginia they chose that day to be formally established as Indigenous Peoples’ Day. I am hopeful that this year we will be celebrating the Wednesday before Thanksgiving as Indigenous Peoples’ Day.

The number of people this legislation affected is very small — estimated at 60 students — and imposed a negligible cost to the state. American Indians are one of the most underrepresented minorities in higher education. This incentive could attract talent and diversity to our Virginia schools.

This small effort is quite literally the least we can do for our young American Indian students. Unfortunately, members of the legislature disagreed and tabled the bill in full committee. However, there are no final victories and no final defeats. I intend to continue championing social justice causes for our native peoples.

I believe that role our American Indian tribes played, and continue to play, in shaping the history and culture of the Commonwealth deserves to be acknowledged and appreciated. I will be a vociferous champion of causes for a people that receive so little, and yet deserve so much.