Chantilly: ‘Seeing What’s Changed ... And what has not’ since “To Kill a Mockingbird.”
Votes

Chantilly: ‘Seeing What’s Changed ... And what has not’ since “To Kill a Mockingbird.”

Westfield presents ‘To Kill a Mockingbird.’ 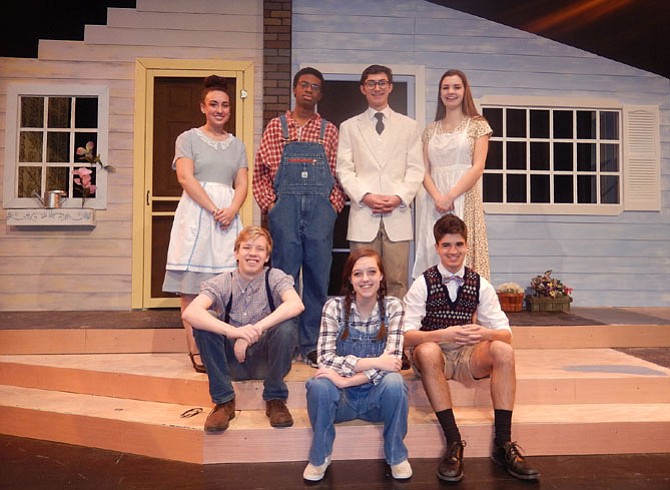 A volatile courtroom drama in 1930s Alabama comes to life in Westfield High’s production of the Harper Lee classic, “To Kill a Mockingbird.”

“This show takes the audience back to one of the most pivotal times in American history,” said Director Susie Pike. “It tells the story of Scout and Jem Finch and their journey to figure out who people really are. When their attorney father, Atticus, defends a black man accused of raping a white girl, they struggle to see the best in other people. At the same time, they’re busy trying to get the mysterious Boo Radley to come out of his house.”

Senior Zachary Szmerekovsky portrays Atticus Finch. “He’s a gentle, reserved, wise man, passionate about his family and justice,” said Szmerekovsky. “He’s moral, stands up for the truth and strives to teach his children the importance of courage, empathy and honesty. He’s the moral center of the town of Maycomb and the townspeople look up to him. Atticus also values education and teaches his children his beliefs and values.”

Playing such a strong and moral man, said Szmerekovsky, “I focus on my core beliefs of justice and morality to help guide me. He’s very deep, and I like bringing to life the famous character people have come to love from the book and play. We all tried our best to keep our characters as real as they are in the book, so this play will be iconic, nostalgic and memorable for the audience.” 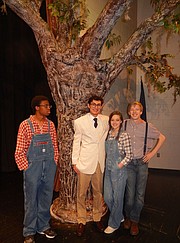 From left: Eni Oyeleye (as the defendant) with Zachary Szmerekovsky (his attorney, Atticus Finch) and Kaley Haller and Andrew Sharpe (Finch’s children) in Westfield’s “To Kill a Mockingbird.”

Junior Kaley Haller plays Scout, 6. “She’s an outgoing tomboy who matures as the story progresses and she deals with the struggles of a divided town,” said Haller. “She gains insight about the world around her as the trial forces her to understand racism and bigotry. Her father raised her to stand her ground and not be afraid to speak her mind.”

“I’m excited to play this character because of her complexity,” continued Haller. “Scout has a fearlessness and special awareness about her that I really admire. I’ve grown up with the story and relate to the messages Scout conveys. She brings a sweet innocence to the show’s heavy plot. This is honestly my dream role, and I’m thrilled for everyone to see it. ‘To Kill a Mockingbird’ is such a classic story, and the message kind of still applies to today’s society, so I think the audience will take something away from it.”

Portraying the defendant, Tom Robinson, is senior Eni Oyeleye, who’s also assistant directing. “Robinsion is unfairly targeted for a crime he didn’t commit and is found guilty simply because he’s black and his accuser is white,” said Oyeleye. “In the 1930s deep South, that’s all that’s needed to ensure his conviction. Atticus Finch is determined to make sure justice is served. But unfortunately, his passionate plea for equality under the law is no match for the prevailing social currents of the time.”

As assistant director, said Oyeleye, “It’s been incredibly exciting to help shape our production of one of the 20th century’s most beloved and iconic stories. I feel a sense of duty to tell this story well because the issues it talks about are important, not only from a historical perspective, but also from a modern one. Much progress has undisputedly been made since the days of Jim Crow laws; but sadly, much of the volatility and tension present in the 1930s doesn’t seem to have abated.”

Noting that an actor’s job is to tell an “honest and compelling story,” Oyeleye says this cast is doing just that. “The audience will be moved and impressed by the ability of the actors to display immense, emotional depth and to play their roles as real characters, rather than caricatures,” he said. “And I believe the audience will leave the auditorium as hopeful and joyous as they are touched and sad.”

Senior Andrew Sharpe plays Jem. “He’s a mature 10-year-old who lives an imaginative life with his sister, creating stories about their so-called crazy neighbor, Boo Radley,” said Sharpe. “He becomes disenfranchised with the justice system when he discovers the inequality that exists in the world and in his own town. But he admires his father’s efforts to defend Robinson despite the hopelessness of a fair trial.”

Sharpe’s “thrilled to play this role” because he believes Jem has the greatest character arc in the play. “His loss of innocence is something truly tragic,” said Sharpe. “I love this story and how it will never become irrelevant in the world. With so much inequality still existing in America, I hope everyone can once again learn the timeless lesson of loving one another.” Besides that, he added, “Our beautiful set and wonderful cast will really appeal to the audience.”

Playing Scout and Jem’s friend Dill is senior David Johnson. “Dill accompanies them on many adventures,” said Johnson. “He has an oddball personality — imaginative and fun-loving while wise beyond his years — which makes him fun to play.”

“The audience will like the show because it has a lot of depth,” continued Johnson. “It tackles the serious topic of race, but there are light moments along the way. And our immensely talented cast and crew are putting their all into this play. The audience will laugh, maybe even cry, but will definitely leave the theater with food for thought and fuel for discussion. That's what makes this show extra-special.”

Narrating and playing the Finches’ neighbor Maudie Atkinson is senior Alexa Tucker. “She’s sensible and wise, but has a sharp wit and some sass,” said Tucker. “She’s protective over Jem and Scout, but knows when to let them fight their own battles.

“Miss Maudie feels strongly that Robinson deserves a fair trial, yet she knows the deeply ingrained racism of the townspeople won’t allow justice to be served. But she remains optimistic for the future. I like portraying her wisdom, sensibility and kindness — qualities I hope to emulate both on and offstage.”

Tucker believes audiences will enjoy seeing this “classic novel brought to life. The issues in the play are as relevant today as they were in 1935, and I think people will appreciate the chance to observe what has changed — and what has stayed the same.”